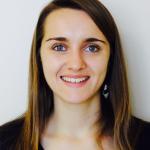 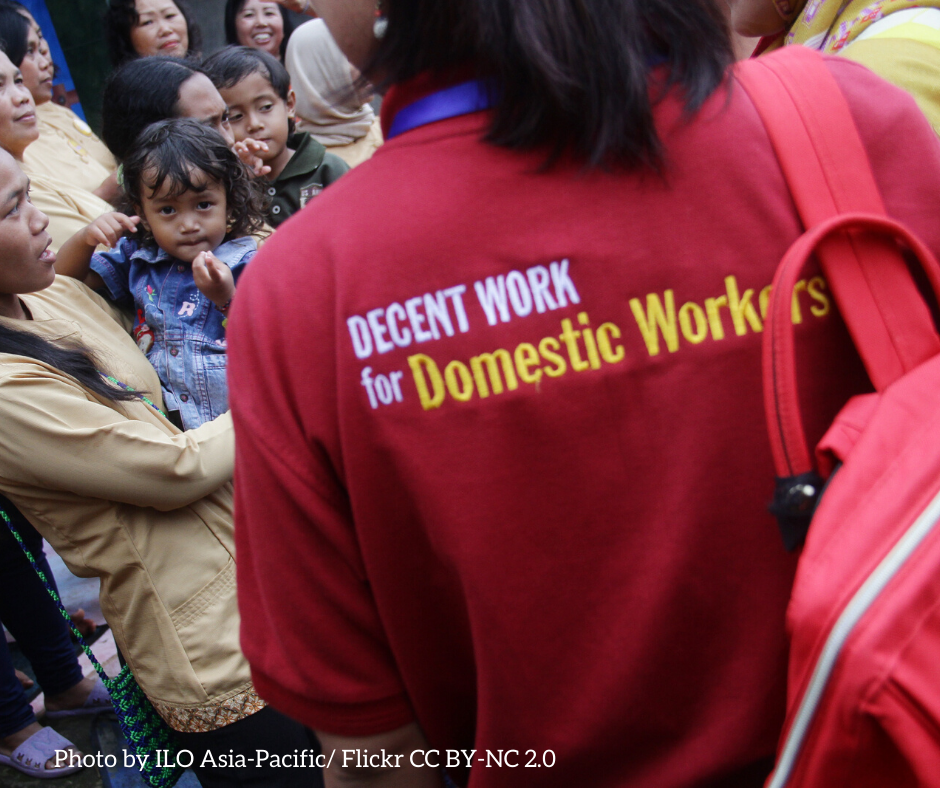 The webinar was co-organised by the SPIAC-B Gender Working Group and aimed to discuss the impacts of the current Covid-19 crisis on paid and unpaid care work, and the role of social protection policies to respond to these impacts.

Rachel Moussié (WIEGO) and Debora Diniz (IPPF/WHR) presented their work and reflections on the topic, joined by Valeria Esquivel (ILO) as discussant. The webinar was moderated by Shahra Razavi (ILO).

This webinar also marked the relaunch of the Gender-responsive Social Protection Online Community on socialprotection.org, managed by the SPIAC-B Gender Working Group. This online community aims to promote collaboration between social protection and gender practitioners, foster evidence-informed policy dialogue, coordinate our efforts to build political commitments for gender-responsive social protection, and amplify the impact of our work. Activities planned for this community include other webinars, selected content on gender and COVID-19 and curated publications with the latest research on gender and social protection.

Shahra Razavi started the webinar by highlighting how the current crisis, just like other crises in the past, is showing the devastating effects of not having universal social protection systems in place. Moreover, the crisis is revealing once more existing structural inequalities, as different groups are affected differently, depending on race, gender, class and other social accents. The effects of the crisis on women more specifically, depends on where they are in labour markets (i.e. in which sector) as well as on their labour relations (i.e. formal vs. informal work).

Rachel Moussié focussed her presentation on domestic workers, who are often overlooked by public policy makers. Yet, domestic workers provide essential services, such care to the elderly and children, enabling other adult household members to do paid work.

It is estimated that there are about 70 million domestic workers around the world, 70% of whom are women. Many of them suffer from discrimination based on gender, race, class and migration status. Moreover, in many counties, domestic workers are not recognised in labour codes, which has implications for their access to social protection.

Rachel discussed the impacts of the current crisis on domestic workers based on the findings of two recent reports, namely ‘The Impacts of COVID-19 on Domestic Workers and Policy Responses’ from the International Domestic Workers Federation and the  Rapid Assessment of Impact of public health measures on informal workers' livelihoods conducted by WIEGO.

Domestic workers are affected by the current crisis in three main ways, namely:

1) Income risks: many domestic workers are experiencing unpaid leave and loss of employment. Moreover, lockdowns and curfews make travelling to work difficult. Migrant domestic workers are particularly affected, as they have found themselves often jobless and locked within host country.

2) Health risks: domestic workers are often exposed to Covid-19 through employers and have no access to personal protective equipment (PPE). In addition, they are at heightened risk of violence and abuse, which is compounded by factors such as gender, class and race.

3) Care work: domestic workers are also experiencing an increase in care work in their own homes due to school closures.

Turning to the question of how social protection mechanisms can protect those workers, Rachel looked at two main mechanisms, namely unemployment benefits and non-contributory cash transfers. There have been some examples of horizontal expansion of unemployment insurances, such as in Spain and South Africa. However, these schemes usually only reach a fraction of domestic workers due to their informality. This makes cash transfers an important measure for domestic workers and across the globe there have been many examples of horizontal and vertical expansion (see figure below). Nevertheless, many domestic workers remain excluded, which in some cases has to do with the fact that women have less access to phones and bank accounts. Moreover, these transfers are usually very short in time, highlighting the need to extend these benefits beyond the lock down period 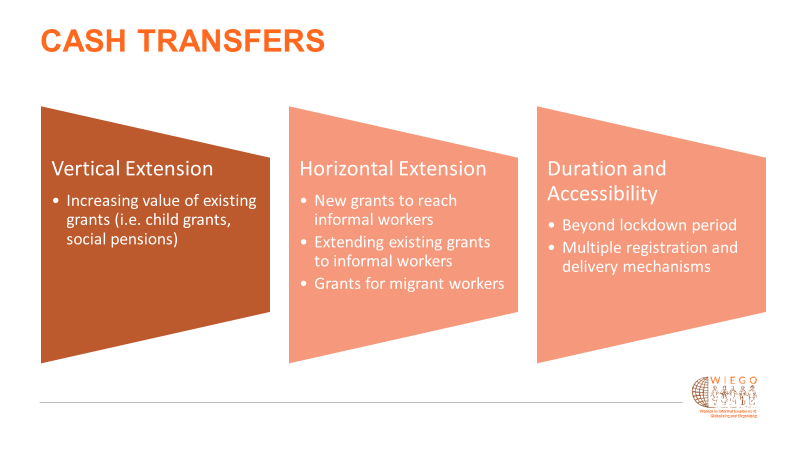 Finally, Rachel emphasised the need to include domestic workers as care workers in broader economic recovery packages as many of them will be affected by permanent job losses. Responses will need to go beyond social protection responses and include, among others, public childcare services. Finally, there is a real need to make the voices of domestic workers more heard and include them collective bargaining structures.

Drawing on her research on the Zika crisis in Brazil, Debora Diniz reflected on gender inequalities of our bodies and whether the current crisis can potentially lead to a feminist transformation. In her view, the growing number of social protection responses and the increasing understanding that the crisis is impacting unequally on women, can lay the ground for a potential feminist transformation (see figure below). Both of these factors were not present in previous health crises, such as the Zika crisis. 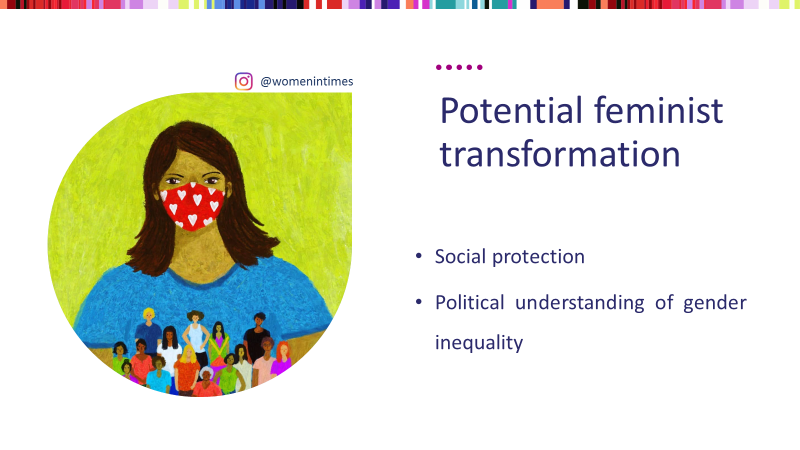 Debora started off by putting a face on some of the victims of the COVID-19 pandemic in Brazil. One of the first victims was precisely a domestic worker, whose name was not mentioned in the media, making her an anonymous body. Another victim was a 2-year-old girl, who had the congenital Zika syndrome. The media’s focus of the girl’s death was more on the weakness of her body than on herself as a person or on her mother. The way that they were presented in the media tells a lot about the gendered inequalities of our bodies and how the virus is putting some of us at higher risk than others.

Drawing on her research on the Zika crisis, Debora also highlighted that women are always at the centre of health crises due to their role as care givers. Yet, while there could have been lessons learnt from the Zika crisis, those were not used, mainly because Zika did not affect everyone but mostly poor women from the Global South. In terms of social protection, the responses to women affected by Zika were very limited and far away from a right-based approach.

Debora argued that there is a strong need to put women and their basic needs at the centre of health crisis responses. In this vein, social protection responses should not only be considered palliative but as central to our survival. Moreover, it will be key to provide access to other basic services, such as transportation and water, which are essential to the provision of care, as the experience form the Zika crisis has also shown. If this is considered, there is room to believe in the gender-transformative potential of the current COVID-19 crisis.

Valeria Esquivel reflected on both presentations, drawing on findings from the 2018 ILO Care Report. As the report shows, care work is a significant source of employment. This includes domestic workers but also health and education workers. In total, there are about 381 million care workers of which 249 million are women.

The levels and composition of care employment in all countries are influenced by factors, such as their level of development, labor markets, migration policies, and the extent of their health, education and care services. A cluster analysis of the care workforce in 99 countries identified eight distinctive models of care employment and found two main sources of variation between these clusters. First, the proportion of employment in health and social work, driven by the coverage of health care and long-term care services. Secondly, the proportion of employment in domestic work, which in many cases comprises a disproportionate number of migrant domestic workers. In the Northern European countries, for example, the care workforce represents almost 30 % of total (and 40% of women´s) employment, whereas for countries in Africa, the care workforce accounts for less than 5 % of total employment.

Valeria highlighted two other important points for the discussion of the webinar.  First, research shows that a high presence of domestic workers can be explained by high levels of inequality. Secondly, the Global South health systems are often unfunded, resulting in more precarious work conditions, and putting health care workers at higher risk of the virus.

Finally, Valeria presented the 5 R framework (see figure below) for decent unpaid and paid care work. The framework is based Triple R framework (Recognise, Reduce and Redistribute) plus two additional dimensions, namely Reward and Representation. The latter refers to the need to make care workers´ voices heard, as also highlighted in Rachel´s presentation. 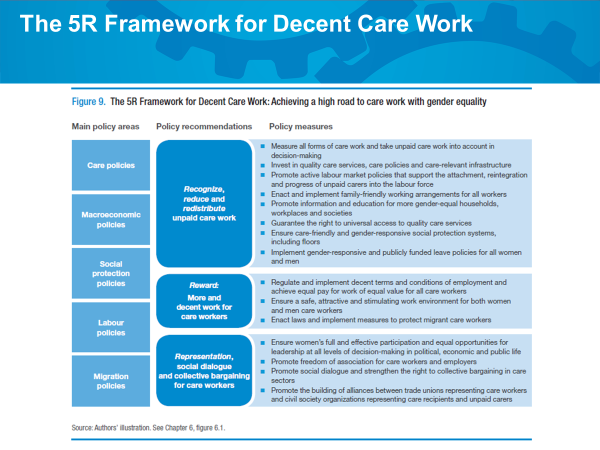 This blog post is part of the Social protection responses to COVID-19 webinar series. The series is a joint effort initiated by the IPC-IG, GIZ on behalf of the German Federal Ministry of Economic Development and Cooperation (BMZ), and the Australia Government's Department of Foreign Affairs and Trade (DFAT) collaboration with the socialprotection.org platform, and in cooperation with partners from different organisations.

Join our online community ''Social protection responses to COVID-10 [Task force]" to learn more about the initiative and future webinars.