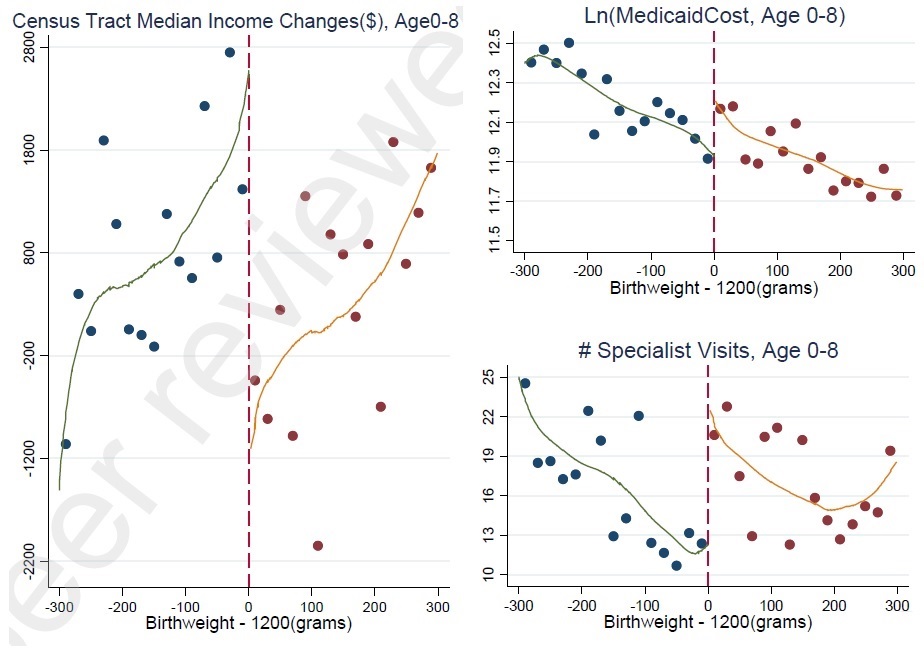 A small investment with sizable returns! In New York State, low-income children born below a birthweight threshold (1,200 grams) are automatically eligible for Supplemental Security Income. This involves the provision of cash for an average of 40% of the food poverty line for a family of three over a year. A preliminary study by Ko et al traces the effects of SSI on children’s health conditions and medical costs over a period of 8 years: it found that children born with a birthweight below the 1,200-gram cutoff are less likely to be affected by acute health conditions (infection, injury) and chronic ones (malnutrition, developmental delay); they also become more likely to live in better-off neighborhoods and are less likely to be admitted to hospital. Children also incur 23% lower medical expenses: in fact, an additional month on SSI between birth and age 8 is associated with a 1.8% reduction in cumulative Medicaid costs.

Speaking of spending, a great paper by Hoy asks a huge question: under what conditions are people willing to pay taxes? His experiment with over 30,000 respondents in 8 middle-income countries reveals that a key determinant is providing accurate information that taxes are progressive. In other words, “… [t]ax reforms that improve progressivity could have an additional benefit by increasing people’s willingness to pay tax. [To the contrary] tax reforms that reduce progressivity could in turn decrease people’s willingness to pay tax. [Therefore] tax reforms that reduce progressivity, which were intended to improve the fiscal position of a country, could undermine tax compliance to a point whereby the net impact on revenue is negative” (p.36).

That’s not all on fiscal issues! A super-rich public expenditure review for social protection in Egypt was just published by the World Bank – so much to sort through, for example see figure 2.7 on an effectiveness index by social assistance instrument, and figure 2.5 showing that spending on subsidies is 6 times higher than on cash transfers (a separate PER volume examines health and education spending). And what would be better than subsidies in the MENA region? A universal basic income, according to a blog by Alfani et al. Bonus on UBI: Chrisp and De Wispelaere host a special issue of the EJSS journal dedicated to UBI pilots in Europe, including 8 articles discussing evidence, politics, framing, reforms, and cross-country influence.

Since I mentioned the World Bank, the institution just released an update of its Social Protection and Jobs strategy, aka “SPJ Compass”. Geared toward achieving universal social protection, the new strategic framework charts 5 priority areas of work, including addressing gaps in relation to delivery systems, coverage, adaptiveness, jobs, and financing (with women empowerment and climate change as cross-cutting themes). Check out a range of accompanying materials, such as the recording of yesterday’s report launch, a crisp two-pager, and a blog by Rutkowski. See also the ITUC response to the Compass and a paper by Sibun, published earlier in the week, offering a critique of the Bank’s approach to universality.

Let me get back to adaptiveness, with a paper by Abay et al that revisits poverty trends and the role of social protection in the region during the pandemic. It finds that the effects of Covid-19 on poverty were less severe than previously estimated, with increases by 1.5-1.7 percentage points in 2020. On the social protection response front, figure 11 (p.28) provides a handy compilation of estimates on beneficiary – assistance was highly progressive in rural Ethiopia, Tunisia, Morocco, and Egypt; it was regressive in rural Nigeria; and a little mixed in South Africa, urban Ethiopia, and urban Nigeria.

More on Ethiopia, where a new paper tackles an old issue: Tigistu and Hegena dust off the theme of food aid in two SNNPR districts, which they document helps “… feeding poor households, saving lives, develop infrastructure, and improve school attendance”. But such support also creates a “… dependency mentality to people caused by prolonged aid-dependency, loss of skills or aspiration failure”.

Moving to the Sahel, an article by Premand and Stoeffler combines experimental and satellite data in Niger and shows that cash transfers increase household consumption by 10% percent on average, especially among drought-affected people. Double-bonus on shocks: Brunelin and Lain argue that seasonal deprivation in the Sahel can be anticipated and addressed, and Ghorpade reflects on lessons learned from the 2010 floods in Pakistan and their relevance for ongoing responses in the country.

Now this one from LAC is really cool as it tackles a tough issue: trust. In Peru, Galiani et al estimate that a 3-hour training for Juntos cash transfers beneficiaries increased their trust in financial institutions, which in turn led to higher savings (+0.4-1.4 percentage points).

Final fireworks: an OECD database lays out mismatches between skill supply and demand in 43 countries; a CaLP report by Tonea and Palacios examines how different across are dealing with cash transfers registration, targeting and information systems in Ukraine; an interesting piece by Lekakis and Liddle chronicles how the Greek city of Thessaloniki was able to invest in development despite fiscal austerity; and looking for a good podcast? Check out the NYT’s Daily on why child poverty declined in the US (h/t Emily Weedon).