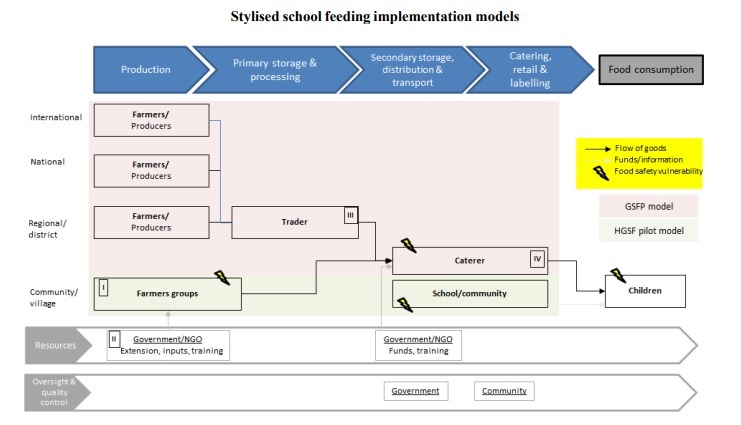 Let’s kick off with a duet of papers on a social protection instrument that is both ubiquitous and sometimes underrated: school meals! In the US, the Community Eligibility Provision (CEP) provides free meals to 13.6 million students on a universal basis, i.e., regardless of family income. Marcus and Yewell show that the program represents a household net income transfers of up to $39/month (via less grocery expenditures); it reduces families’ cash shortage by 11%; improves dietary quality by 3%; and curbs food insecurity by 5%. Importantly, its universal nature increases participation of the poorest households by reducing stigma of receipt and application costs. Pending on food procurement practices (see figure above), school feeding may also constitute a potential market for local farmers: in Ghana, a new paper by Gelli et finds that while the national school meals program “… may have provided increased access to a school feeding market for smallholders at the school-level, there were no effects of the intervention on smallholder agriculture outcomes”.

From agriculture to urban areas in region! Ethiopia’s UPSNP program provides, among other interventions, public works paying $2/day in 11 cities (70% of beneficiaries were in Addis, where 18% of the capital’s households were enrolled). An evaluation by Franklin et al compares the effects of those programs against an unconditional cash transfer. What did they find? Cash performs better when strictly compared to public works as an income transfer scheme; but if general equilibrium effects on wages and neighborhood quality are considered, public works tend to be a superior program (e.g., see figure 4, p.30). Bonus: in Zimbabwe’s city of Bulawayo, Ndlovu et al found that bimonthly urban unconditional cash payments ($10-25/month) didn’t reduce food insecurity (among key challenges were low transfer size, outdated household information, and rigid payment systems).

A paper by Kuss et on Uganda, however, discusses the economic effects of the Senior Citizens Grant, a program covering about 370,000 Ugandans above the age of 65 with $16 every two months. The paper articulates impacts on different sectors (transportation, telecommunication, credit, agricultural wage labor, agricultural production, and non-farm trade) as well as on direct recipients, secondary beneficiaries, and tertiary impacts on local economic structures (see nice framework on figure 1). The SCG increased the ability of recipients to pay for transport, which in turn improved the local motorcycle-taxi business; it augmented the use of mobile phones by recipients (but not in remote areas); it helped to save more and access informal credit; it had mixes effects on subsistence wages, which increased in remote locations but not in others; and it increased agricultural production through investments in seeds and agrochemicals. Importantly, there are “…strong benefits for non-recipients who worked as vendors in both remote and integrated area”.

More on cash in Africa, but from a human capital perspective: in Northern Nigeria, an experimental evaluation by Carneiro et al examines the effects of a cash transfers program (CGDP) on fertility. Once pregnancy is confirmed (via a urine test), the program provides unconditional cash transfers ($22/month from the time in utero to the child’s 24th month), accompanied by information on recommended practices on pregnancy and infant feeding. The study finds “… precise null impacts on the fertility dynamics of women not pregnant at baseline”. Such effects, the authors argue, are likely to be observable in other contexts where women have agency and labor market opportunities. Also, because of the fact that “… transfers are only available for one child, and fertility rates are high to begin with, households might be secure in the knowledge that they will eventually receive the transfers without having to adjust their planned fertility path”. BTW, the program also reduced stunting by 22%! (h/t Amber Peterman).

… and from “null” to “negative” effects on fertility! A paper by Laszlo et al estimates that in Peru, women participating in Juntos conditional cash transfers display a reduction in fertility – an effect that persist up to 6 years after the intervention is rolled out. IN line with the prediction by Carneiro et al I mentioned above, it appears that Juntos allows women to “… gain some control, albeit covertly, over their reproductive choices”. Relatedly, the program is associated with a 5 percentage point increase in the take-up of modern contraception. How did that occur? A possible mechanism could be that “… pre-natal and infant health check conditionality exposes them to reproductive health information and care” (h/t Tomoo Okubo).

Additional evidence on children-related effects of cash from the other side of the Pacific! Australia’s Baby Bonus (ABB) program provides a one-off unconditional cash transfer ($2400) to families with newborns. A new paper by de Gendre et al found that the program reduced preventable pediatric illnesses (like bronchiolitis), while increasing “elective hospital care” (which require medical referrals) in the second year of life of the baby. About one-third (34%) of the program costs were recouped via less hospitalizations! Bonus on East Asia: ESCAP has a note on “implementing gender-sensitive civil registration and vital statistics systems through a life cycle approach” (h/t Valentina Barca).

Moving to Covid, a big paper is just out: in Brazil, the Auxilio Emergencial program provided 5 rounds of cash transfers ($155) to informal workers and the unemployed. A study by de Leon et al found that AE reduces the chance of reporting Covid by 15% (see detailed discussion of results on p.15). How? By allowing beneficiaries to work slightly less (a reduction between 2.7 to 3.6 hours/week), hence being less exposed to infection risk.

Speaking of the pandemic, Spasova et al (eds) have a nicely edited set of 8 country case studies on social protection for self-employed and non-standard workers in Europe, including Belgium, France, Ireland, Italy, Lithuania, Portugal, Romania, and Sweden. The overall picture that emerges confirms that responses did help, but some preexisting structural gaps persisted. For example, in Belgium most social protection measures “… did not reach people in the new forms of non-standard work, such as platform workers, people in flexi-jobs or in the share economy”. Bonus: early estimates of EU social protection expenditures for 2020 have just been released: compared to 2019, they increased between 28% (Malta) and 4% (Sweden).

Two resources on universal basic income! Do trade unions support the idea? According to Cigna, unions’ attitudes towards UBI vary among contexts: unions from Bismarckian and Nordic countries are generally opposed to a UBI, while those from Liberal and Mediterranean countries tend to embrace it (h/t Gunnel Nycander). And from a financing perspective, Santens argues that Modern Monetary Theory “… may just be the key to achieving UBI, and perhaps even the only way”.

And let mne conclude with some fantastic past and upcoming events: check out the launch of a report on supporting informal sector workers with social protection (the paper will be featured in detail next week); recordings of webinar on “cash plus” approaches to HIV and health are now available (h/t Tia Palermo); while an event on connecting public finance management and social protection in Senegal and Nepal and a ministerial forum on the future of social protection in MENA are coming up on Nov 25 and 30, respectively.