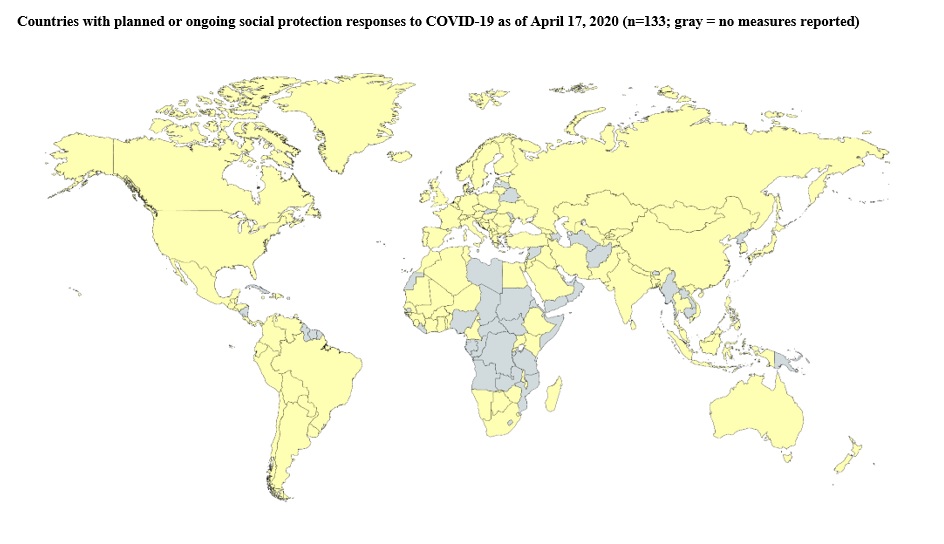 Over these weeks, we quickly moved from highlighting where the action is… to spotting where it’s missing! Will perhaps next week’s map be fully colored?

Here are the 10 key numbers of the week — check out the the 5th edition of the Country SP COVID responses_April17!

133! As of today, a total of 133 countries have planned, introduced or adapted social protection and jobs programs in response to COVID-19. This represents a net increase of 7 countries since last week, with new entries being mostly from Africa (Barbados, Kuwait, Malawi, Saint Lucia, Sao Tome, Sierra Leone, and Zimbabwe).

564! The number of programs grew by 12% since last week, i.e., from 505 to 564. Among classes of interventions, social assistance (non-contributory transfers) keeps being the most widely used (including a total of 352 measures), followed by actions in social insurance (134) and supply-side labor market interventions (78).

1/3! Within social assistance, cash transfer programs remain the most widely used intervention by governments. Cash transfers include 161 measures in 87 countries, with 102 new initiatives introduced specifically as COVID-19 response in 50 countries. Those 161 programs would increase to 193 if other cash-based programs like social pensions, etc., are considered. Such overall cash transfer portfolio represents over one-third (34.2%) of total social protection measures

56! In terms of social insurance, paid sick leave and unemployment benefits are the most frequently adopted measures. Together, they account for 56% of action in social insurance. Sick leave is present in countries like Algeria, El Salvador, Finland and Lebanon. Unemployment benefits are reported, for example, in Romania, Russia, and South Africa. Deferring or subsidizing social contributions are observed, among others, in Montenegro, Germany and the Netherlands.

60! Labor market interventions continue to be an important area of action, especially in the form of wage subsidies. These account for 60% of the global labor market portfolio, with programs being implemented in Jamaica, Kosovo, Malaysia and Thailand. Activation measures (worker trainings) are also being considered inter alia in Bosnia and Herzegovina, China and Romania.

102! There is progress across all regions. Sub-Saharan Africa includes 4 new countries and 12 novel measures. The ECA region has recorded a sizable increase in social assistance programs specifically, namely from 85 to 102, with the LAC region also witnessing a surge of 15 measures across social protection and labor markets.

240! Middle-income countries being the epicenter of action. Low income countries have the least number of programs, but they also rose in both countries (3) and measures (7). With a combined set of 240 measures or 68% of all programs, middle income countries –and especially upper-MICs – catalyze significant action (an increase of 17% from last week).

4! The number of countries with one-off universal cash transfers is now 4. Japan just joined Serbia, Hong-Kong and Singapore in planning such measure – kind of at the intersection of UBI and helicopter money.

Hope this helps for your work, and stay safe!