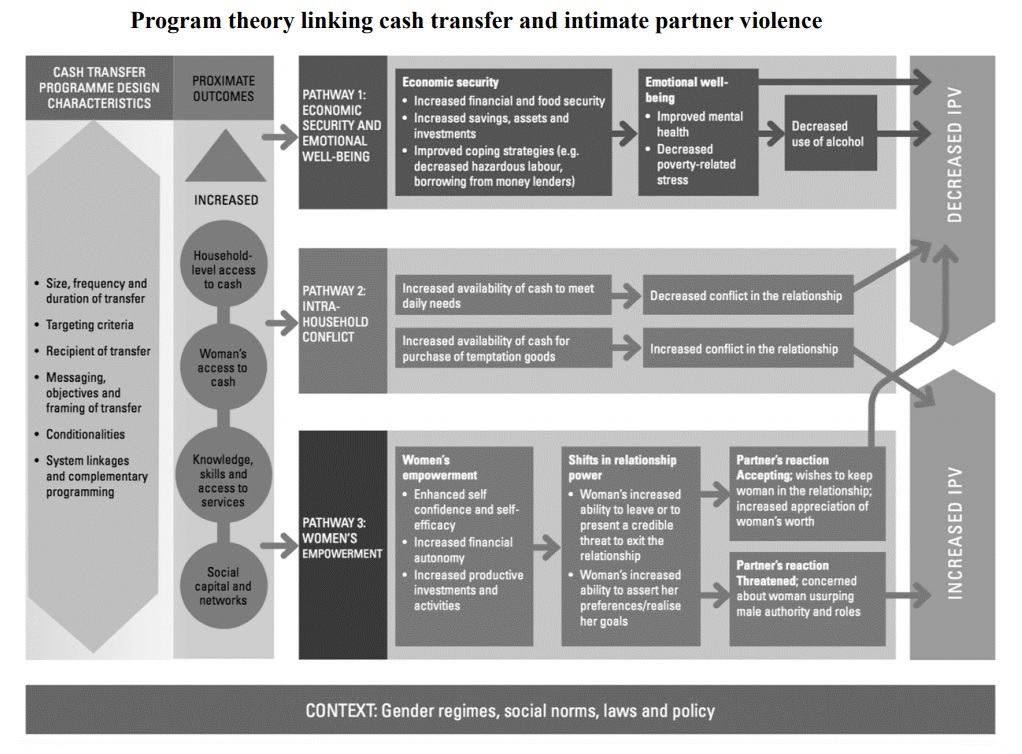 Let’s start with fresh evidence from Ghana on cash transfers, gender and intimate partner violence (IPV)! Peterman et al evaluate Ghana’s LEAP 1000 program, which delivers bi-monthly cash transfers (equivalent to 14% of household consumption) and premium health insurance waivers to economically disadvantaged mothers and pregnant women. Findings indicate no significant impacts on the probability of experiencing IPV in the last 12 months, nor on sexual IPV or controlling behaviors. However, there are sizable decreases on particular dimensions, such as the frequency of emotional, physical and combined IPV in the same period (0.09-0.12 standard deviations). Also, women in monogamous partnerships experienced reductions in those dimensions by 11-15% relative to baseline. How did it happen? More economic security (reduction in poverty and increase in expenditure) and women’s empowerment (including increases in women’s savings and social support).

Bonus on gender: Bourgault et al have released their fourth edition of resources on violence against women and children during the pandemic, including lessons from 26 studies. And check out their fantastic excel literature tracker!

Double gender bonus! Behavioral responses to cash transfers… can be of administrative nature: Rubio-Sanchez et al show that in Mexico, eligibility to conditional cash transfers required participant households to be female-headed, which induced about half of the poorest households to formally change the family head accordingly (see figure 3, p.9).

Speaking of eligibility, can “lotteries” be a suitable targeting mechanism for public works in fragile settings? Drawing from a program in DRC and evidence from other countries (e.g., CAR and Cote d’Ivoire), Bance and Schnitzer argue that the lottery-based public works (i.e., participation based on random selection occurring in a public event) have an inherent self-targeted nature which makes them efficient; that they display higher rates of perceived fairness comparted to other methods (e.g., see figure 1, p.5); and that their operational simplicity makes them a potentially rapid, off-the-shelf model.

Let’s remain in the fragility domain: Klein and Tholstrup reflect on how humanitarian cash transfers rapidly evolved from “… fringe interest to central pillar of humanitarian response”. There is also an interesting CaLP podcast taking stock of such evolution featuring Mahmood, Bailey, Timmins, and Rizvi. Bonus: on May 5, Sutton is launching her book, The Humanitarian Civilian.

Moving to health, there is a good review on the impacts of cash transfers on health-related outcomes: Sun et al recap key findings from the literature, and while the paper doesn’t present an overarching quantitative synthesis, it usefully underscores the importance (and diversity) of design choices, the need to understand transmission mechanisms, the role of structural health drivers, and the paucity of data on costs.

A big question: can cash programs help win elections? An interesting blog by Ravi suggests that cash transfers (and other interventions) played an important role in Bihar’s political state assembly election, i.e., a positive one for those that promoted such measures (her full article with Kapoor is forthcoming in IJHD).

Lots of great materials on labor and skills (h/t Michael Weber)! First a tantalizing issue: can older workers be retrained? Fang et al found that in Canada the average probability of receiving training was 9.3 percentage points higher for younger (25-49) compared to older (50+) workers. Older workers, they argue, require tailored training, including slower and self-paced instruction; hands-on practical exercises; modular training components that build in stages; familiarizing them with new equipment; and minimizing required reading and the amount of material covered.

Let’s take a glimpse at urban Africa: de Weerdt et al examine the puzzle of while rural-to-urban Tanzanian migrants increase their welfare more by moving to cities, most migrants still head to smaller towns. The explanation is that they are too far: “… distance to cities (compared to towns) largely trumps the attraction from their promise of greater wealth, making towns more appealing destinations” (h/t Luc Christiaensen). Urban bonus: Duval Hernandez estimates that in Mexico, 80% of informal workers in large urban areas would prefer to work in a job that provides formal social protection.

Effects of possible reforms! Datta and Kingdon show that India could save $19.4 billion/year by increasing pupil teacher ratios from its current 22.8 to 40, without any reduction in pupil learning. And Aguero et al estimate that in Peru, extending the school day increases math test scores, with a large effect size relative to other interventions. It also improved reading, technical skills and socio-emotional competencies. Bonus on early years investments: Lin and Chen documenting how in China, exposure to disadvantaged childhood circumstances can exacerbate cognitive deficit and its decline over time.

Since I mentioned investments… a report by Ortiz and Cummins estimates that nearly 50 governments are projected to be spending 2.9% of GDP less in 2021-22 than in 2018-19, with budgets that are about 12% smaller. See also their blog on their analysis.

Final assortment: In the latest Poverty Unpacked podcast, Roelen discusses the theme of “digitizing the fight against poverty” with van Veen and Faith; UNICEF has a handy table with alternative child poverty metrics and estimates; Krugman thinks that Yang hasn’t done the math for his UBI proposal; can’t build back better without building a better state, argues Mazzucato; and some powerful infographics show how inflation is impacting Lebanon, e.g., food prices increased x 5 since 2019.