So let’s get started with a great report by Hyee et al setting out a range of facts on cash transfers in the OECD. For instance, about 1/4 of poorest 20% is covered by those programs; the rich sometimes better covered than the poor; cash is mostly means-tested; and accessibility of benefits is highly variable (probability of receipt among the eligible is 20-100%, including being systematically lower for means-tested schemes as opposed to other forms), and so is the amount provided (10-40% median income).

From Europe to Africa: the region is the least urbanized, but the fastest-urbanizing: so what’s the experience with cash transfers in urban areas? How should they be adapted in design and implementation? Our new report “Cash in the City” reviews facts and analytics related to urbanization, identifies global lessons on urban safety nets since the 2000s, and offers practical insights from a new generation of 11 ongoing programs in Africa. 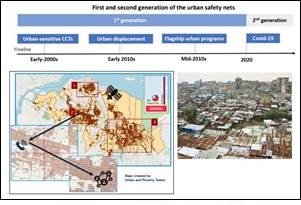 Let’s stay in the region, where results are kicking in on how cash transfers are mitigating the effects of the pandemic. Evidence from Ethiopia by Abay et al shows that Covid-19 increased food insecurity by 11.7 percentage points and the food gap by 0.47 months; but among people covered by the Productive Safety Net Program (PSNP), those numbers are only 2.4 and 0.13, respectively. Similarly, in Uruguay the pandemic augmented poverty by 38%. A new paper by Brum and De Rosa shows that cash transfers helped, but fully mitigating the poverty increase would cost an additional 0.46% of GDP. 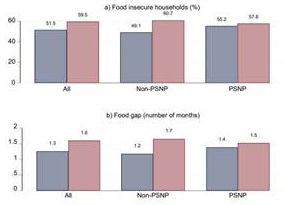 But informal provisions are also key, in crises and beyond! A fascinating paper by Evans and Kosec finds that in Tanzania, cash transfers not only increase trust in government, but also don’t eliminate informal safety nets in the long run. It is interesting to note here the shots in trust occurring within the early phases of provisions: “… beneficiary households report a slightly lower likelihood of trusting “most people” after 1.75 years of transfers (they experience a marginally significant decline of 6.2 percentage points). But after an additional year (i.e., 2.75 years of transfers) this initial erosion of trust is gone [and] we see a broad pattern of increased trust in others after the program has been in place for a significant period of time” (p.5-6).

New experimental evidence from Hidrobo et al shows that in Mali, the national cash transfer program (Jigisemejiri) – which provides beneficiaries with 30,000 FCFA every 3 months for 3 years, and delivered information sessions on nutrition, finances, and health – had a range of effects. Among them, it improved household decision-makers’ perceptions of food security, self-esteem, patience and reduced self-reported anxiety. Also, people receiving transfers had assets of 21% higher value than the control group, and were 57% more likely to save.

Cash transfers are… enlightening! By utilizing cash for, among others, solar lanterns and grid electricity, research by Aung et al in Malawi shows that transfers increase the chance of having a lighting source. As also shown by recent evidence from Pakistan, such spending patterns highlight the need for energy transitions. 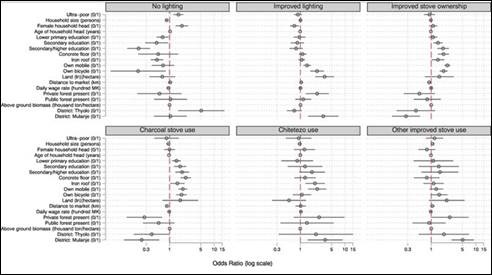 Speaking of how people use cash… Israel provided a one-off universal cash transfer ($220/adult, $150/child), or about 0.46% of GDP (to be precise, only a tiny share of the top income earners was left out). Feldman and Heffez show that cash was mostly used for debt payments (42-52% of respondents), followed by consumption (25-31%) and savings (15-18%). (BTW, I loved the discussion on p.18 on transfer size, its usage and mental accounts!) Interestingly, the paper estimates that about 14% of better-off people donated their transfer to those most in need. For instance, an online crowdfunding campaign called “Move it Forward” collected nearly $5.6 million from 21,600 donors—about $260 per donation, on average. 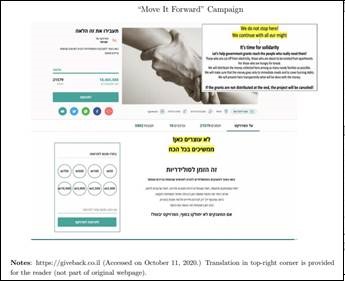 What do we know about the long-term effects of social assistance? New evidence from a multi-arm program in Bangladesh by Ahmed et al shows that after 4 years, impacts were persistent for cash transfers combined with nutrition information and activities; for cash alone, effects were smaller and more localized (with sizable difference between North and South of the country); and no effects were detected when providing food alone. 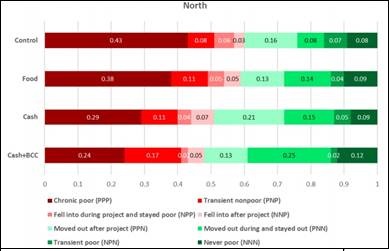 More on Bangladesh! A thought-provoking paper by Hossain asks whether there is a trade-off between delivery and accountability. By examining a program paying cash transfers on mothers’ mobile phones, she concludes that the model “… connects the government directly to people, but lacks [the mechanisms] to hold the government accountable”. 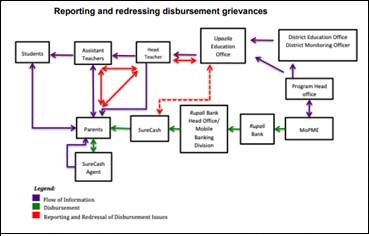 In the meanwhile, in neighboring India… informal slum leaders undertake an array of activities! Based on phone surveys of 321 leaders across 79 settlements in Bhopal and Jaipur, a paper by Auerbach and Thachil reveals that slum leaders help with day-to-day problem-solving; handle request for government relief (especially food assistance); make claims; and collect administrative information. However, they also rely on partisan networks, which can affect and politically skew some of their activities. Bonus on India: Kühner et al are critical of the country’s pandemic response, which they argue “… relied on the existing inadequate safety net, and was not timely enough to support millions of inter-state migrants”. 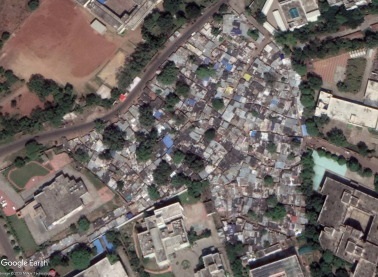 BTW, will Covid fuel social unrest, especially where inequalities are highest? It might (hopefully not!) in a few months: “… pandemic events lead to significantly higher risk of civil disorder after 14 months”, with a peak around 24 months estimates an IMF paper by Saadi Sedik and Xu. Five years after the pandemic, civil disorder is 7% higher than the mean of the sampled 133 countries over 2001-2018. 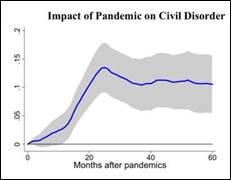 Let’s move to mobility! Do welfare benefits induce migration? In Denmark, Agersnap et al study how a 2002 law reducing benefits to non-natives by 50% led to a decline in migration flows by 5,000 people/year; the repeal of the policy in 2012 reversed the effect (the elasticity of migration with respect to benefits is about 1.3). 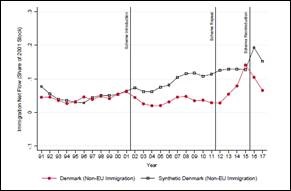 From migration to 3 great new papers on forced displacement: in Kenya, MacPherson and Sterck show that cash transfers combined with agricultural activities for refugees improve their diets, happiness and independence. This is mostly due to a switch from food aid to cash. However, the program had no effects on assets and employment. From a global perspective, Devictor et al show that refugees mostly move to lower-income countries, but now travel longer distances. And Verme and Schuettler find that across 19 displacement crisis, on average host communities benefit from inflows and negative effects tend to vanish over time. In a number of cases results are non-significant, such as for the majority of effects on employment and wages. Importantly, “… the probability of observing a decrease in household well-being among hosts is lower than 1 in 5”.

Human capital materials! In Canada (Manitoba), low income women get unconditional cash transfers ($80/month) at the 2nd and 3rd trimesters of pregnancy. Effects? An evaluation by Struck et al finds that the program led to less low birth weight, preterm births, and neonatal readmission within 28 days (and more vaccinations!) Chang et al estimate the effects of rainfall shocks on in-utero cognitive and non-cognitive skills in India: they find negative effects on receptive vocabulary at age 5, and on mathematics and non-cognitive skills at age 15. Turning to education, Evans blogs about needs versus merit-based scholarships.

But evidence is not always that positive for cash transfers: a paper by Kitaura and Miyazawa argues that when conditional, transfers improve short-term poverty, but increase inequality in the long run (by increasing the fertility rate of low-income groups). Bonus on CCTs: Bergstrom and Dodds discuss targeting, opportunity costs and elasticities of unconditional and conditional cash transfers in Mexico.

Plenty from the labor and skills corner with Michael Weber and Indhira Santos! Dayioglu-Tayfur et al find that in Turkey, increasing the minimum wage substantially reduces the employment of young males (probability declines by 2.5-3.1 percentage points at the 16-year-old age cut-off, while probability of unemployment increases approximately 2 percentage points). Anton et al explore the impact of robot adoption on several domains of non-monetary working conditions in Europe over the period 1995–2005: they find that automation has a negative impact on work intensity and no effects on skills and discretion. And Carrasco et al show that the “true” underlying wage growth in the Spanish economy during recessions was, on average, significantly lower that the observed with raw data.

Is the temporary Covid response a game changer for cash transfers? A thoughtful ILO brief by Bierbaum et al argues that crisis measures should be “… understood and utilized as building blocks for establishing rights-based national social protection floors, rather than remaining mere stopgap responses”. My blog echoes that the pandemic has the potential of moving the needle in social protection, but this would depend on if and how the new wave of programs helps unlock 6 pre-pandemic coverage bottlenecks, including mindsets, sectoral tradeoffs, institutions, delivery, financing and politics.

And do check out the latest RECOVR roundup, by Debenedetti et al, including featuring how, among others, Vanuatu’s blockchain technology for cash transfer is, according to Oxfam, 75% more cost-efficient than other forms of humanitarian cash assistance. And why not having extra bonuses on humanitarian assistance: Kelly’s latest monthly humanitarian evidence summary features 36 resources in a structured matrix is out, while the New Humanitarian has a great podcast (episode 4) on the future of aid. BTW, GiveDirectly is hiring a Research Manager and Research Director (h/t Cristina Sharpe).

Finally, the photo of current home deliveries of school meal provisions in the UK sparked waves of online criticism on the adequacy of provisions relative to cash transfers.