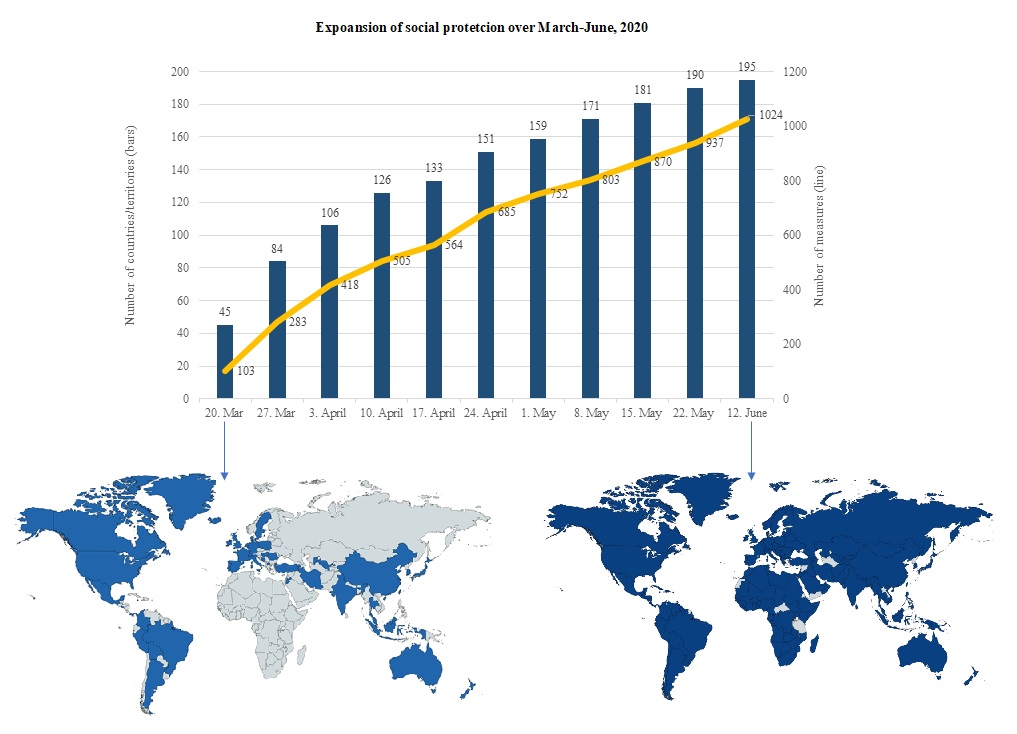 After nearly 3 months since version 1 of this paper was released, the number of countries and territories as well as social protection measures continue to climb. Since March 20, the number of countries quadrupled, while measures soared almost tenfold. Currently, 195 countries/territories have planned or introduced social protection measures in response to Covid-19. While this review’s version 11 will later provide a fresh look at which measures are planned, ongoing and ended, our repository of country actions now reached the four-digit milestone of 1024 measures.

Social assistance accounts for most of the social protection response. A total of 621 measures were recorded, accounting for 60% of the response. Nearly 50% of those safety net measures, and about 30% of global measures, are various forms of cash-based transfers. Besides 271 targeted cash transfer programs in 131 countries, interventions include 6 universal transfers, 5 of which one-off, and a robust number (25) of social pension schemes. In-kind transfers are also substantial, with 23% of the social assistance portfolio including the distribution of food commodities, vouchers and school feeding programs. Both in-kind transfers and cash have bene growing steadily over time. Finally, 14 public works programs are present in 11 countries.

Overall, social assistance continues to be adapted to the crisis in 3 ways. A total of 63 programs in 47 countries have adapted their administrative systems to make it easier for people to access programs, including advance payments waiving conditionalities, remote applications, etc. More generous transfers are provided for 75 programs in 54 countries, both in terms of higher transfer levels and extra payment cycles. Scale-up of program coverage is occurring in 167 countries and concerns 466 measures. Among them, existing programs are being scaled-up in 23 cases. A total of 179 cash transfer programs are new (58% of the total cash-based transfers), 75 of which are on-off measures (25% of the total).

The number of individuals that benefit from social assistance in various ways is staggering. Based on our analysis, 4 sets of numbers can be considered: if we consider the full set of ways in which programs are adapted (i.e., administration, adequacy and coverage), these have benefitted over 1.7 billion people (1,775,606,790). Using the same criteria, but restricting it only to cash-based measures, these have reached 1.2 billion individuals (1,297,710,250). If we examine the sole metric of coverage levels for cash transfers, then such scale-up covered 1.1 billion people (1,142,065,485). Such level would increase by about half a billion people if also in-kind transfers are included (1,672,407,675).

Cash transfer programs tend to be of short duration and relatively generous in size. Information on duration is available for 70 cash transfer measures ranging from 1 to 12 months, for an average of 3.1 months. In terms of generosity, data from 209 countries show that average transfers almost doubled (+93%). Increases more than doubled in five countries (Mongolia, Trinidad and Tobago, Egypt, South Korea and Brazil). Overall, transfers represent 30% of average monthly GDP per capita – a 5 points increase since last update in late May.

Where have cash transfers been scaled-up the most from their pre-Covid levels? Out of a sample of 18 countries, Myanmar and Nigeria present some stunning, four-digit rates because of their low initial levels of coverage. If we exclude those exceptional cases, the average rate of increase in cash transfers coverage is about 233%. Similarly, the Congo Republic and Madagascar have made remarkable scale-up efforts despite their very low initial coverage. Other countries like Indonesia and Bangladesh also present substantial scale up rates despite the relatively higher initial coverage levels. The coverage of cash and in-kind transfers varies by region. The coverage of cash transfers has increased over the past month, especially in East Asia and Pacific. On average, 15% of the world’s population is covered by cash transfers, ranging from 2% in Africa to 22% in North America and LAC. The global average increases to 22%, mostly because of large-scale in-kind schemes in India.

Importantly, how many of country measures are planned, ongoing or ended in practice? This is an important question to get a firmer sense of the action at country level. While reporting data is often limited, patchy and unavailable, we re-surveyed all the 621 social assistance measures with a view of understanding their ‘state in implementation’. Information was available for about 31% of the sample, or 195 measures. Out of these, 72% (141 measures) are ongoing, while the rest of the portfolio is either planned (13%) or completed (14%) at this time. A similar assessment is underway for social insurance and labor market programs.

Covid-19 has shed light on a range of vulnerabilities, including in urban areas. For this purpose, we re-examined the dataset to identify the number of programs that have been designed to address the particular needs emerging in urban settings. A total of 21 programs have such urban lens, with 1 (Kenya) specifically designed for slums. While the latter is a public works scheme, most programs (14) are cash or in-kind transfers, followed by public works (2), school feeding (2) and utility support (2).

There are important developments also in other key social protection components. For instance, 263 social insurance programs are present in 125 countries. Most programs include unemployment benefits (79 measures), followed by wavers, deferment or subsidization of social security contributions (61). Also paid sick leave is a significant intervention adopted for Covid-19 (59), and so are ways in which pensions were adapted (49). Supply-side, worker-related labor market programs are now featured in 140 programs and 85 countries. As in previous editions of this review, wage subsidies are the premier vehicle utilized for Covid response on the labor front. These now include 78 measures in 67 countries. Other measures include labor market regulation adjustments (27 cases), 23 activation initiatives, and shorter-time arrangements (12).

Regions present different combinations of social protection components. Sub-Saharan Africa is the region with the highest share of social assistance (83%), followed by South Asia (76%) and Latin America and the Caribbean (71%). Only in Europe and Central Asia safety net transfers are less than half of the regional portfolio. Social insurance is particularly extensive in North America (44%), while East Asia present the largest share of labor market measures (20%). The latter as just 5% in Sub-Saharan Africa and South Asia.

What about countries in conflict and fragile situations? New analysis for those countries shows 57 social assistance measures, complemented by 9 and 4 social insurance and labor market programs, respectively. Many of the most fragile countries globally have no measures put in place – including Central African Republic, Syria, Yemen, Burundi, and Eritrea, among others.

How much are countries spending on social protection responses? For a subset of countries for which data is available (64 in the case of social assistance, 20 for insurance, and 17 for labor markets), a total of $589 billion is being reported. This represents an increase of $48 billion since the last update in late May. This is about 0.4% of GDP, if we consider $142 trillion as the world’s GDP. Such level of investment is in line with overall social protection spending that occurred as part of the global response to the 2010 financial crisis. However, per capita spending is variable: this ranges from $123 in high-income countries to a mere $1 in low-income settings; similarly, South Asia only provides $3/capita.

The paper is available for download SP COVID responses_June 12.