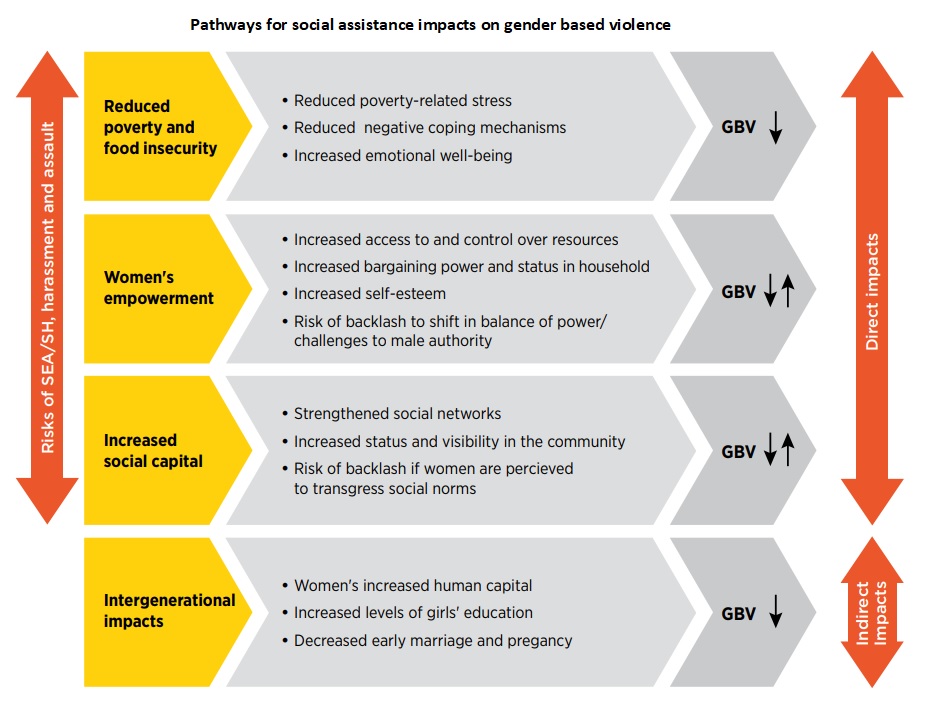 Some much evidence on cash transfers out there… but what about operational guidance? Botea et al offer an illuminating example of how to understand the role of social assistance in preventing gender-based violence, and do so in a way that is empirically rigorous and operationally relevant. After a rapid review of concepts and evidence, the report disaggregates the discussion on core social protection delivery functions. This includes listing key gender-sensitive questions at the end of each “delivery block” and complementing it with boxes and tips, e.g., see “design and implementation tips” for assessing needs and conditions (p.35); or the various “good practice” boxes on devising communication strategies (box 4/p.28), labeling (box 5/p.29), and box 7 (p.38) synthesizing evidence on recipient’s gender (“… despite the link between women’s earned income and outcomes among children, there are no systematic differences between men and women recipient”). Check out also the beautiful diagram on the latter on p.39, and a similar one for payment modalities on p.47. A true goldmine!

Speaking of gender, have social protection responses to Covid-19 undermined or supported gender equality? The question is tackled by Holmes and Hunt as part of 4-paper collection of structured notes produced by ODI et al on the pandemic. Their case study of South Africa’s Caregivers Allowance (a Child Support Grant top-up) showed that it rapidly reached 7 million recipients (mostly women); yet the level, adequacy and duration of the top-up has not been sufficient to meet gendered needs. In contrast to India, the paper notes, “… the Kerala case study illustrates an example of a relatively comprehensive approach to the pandemic response”. Also, the advantages of digital payments were particularly evident in South Africa, while the Kerala example highlights the importance of utilizing gender-disaggregated and community data to inform gender-responsive design.

Other two resources on gender! In Tanzania, Gichane et al show that cash transfers can reduce “… young women’s transactional relationships motivated by economic vulnerability”; yet in Peru, Velasco et al find no effects of cash on contraceptive use.

Back to the ODI et al compilation, what do the other papers cover? Roelen et al assess the performance of cash transfers in urban areas, particularly in Madagascar, Peru, and Nigeria. Their findings offer, as they put it, “tentative optimism” within considerable variation in performance: some programs “… began making payments within a day [from curfew], other programmes had yet to make payments when interviews were conducted in November 2020. (…) Coverage often increased in a more ad hoc manner as the crisis continued, frequently driven by political economy considerations. (…) Transfer values often (…) did not account for differential household needs or urban-specific costs of living. (…) [And] poor data quality also meant that complementary strategies [to social registries] were needed to reach those missed or misrepresented in initial datasets”. (BTW, I liked a lot the examples in the boxes, e.g., box 4/p.15 on the use of new technologies in Malawi’s CUCI scheme, and box 5/p.25 on urban social assistance in fragile contexts like South Sudan).

The third paper, coauthored by Hagen-Zanker and Both reviews the evidence on including refugees in government-led social protection responses in the Congo Lisungi project, Ingreso Solidario in Colombia, the NAF in Jordan, and the UNHCR-implemented cash transfer in Pakistan. What did they find? Also here a mixed picture: in Pakistan and Congo, the majority of refugees received payments more than 6 months after the first lockdown (the absence of existing registries was a key bottleneck), while in Colombia and Jordan timelines were shorter (in the case of NAF also because of joint humanitarian-development tools). Coverage was relatively low (in Congo 1.9% of refugees accessed the program, while in Colombia 3% of displaced Venezuelans were covered), while in all four country case studies benefit amounts were the same for citizens and refugees. Bonus: according to Beaman et al, by mid-2018 less than 2% of the 5.6 million Syrian refugees returned home voluntarily.

A couple of papers on cash transfers and health! Sun et al have a rapid review of the evidence and show that while cash transfers “… have a positive relationship with health outcomes (…), a lack of benchmarks and comparisons limits our understanding of whether [they] are cost-effective”. And how to maximize surgery utilization in hospitals among potential low income users? Design cash transfer incentives that offset people’s opportunity and transaction costs, as advocated by Strader et al with their experiment in Guinea.

Not on health, but still on human capital: SIEF released an Evidence File on parenting programs presenting evidence from 10 evaluations, 6 of which operated by governments (see p.4)… and it is beautifully designed, including a landscape format and crisp visuals (h/t David McKenzie and Mohamed Almenfi).

Why not discussing financing issues? Longhurst et al lay out financing options for shock responsive social protection, including “money-in” and “money-out” instruments, as well as ex-ante (e.g., triggered contingent finance, parametric risk transfer instruments, cat bonds, etc.) and ex-post options. And BTW, a juicy brief by Zimmer et al estimates that fossil fuel subsidies account for 0.5% of global GDP ($468B), a level that outpaces spending for renewable energy in most countries. Oh, before we move on… Alberini and Umapathi discuss the welfare impacts of Ukraine’s 2015 tariff increase of natural gas (an increase by 700%!) and potential redesign of the program.

Moving to particular design issues, Gray et al have a very important paper showing that work requirements in US SNAP vouchers don’t lead to work: they actually reduce program participation by 53% (especially among homeless), but with no effects on employment. Bottom line: “… eliminating work requirements would likely transfer more resources to low-income adults”.

And if interested in more news on a program without such requirements, check out Maag’s recent testimony before DC’s government on “Using Basic Income to Meet the Needs of DC Communities”.

Time for labor and skills (h/t Michael Weber)! Kim et al found that payroll tax cut in Singapore has a large effect on wages without changes in employment. Filomena and Picchio show that among findings from 64 articles, 32% support the hypothesis that temporary contracts are a port of entry into stable employment positions, 23% report ambiguous or mixed findings, and the remaining 45% provide evidence in favor of the dead end hypothesis. In Austria, Boheim and Christl found a substantial increase of mismatch unemployment for manual routine tasks as well as for the region of Vienna. And Poutvaara argues that international migration flows largely reflect demographic patterns and economic opportunities.

And to conclude… Lokshin and Umapathi have a blog on “bureaucratic solutions to targeting problems in social assistance”; Ravallion reviews ways to address low response rates among rich households in household surveys; Ang documents how China aligned bureaucrats’ financial incentives with long-term economic development objectives; and a media piece narrates the challenge of growing old without social protection or a pension in Lebanon (h/t Florian Juergens).