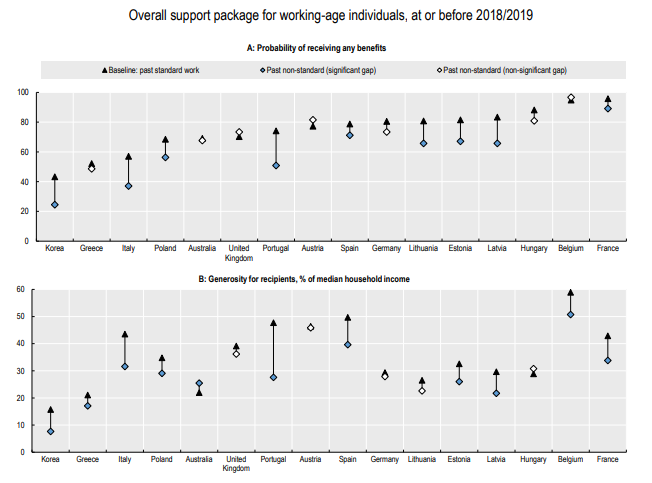 What can a granular analysis of “non-standard” workers tell us? A new paper by Immervoll et al shows that in pre-Covid times, in most OECD countries workers in “standard” employment have a 70-80% chance of accessing social protection. The paper then unpacks the analysis for the self-employed (p.27), part-time dependent employed (p.29), and unstable dependent employed (p.30). And here comes the news: for half of the sample of 16 countries (i.e., Australia, Austria, Belgium, Germany, France, Hungary, Spain, and UK), the authors found that, contrary to conventional wisdom, there is only a limited gap between coverage provisions accorded to standard versus non-standard workers. Conversely, differences were more pronounced in other countries, including non-standard workers being 50-60% less likely to be covered during periods of unemployment than standard workers (e.g., Korea, Poland, Portugal, Spain, Italy, Latvia, Lithuania, and Estonia). A similar picture emerges for differences in benefit adequacy, with France and Belgium also displaying significant differentiated provisions.

From Costa Rica to the whole region: an IDB report by Aranco et al investigates how pensions, healthcare, and long-term care programs support the elderly in Latin America and the Caribbean. Among the findings, they show that some pensions have “serious flaws”, “lack coverage or adequate benefits”, and with design that “funnels pension spending to small subpopulations”. As part of the rich analysis, see for example the nice discussion on replacement rates in box 3.3, p.51, with such rates being 5 times lower for social pensions — 11% of average wages for social pensions (figure 3.6, p.53) vs 56% for contributory schemes (figure 3.5, p.52) (h/t Mohamed Almenfi).

Let’s move global: an IMF note by Amaglobeli et al lays out a number of interesting factoids on mitigating the effects of high energy and food prices: food expenditures absorb up to 44% of consumption by an average household in a low-income country (compared to 16% in high income countries), hence making them particularly vulnerable (figure 3, p.3); and the pass-through from international to retail prices for fuel has been relatively limited in most countries, mostly because of the mediating effects of price subsidies in the Middle East and Africa (figure 5, p.4). Among the recommendations, the note calls for “… targeted and temporary cash transfers to mitigate the impact on low-income and vulnerable groups”; and “… countries with existing energy or food subsidies should gradually pass through international prices to retail prices while committing to eliminate subsidies over the medium term”.

More on emergencies: a facilitated online discussion is ongoing on targeting in crisis contexts, with PMT being among the most widely discussed, and criticized, items (e.g., see this morning’s entries).

Social protection from a fresh perspective: Bladon et al have a great framework for between connecting social protection and fisheries management – see p.9 for conceptual linkages, and p.13 for practical connections, with a range of institutional and program-level considerations completing the note (check out see also a handy infographic and blog by Bladon and Okamura).

News on gender? The Act Church of Sweden and the Kvinna till Kvinna Foundation have a policy brief on social protection and gender equality. The note argues that “… [t]here has been a strong perception that women tend to spend money more wisely than men. However, studies have not shown that this is the case. (…) It is generally good practice to channel income support directly to women and doing so not because they spend the money better, but rather as it can be an important – but not the only – way to increase equality between men and women” (p.6) (h/t Gunnel Nycander).

Finally, Dercon distills a key message from his book and conveys a praise of African technocrats, and a fascinating initiative brings together chief economists from across the continent.