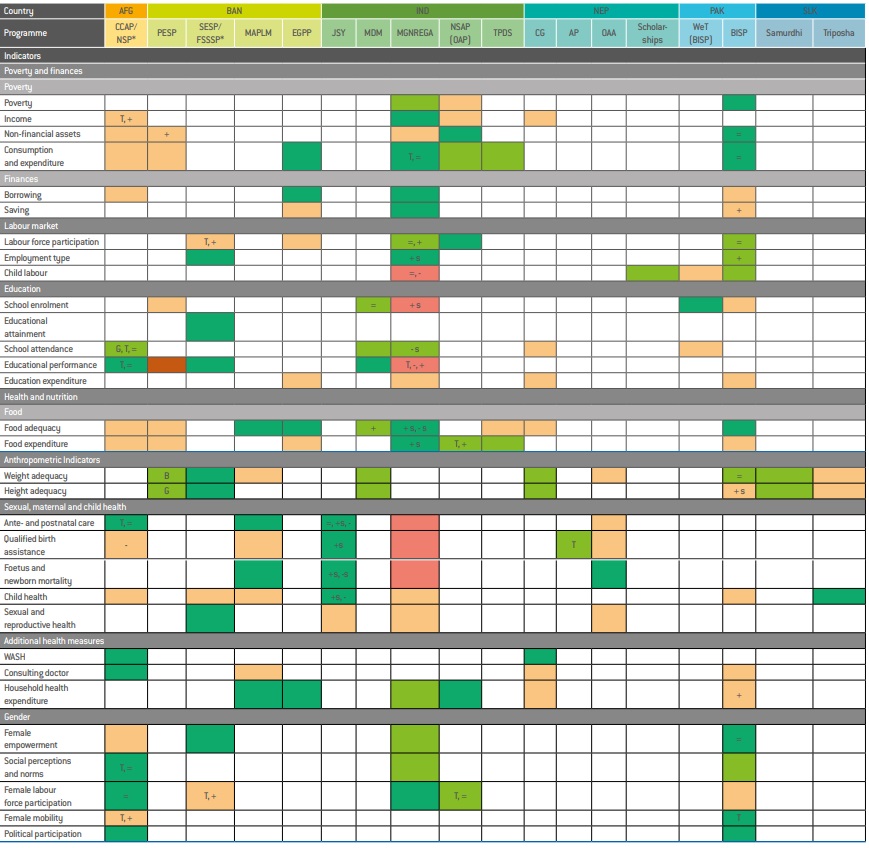 Let’s start with two awesome resources synthesizing evidence on social protection! The first review by Markhof et al examines the socio-economic impacts of social assistance in South Asia (h/t Pedro Arruda). The report masterfully presents complex data in a very user-friendly way while not losing quality, including for 18 programs and 31 indicators (see grid above, with colors coded by significance and desirability of impacts). The other synthesis is offered by UNICEF and reviews the effects of social protection and gender more globally (h/t Tomoo Okubo). The paper nicely organizes the evidence around education and learning; health and nutrition; child protection and gender-based violence; and economic empowerment. I particularly enjoyed the discussion in section 7 disaggregating design choices that affect outcomes (p.32-35) as well as Annex (p.43-50) reporting summary evidence by interventions, age, and dimension.

That’s not only on gender… new evidence examines how gender affects intrahousehold allocation of cash! A brief by J-PAL shows that mothers participating in North Macedonia’s secondary education CCT triggered changes in food expenditures: a percentage point increase in a mother’s contribution to household income via CCTs leads to a 0.24 pp increase in the share of household income spent on food. Notably, 7% of women beneficiaries were willing to sacrifice almost the full cash amount to avoid their husband becoming the recipient. Gender bonus: a super useful excel spreadsheet covers over 300 papers analyzing gender violence published since April 2020 (h/t Amber Peterman).

And now a CCT… for teachers! A pilot in Sierra Leone provided financial incentives to teachers for participating in communities of practice (CoP) with other teachers. A synthesis of findings by a WBG brief shows that while some positive effects were detected on use of books in classrooms, incentives were generally too small and too complex to boost CoP attendance, teacher knowledge, or student learning (h/t Mohamed Almenfi). Bonus on education: a pilot program in Guatemala evaluated by Haimovich et al reduced dropout rates in the transition from primary to lower secondary school between 4-9%, and did so at a cost of only $3/student. How did they do it? By using early warning systems that accurately identify students at risk of dropout and support them with targeted interventions.

Not just in rural areas anymore! A PEI report by Avalos et al examines key issues in urban economic inclusion programs (i.e., integrated programs bundling cash and other productivity interventions for vulnerable populations). The analysis shows that over half of active 219 programs now reach urban or peri-urban areas. Empirical evidence is limited but promising: for example, an urban program in Côte d’Ivoire combining public works and entrepreneurship/job search training increased earnings by 11.6%; and in Colombia, providing conditional cash transfers (CCTs) with entrepreneurship support increased participants’ income between 15-49%. And the program-level costing structures and interventions stocktaking in the Appendixes are two gems!

Back to regular cash transfers: Garmen et al investigate whether the Child Support Grant in South Africa is improving youth mental health. Results are more sobering than expected: “… CSG receipt did not improve the psychological wellbeing of adolescents and young adults, nor did it improve their education or employment outcomes”. Maybe poverty is not “just lack of cash”?

Since I mentioned food assistance… Coleman-Jensen and Rabbitt document that almost 7% of the US population, or over 20M people, used food pantries in 2020 – and over 1/3 of food insecure families did so.

Climate change seen from two increasingly complementary perspectives: a paper by Rigolini outlines the contribution of social protection in enhancing adaptation, decarbonization (just transition) and mitigation, while de Geoffroy et al lay out 40 lessons on how humanitarian assistance is supporting the climate agenda (lesson 34 is on social protection partnerships during extreme climatic events).

Double bonus on humanitarian assistance: CaLP compiled 150+ resources on social protection-humanitarian linkages; and in the first of his five-part series on locally led humanitarian action, Baguios asks if localization “goes far enough in supporting the agency of local people”. Before you go: a WBG report shows that the localization of development assistance is more advanced than its humanitarian arm, including with recipient governments being the dominant channel of implementation (43% of commitments).

Before moving on from the climate agenda… check out this killer graph on carbon emission inequality by IEEP and Oxfam: the richest 1% of the world population (about 80 million people) will have emissions footprints that are 30 times higher than the global 1.5⁰C-compatible per capita level, while the poorest half of the globe (nearly 4 billion people) is set to remain substantially below that threshold (h/t Max Lawson).

Innovations in cash transfer payments! In Egypt, a handy WBG brief shows that during the pandemic the share of electronically delivered social assistance payments accessed through ATMs increased from 31% to 60%. In Latin America Albuqerque et al estimate that adopting a treasury single account (TSA) and digitizing revenue collection and payments could generate potential annual savings of$1.1 billion (approximately 0.15% of total tax revenues). And in Kenya, a study by Parlasca et al finds that while more than 80% of farmers use mobile money, only 15% use them for agriculture-related payments.

A paper on a very big development question: Di Maro et al evaluated a project in Tanzania designed to incentivize investments in local state capacity by offering grants conditional on institutional performance scores. Bottom line: conditions in treated areas improved, but so did those of other areas… in other words, “the project’s value-added is estimated to be zero” (it reminds me a bit of the Millennium Villages evaluation debate?).

On the future of growth! Bird et al argued that in Rwanda, poverty reduction would require “… fueling job-rich ‘growth from below’ by generating additional demand in the rural economy, continuing to boost agricultural productivity and including even the poorest peasant farmers”. A bit reminiscent of Rodrik’s point of generating growth from the constellation of small and labor-intensive informal firms.

To conclude: there are three job openings at GiveDirectly, namely Country Director for the Democratic Republic of the Congo; Technical Program Manager; and Senior Technical Program Manager (h/t Cristina Sharpe). And a news piece discusses the delicate issue of the use of poverty imagery and stereotypes to raise money from donors (h/t Martin Ravallion).