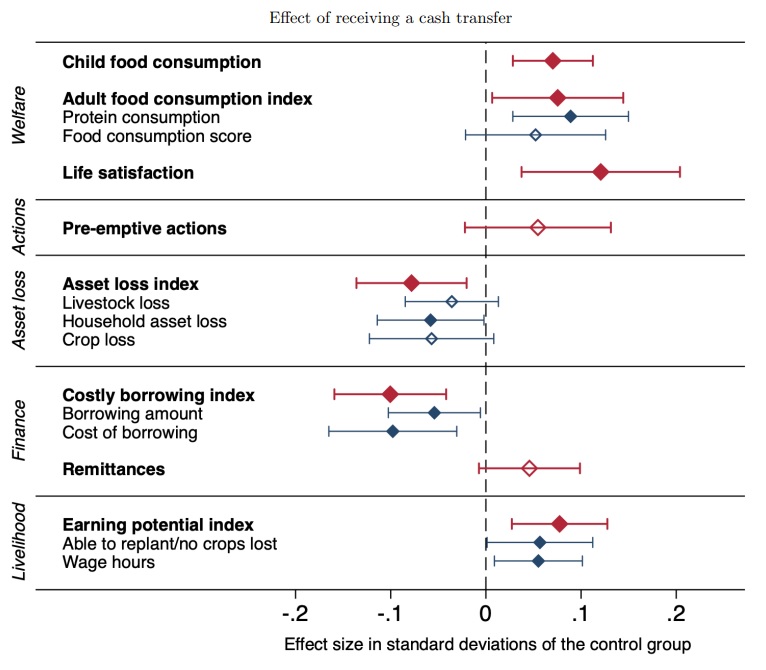 Let’s repeat it together: the best response is prevention! New paper by Pople et al examines the impact of a one-off “anticipatory” cash transfer to around 23,000 households in Bangladesh. Specifically, the intervention provided $53 via mobile money just before people experienced severe flooding, not after the shock. As shown in the above figure, people receiving such early assistance had better food consumption, engaged in less costly borrowing after the flood, and reported higher earnings potential than the control group. And timing matters: the average effect of cash dissipates entirely if the cash transfer is not received within 12 days of the local flood peak.

Let’s stay in South Asia: while intended to be consumed, in-kind benefits (like food, services and even jobs) may be traded by recipients. However, personal gains from such trade are largely unknown: Ravallion’s new paper on India’s NREGA illuminates those benefits and argues that, among other positive effects, allowing public works jobs to be tradeable reduces poverty more than (budget-neutral) cash transfers.

Moving to Africa, a new article by Grimm et al shows that in Burkina Faso informal transfers play a major role, and warn that “… the introduction of formal social protection would probably come with a disproportional crowding out of private transfers”. This may substantiate some lingering concerns around cash potentially displacing family or community-based support.

Globally, there is a debate that may be with us for some time, i.e., whether a cash transfer conditioned on vaccination would prop up vaccination rates. For once, Serbia already embraced such approach.

In the meanwhile, on the other side of the Atlantic there is an explosion of US initiatives around universal basic income (UBI) and guaranteed minimum income (GMI): first, let’s be clear about the differences, so this UBI vs GMI piece by Pinon comes handy; following Stockton’s success, 42 mayors signed up for Gibbs’ organization, Mayors for Guaranteed Income; Jack Dorsey announced Start Small LLC as part of UBI trials; a thought-provoking piece by Guo argues that Covid killed UBI and boosted GMI; a UBI pilot bill has been introduced in the state of New York ($600/month to 10,000 resident for 2 years); and New York University launched a Cash Transfer Lab.

Bonus on the US: what does it mean to be living in poverty? It could mean less green and more heat: McDonald et al examine over 5,700 urban municipalities and show that low-income blocks that have 15.2% less tree cover (or 62 million fewer trees) and are 1.5⁰C hotter than high-income blocks. Bonus on temperature: Fiorella et al examine the interplay between climate and fishery workers in Cambodia.

Since I mentioned workers… time for labor and skills resources (h/t Michael Weber)! What happened when Germany expanded tax benefits for low-earning workers (i.e., the 2003 reform)? Galassi shows that firms with higher shares of low-earning workers increased their employees relative to those with lower proportions of such workers; Mare and Hyslop find that in New Zealand there is no clear evidence that increases in the minimum wage have led to adverse employment effects; Card and Cardoso show that in Portugal, wages exhibit a “spike” at the wage floor, while a typical worker receives a 20% premium over the floor; Gustafsson et al document that seniors in urban Russia are more likely to work for earnings than their peers in China; and Favara et al have a fascinating paper exploring how education choices are made based on expected returns to schooling in Ethiopia, Peru, India, and Vietnam.

Any news from linking humanitarian assistance and social protection? A nice round-up of resources on the theme from the 45th edition of the GB newsletter; the paper by Ghorpade and Ammar on the topic in Yemen is now available in Arabic; and CaLP colleagues are developing a toolbox on linking humanitarian assistance and social protection – see the toolbox summary and feel free to send resources to Gaby Smith ([email protected]) and Julie Lawson-McDowall ([email protected]) (deadline is May 31st).

And to conclude, lots of events! There are two seminars on social protection and digital technology – one by the OECD next week (May 12) and another hosted by EPRI held this week (May 5); and enjoy three exciting videos from the recent “PEI Global Learning Event”, including the opening session Economic Inclusion for the Poorest – Moving to Scale, Women’s Economic Empowerment, and Great Expectations and Debates: The Evidence Base for Economic Inclusion (h/t Colin Andrews).