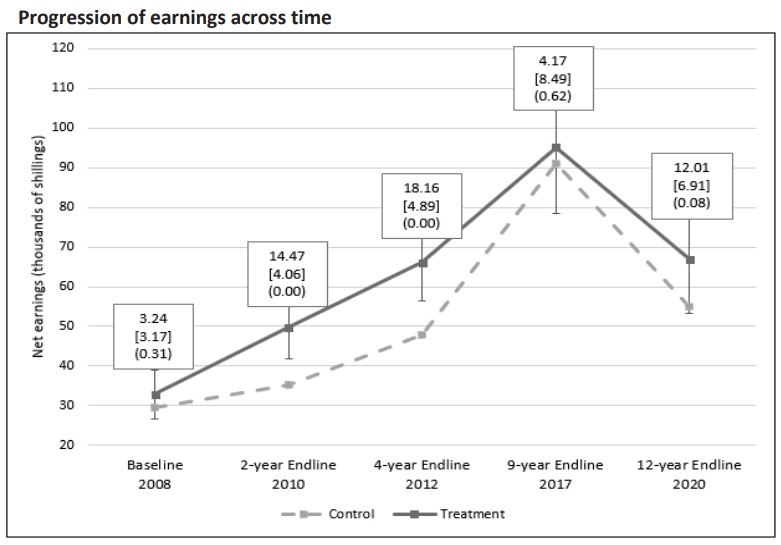 Do the effects of cash transfers persist over time? Let me share two papers offering differing answers in different settings. Starting on a bright note, new evidence from Uganda by Fiala et al extended previous experimental research on the YOP scheme – a one-off grant introduced in 2008 and providing 265 groups of young adults (16-35 year-olds) with $382/capita. Their new paper tracks YOP’s effects 12 years after the grant distribution, namely in the midst of the pandemic in September 2020 (they were able to reach about 1,656 individuals via phone and in-person contacting, a response rate of about 83%). What did they find? The treatment group reported 20% higher income (mostly driven by men), with beneficiaries also experiencing a less severe Covid income shock. But both treatment and control groups are equally likely to be employed, with also food security levels being similar (h/t Julian Koschorke).

In a different context, namely among Syrian refugees in Lebanon, the impacts of cash-based transfers dissipated right after distribution: I mentioned “cash-based” since an article by Altindag and O’Connell examines the effects of a value-based, food e-voucher scheme for 120,000 households (about $1,620/year for a household of five) alongside the impacts of a cash transfer for a subset of 55,000 households (equal to nearly $2,100). Among the results, cash reduced child hardship (child labor, school disenrollment, and child marriage) by 0.19 standard deviations – albeit mostly concentrated among boys – while the voucher lessened the incidence of food coping strategies by 0.28SD. Both reduced livelihoods coping strategies between 0.12-0.14SD. However, these improvements vanished just 6 months after the schemes ended: “… these challenges to sustained self-reliance are unlikely caused primarily by program design, but are rather a result of the limited capacity of refugees to save and claim the returns of investments”.

From field experiments to a thought experiment: what would happen if development and humanitarian assistance (about $180 billion) would simply be redistributed as cash transfers? Such radical idea is the subject of a new paper by Ulrich et al which imagines the provision of $750-$1,500 to 120 million poor households globally (700 million individuals). Among other considerations, the paper infers that the cash influx would push the tax agenda forward: “[w]ere a significant part of ODA to be allocated gradually to the scaling of cash transfers, over time there would be less ODA available for government programs and/or budgets (…). This would create a gap in government finances and put pressure on governments to step in to maintain service provision and population satisfaction at the same levels. (…) [T]he projected gap in government finance is likely to close partially through increased taxation [since cash would] create multiplier effects and increase local demand and consumption” (p.11).

Back to Covid-19: a paper by Ohrnberger estimated the mitigating effects of cash transfers in countering part of the pandemic’s negative health impacts – he shows that health among the poorest beneficiaries (lowest wealth quartile) was reduced 0.25 SD compared to 0.4 SD for non-recipients.

What about the region more widely? SASPEN has a report led by Dafuleya and Wakunuma reviewing the social protection experience of 10 Southern African countries during Covid-19. The paper argues that countries’ systems were “ill-prepared to respond to shocks of the magnitude of the COVID-19” (p.33), and that “nearly all the countries showed significant gaps” in the sector (p.34). Yet “… for the first me most of the active population in the informal sector was reached with cash transfers” (p.6). The analysis points to the “… need to have national social registries, transition from delivering food to cash transfers during pandemics” and to “consistent messaging to champion four fundamental messages: financing, coverage, adequacy and the development of shock responsive systems”.

Let’s talk climate and resilience: in Indonesia, Fitrinitia and Matsuyuki explored the relationship between the PKH conditional cash transfer scheme and flood risk management, including ex-ante and ex-post shocks. Their findings (see figure 5) indicate that PKH “… generates a double impact on both financial and social capital. Effect on financial capital is a consequence of cash delivery. Whereas effect on social capital is expected from routine mentoring and workshops delivered during the family development sessions provided as companion programs of the cash transfer”. Bonus: Karacsony has a blog on the environmental, climatic and jobs related effects of social protection in Fiji. Double bonus: Jilani lays out the case for strengthening social protection in the region to prepare for the impacts of climate change.

And what about MENA? Hammad and Mohamed have a valuable mapping of Libya’s social protection system. The analysis is disaggregated by typical component (assistance, insurance, labor markets, and services), e.g., see table 5 (p.22-26) providing an overview of 23 social assistance programs’ target groups, coverage, adequacy, among others. Data is patchy, but in addition to universal food and energy subsidies, the largest-scale safety net program is the unconditional “Wives and Children’s Grant” covering almost 1.1 million households, followed by social pensions (about 231,000 households). What are the national priorities moving forward? According to stakeholders, these relate to administration or delivery issues, followed by governance and design (see table 17, p.51). Check out also Tables 8.1 and 8.2 in the Annex (p.54-61) offering a handy list of main roles of national and international actors by social protection component (h/t Mohamed Almenfi).

Two resources on basic income in high income countries! A macro-level report by Thoung examines a small UBI for the UK: the analysis shows that the scheme can be progressive, leading to higher spending by the poorest households. Modeling work (E3M3) shows that this in turn increases GDP and employment even if basic income may weaken incentives to work. The report concludes with considerations on funding basic income by debt-free sovereign money. Another paper by Chrisp et al assesses the extent to which technological change is responsible for a decline in the labor share in the OECD, and discusses the likely effects, and political feasibility, of a UBI (h/t Geoff Crocker).

From universality to targeting: a podcast by socialprotection.org featured Sabates-Wheeler and Wai-Poi discussing the thorny issue of targeting in social assistance. Among the interesting remarks, Sabates-Wheeler stressed that “we don’t take a universal approach seriously, we talk about it… but don’t build it into our budgets” (at about min 18:30); and Wai-Poi underscored that “targeting is often criticized for the high costs… but the administrative costs of social registries is an average of 1 to 3% of the annual benefits paid out every year” (~min 22:30).

Final fireworks: the multiplier effect is one of the aspects of cash transfers that Rory Stewart, from this week at the helm of GiveDirectly, has stressed in various interviews: “… if you show that [$1 worth of cash] delivers $2.40, it starts to feel less like giving a fish and more like giving a… magic fish”, he said in a conversation on Vox with Matthews (see also more news coverage on his recent appointment). Plenty of killer-facts in a paper by Lo Bue et al on “gender and vulnerable employment” in low- and middle-income countries, e.g., see figure 6 for striking gender gaps associated with marriage, parenthood, entrepreneurship, and assets indicators, as well as figure A.3 on mobility, workplace, pay, and pensions (h/t Amber Peterman). Privacy International has a note on privacy tradeoffs, WBG and social protection during crises (h/t Melis Guven). And the multi-agency SPIAC-B platform released a statement on social protection responses to food price shocks.