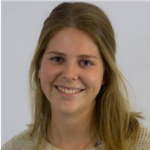 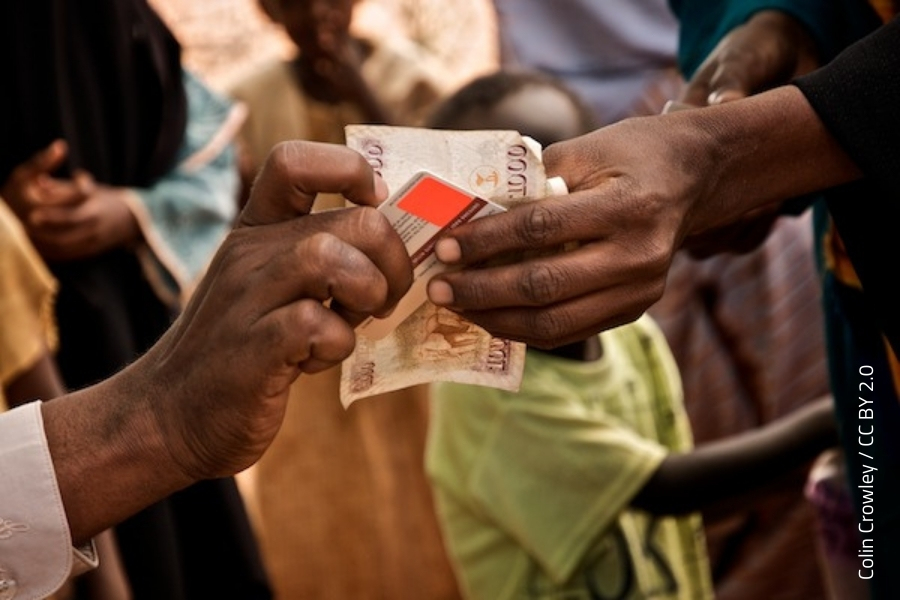 This blog summarises the exchanges and important messages raised by the expert panel at the webinar “Towards shock responsive social protection: lessons from the COVID-19 response in six countries”, held on 24 June 2021 and organised by Oxford Policy Management (OPM).

This webinar presented the main findings from research under the Maintains programme, implemented by OPM, and facilitated a discussion between Maintains researchers, FCDO (Kenya), and SPACE to situate the findings within the broader context within study countries (Bangladesh, Ethiopia, Kenya, Sierra Leone, Pakistan, and Uganda) and the global literature on shock-responsiveness from before COVID-19 and lessons from social protection responses to COVID-19 in other countries. The purpose of the discussion was to highlight and discuss some of the less explored findings from the synthesis report and what this might mean for preparing for future shocks, including those that are less predictable, in the future.

You can access the webinar recording and presentation slides online.

Jana Bischler started the session by presenting an overview of the research including the purpose of, and approach to the study. Jana also described the conceptual framework (see Figure 1) which was developed as part of the study and focused on types of response; policies, design features and operational procedures underpinning the response; and outcomes of the response. The main objective of the framework was to guide data collection and analysis for the cross-country study of the social protection response to COVID-19 and provide a basis for assessing the responses in the six countries. 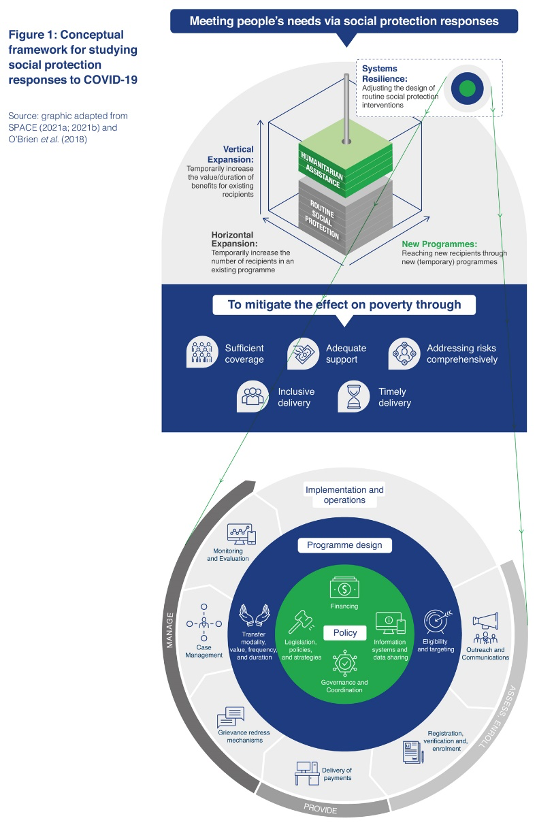 How did the social protection systems respond to the pandemic?

To reach new individuals/households, most countries opted to implement new, time-bound programmes that targeted groups of people not targeted by routine social assistance programmes, rather than horizontally expanding existing programmes, in line with global trends. There were several reasons for this, including perceptions around the capacity to handle an increased caseload, lack of an ongoing routine programme to expand, and concerns that it would be politically difficult to communicate to new recipients that support would only be temporarily provided through a routine programme.

Finally, almost all countries also implemented vertical expansions to temporarily increase support to existing programme recipients in light of greater needs for one to six months.

How effective were these responses in mitigating the impact of the pandemic?

Jana then presented an assessment of the social protection responses across the six countries: 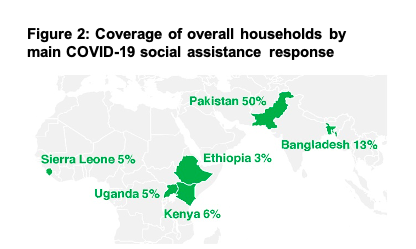 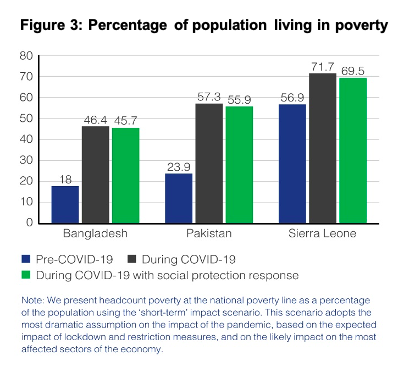 What enabled or constrained an effective response?

Alexandra Doyle provided an overview of the key enablers (following the conceptual framework) and preparedness actions for an effective response, which can be found in the Research Summary.

The capacity to quickly mobilise domestic resources, create new financing sources, and leverage pre-existing external financial mechanisms was important. However, there is a risk that reallocating funds earmarked for future routine social protection could have adverse effects on future routine programming if funds are not compensated. Therefore, planning for shock response should be developed on the basis of pre-agreed financial commitments, combining different financing strategies and instruments, triggers for activation, and a contingency plan to guide disbursement.

The lack of policy frameworks for sector-wide shock-responsive social protection was found to be one of the main constraining factors. Further, one of the surprising findings of the research was that Ethiopia, Kenya, and Uganda, countries that are often regarded as adopting best practice for shock preparedness (i.e. having scalability frameworks in place), were disappointing. Investments in scalability frameworks, and the financial commitments behind these, were mostly designed at the programme level and to respond to specific, recurrent shocks (i.e. droughts). However, COVID-19 has demonstrated that highly severe and widespread shocks may require a more flexible approach; that is, a system—not just a single programme—with features that allow flexing to respond to unforeseen circumstances.

Reflecting on this finding as part of the discussion session, Anthony noted that there needs to be a balance in terms of investment in programme- and system-level flexibility. Programme-level scalability frameworks have been useful in the past to manage climatic shocks and it has been right to invest here given the contribution of drought to economic losses, particularly in Africa. But, COVID-19 has exposed what can be managed with these types of frameworks and investments could be made to improve the flexibility of these scalability frameworks to respond to novel shocks. For example, triggers could be defined in relation to other shocks. This requires investing in the production of, and access to data that can be used to identify the occurrence of other shocks. Valentina added that we can think about two types of shocks, with the first being recurrent and predictable. The intrinsic role of social protection systems is to respond to these shocks without the system being overwhelmed. The second type of shocks are one off, overwhelm national systems and require a very different type of response than may the case for predictable shocks.

Governance mechanisms and strong leadership were key enablers of large-scale and timely responses. However, mandates for leading responses to shocks, and social protection ministries’ roles within these structures, are often ill-defined, which can obstruct well-coordinated responses. Similarly, a lack of governance mechanisms resulted in a proliferation of coordination bodies and working groups, contributing to piecemeal responses. Going forward, coordination mechanisms need to be strengthened to enhance coordination within the social sector; between social protection, DRM, and other sectors; among different administrative levels; and between governments and development partners, humanitarian agencies, and civil society.

Valentina noted that social registries were used extensively in about 80 countries in the COVID-19 response due to the high proportion of the population affected and the high overlap between affected populations and registry data. There was also high pressure to respond quickly and registries allowed countries to implement a first layer of response quickly (later to be built on, as was the case in Pakistan). There was also a higher appetite for no-regrets and less refined responses in the beginning of the pandemic. Social registries that were ‘good enough’ were often used in the response. In general, however, it’s important to consider the entire data ecosystem in a country and how this ecosystem can be strengthened for future shocks. Any response relying on outdated data, without the opportunity to be complemented or updated, will result in exclusion. In many countries, alternative data sources were used e.g. combining tax data, mobile phone data, voter registration data and then using a ‘targeting out’ approach. These approaches came with trade-offs to achieve speed and coverage but, this points to the need to balance the trend towards greater interoperability with data protection and security and explicit consideration for who is excluded. The efficiency gains of these types of approaches can be re-invested in reaching the most vulnerable populations.

Madhumitha cautioned that as the memory of COVID-19 is recent, there may be a lot of enthusiasm to invest in social registries. But, countries need to have sufficient capacity and financial resources to ensure that data systems meet the six data quality parameters outlined by Barca and Beazley (2019). We should remember that the structural barriers to maintaining a social registry have not changed.

The response programmes were designed in contexts of uncertainty and were typically not informed by evidence or reliable estimates of population needs. Given the widespread effects of the crisis and the speed at which it escalated, governments reacted based on the information available at the time. This meant there was not always a precise understanding of how and to what extent certain populations had been affected. As part of a broader shock-responsive framework, guidelines for programme design should be developed, which outline design principles, key definitions, and agreements in place to facilitate response.

In terms of implementation, Alexandra noted that innovative approaches to registration enabled responses that were wide-reaching and facilitated timely implementation, while traditional approaches to registration took longer to implement. In addition, demand driven mechanisms to identify recipients were key in the case of Pakistan, which has been the case in other countries too. This can have important implications for the future of social assistance programmes, which are usually tied to annual budgets and rigid supply-driven approaches: truly responsive systems may benefit from demand-driven approaches combined with protocols for verification to strengthen accountability.

Overall, the study found that technology can improve service delivery, especially in terms of its timeliness, cost, and transparency, but it can also lead to the exclusion of the most vulnerable groups of society, who tend to have less access to such technologies. The role of technology in service delivery was addressed during the discussion session. Madhumitha raised that the choice to use technology for service delivery should always be coupled with asking ourselves who we may be leaving behind due to this choice and what alternative mechanisms can be put in place. This usually requires combining traditional, analogue models of delivery with technology-based delivery. This was seen in Bangladesh where the new emergency cash transfer relied on the national ID, interoperability-based web verification and digital payments. At the same time, other programmes were in place at the local level to support those who may have been digitally excluded. However, there can be reluctance to follow a hybrid approach with technology seen as a tempting solution. Finally, she stated that technology only changes the type of capacity that is needed rather than substituting or replacing the capacity. Because the path to digital inclusion is gradual, digital delivery will require human intermediaries e.g. in Bangladesh where trade unions were the offline intermediaries to support workers in opening bank accounts.

Another striking finding from this research was the lack of accountability mechanisms in place including grievance redress mechanisms (GRM) or systematic monitoring of the response. The responses studied in this report focused largely on two service delivery processes: targeting and payments. GRMs were largely absent or ineffective, as were case management and monitoring and evaluation mechanisms.

Several discussants and panellists weighed in on the question “What are the minimum standards for accountability in shock response and how should these be developed and implemented?” as part of the discussion session. Anthony noted that the lack of accountability mechanisms was disappointing given the important role of accountability mechanisms in supporting the impact of social assistance programmes and reducing exclusion errors. In a crisis context, accountability mechanisms are even more important as leaving out the most vulnerable can severely reduce the impact of the response. He noted that any grievance mechanism should be quite simple, easily understood, decentralised and available to affected communities. There is a role for technology here and there is evidence that if multiple functions of a cash transfer programme are delivered using a single mechanism (e.g. a mobile phone) this can support uptake of functions such as GRM. In routine programming, GRMs should be invested in as a core part of an intervention and not seen as an add-on and this can form the basis of the mechanism to be used in a crisis response. Alexandra added that having a strong routine GRM can then also be leveraged by non-state actors to prevent setting up parallel systems which can cause confusion and reduce uptake. Jana added that a related point is the importance of outreach and communication so that people have a clear understanding of the eligibility criteria and their entitlements. This is especially important when there is proliferation of programmes. Having strong communications and outreach in place is the first building block of an accountable response and other functions, such as GRM can be built on top of that.

The webinar ended with a Q&A session that can be accessed here or watched here.