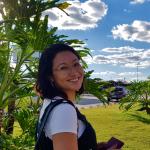 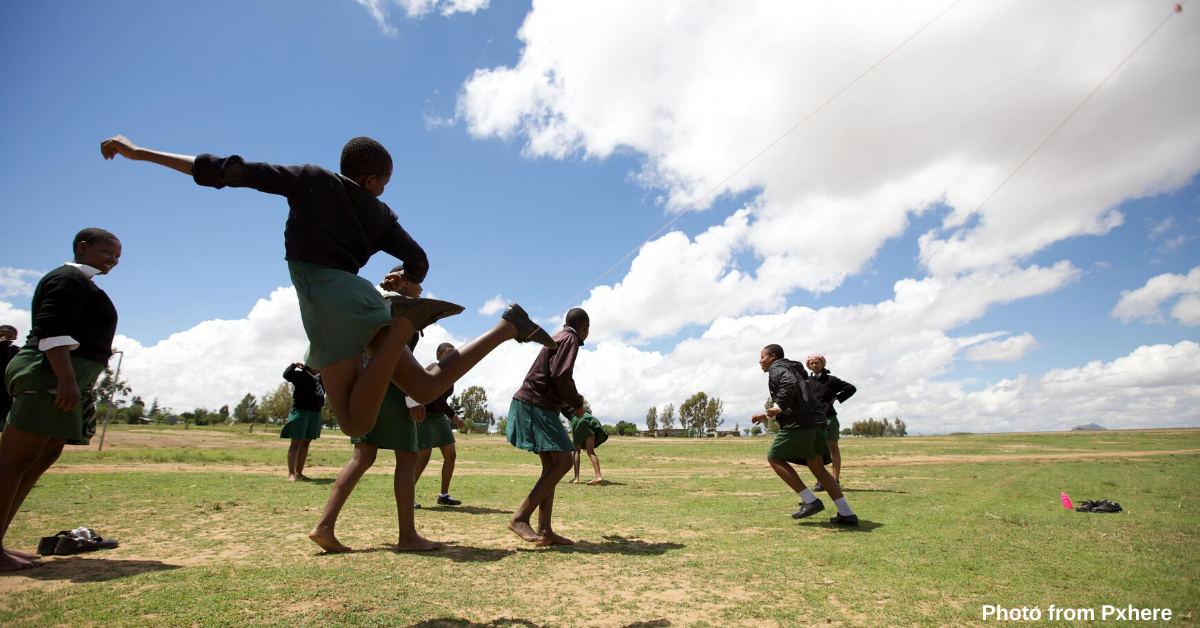 The ‘Social cash transfers, household targeting and generational relations in Malawi and Lesotho’ webinar took place on 29 October 2019. The webinar discussed the key findings of the four-year ESRC-DFID-funded research project, which explored in depth the impacts of three social cash transfer programmes on relationships within and between households in rural communities in Malawi and Lesotho. Three key findings were discussed during the webinar:

The research project team found that while all the cash transfers are viewed by recipients as invaluable tools for poverty reduction, their full effects depend on how they impact social relations. The webinar also explored the implications of the research on social protection policy and practice, particularly in the Malawian context.

The research on the relational impacts of social cash transfers

Nicola Ansell started the webinar by highlighting that although much is known about the impacts of social cash transfers (SCTs) on their target groups - particularly children and elderly people - regarding the symptoms of poverty, increasing levels of consumption, nutrition, school enrolment, immunisation, etc., knowledge is more limited regarding their wider impacts.

From a perspective that poverty is not only about symptoms but is also relational, the research project team aimed to understand the relational impacts of SCTs. The focus was on family, community and generational relationships, as well as knock-on effects on people and households that do not actually receive the cash transfers but are nonetheless affected by them in various ways.

The research was conducted between 2016 and 2018 as in-depth qualitative case studies of two rural villages, focusing on Lesotho’s Child Grants Programme (CGP) and Old Age Pension and Malawi’s SCT Programme. These SCTs are presented in some detail in the tables below: 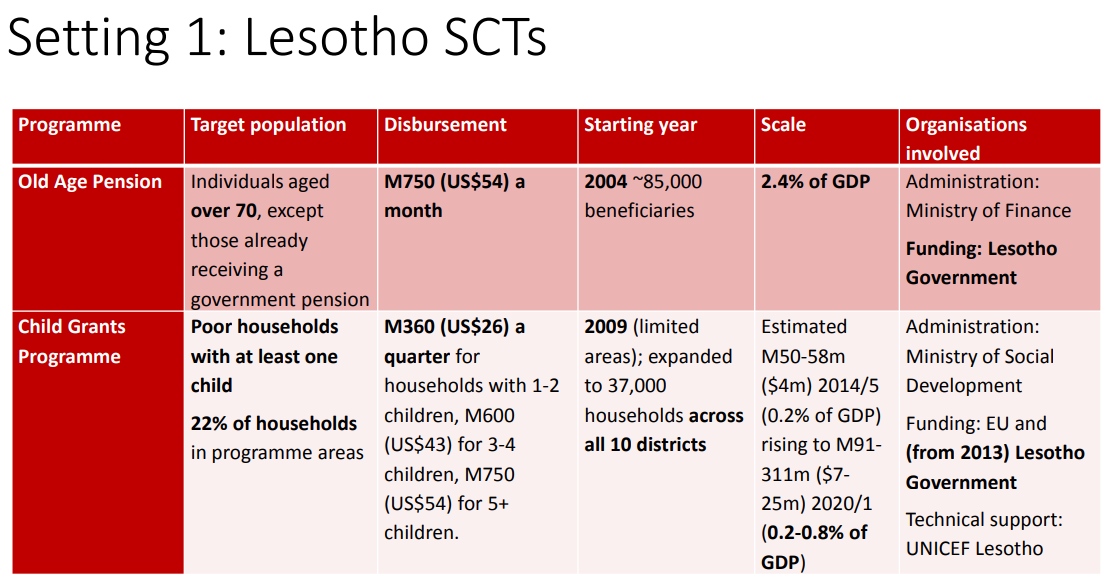 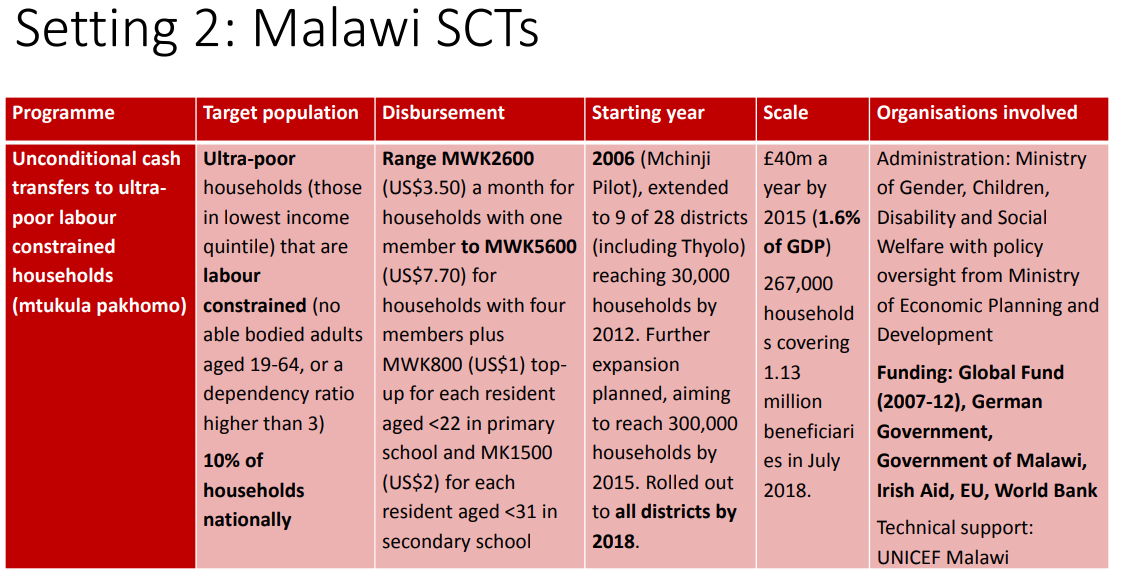 1. Household targeting is flawed because it is based on problematic misconceptions of household dynamics

Targeting makes false assumptions about recipient households, making it seem to local communities that they have been selected arbitrarily. Because receiving the cash transfer seems unfair, targeted households end up suffering from stigma within their communities.

The SCTs studied (Lesotho’s CGP and Malawi’s SCTs programme) target poor households using a combination of proxy means-testing (PMT) and community-based targeting. Both methods make a problematic assumption that households are relatively stable and unambiguous. However, households have porous and fuzzy boundaries due to several factors:

The research found an overall community perception that the households that receive the cash transfers are not the most deserving. In fact, results from a household profiling exercise showed that only six out of the 14 households with children in a Lesotho village that could be considered vulnerable received the CGP, and these did not include the two households with the worst vulnerability score. Ten households had a Multidimensional Poverty Index (MPI) of over 0.5, seven of which included children. Only one of these was among the households receiving the CGP.

There was a widespread perception in both communities that everyone should receive something. 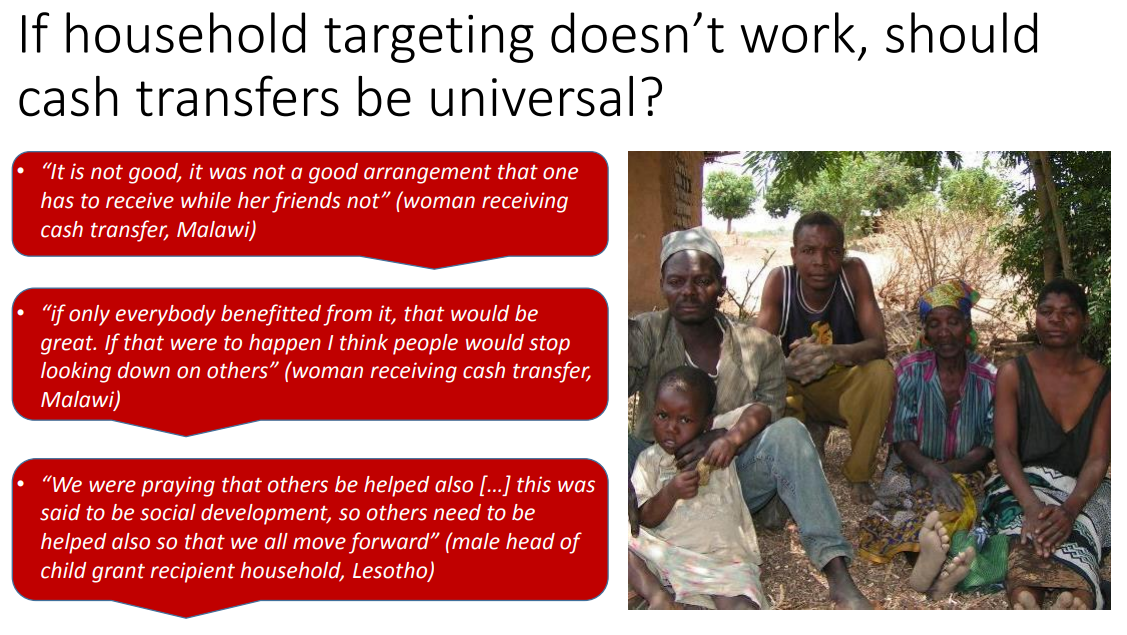 2.The benefits of social pensions extend beyond the individual recipients to wider families and communities

Within the household, the elderly people receiving cash transfers are able to take care of themselves and other family members, especially their grandchildren, and by making decisions on how the money is to be spent, they appear to have gained huge autonomy.

Within the community, the elderly beneficiaries are able to pay young people to work for them (collecting water, firewood, and performing other household chores), helping create jobs. Local businesses can also benefit from this, since the elderly spend their cash on goods and services.

Because cash transfers to the elderly seem to benefit others and strengthen family and community relations, social pensions had widespread support. Targeting the elderly was perceived to be fair to both non-recipient and recipient households. Shame and stigma were not attached to receiving social pensions. In addition, there was widespread political support for the universalisation of pensions.

Cash transfers to young people were seen as problematic and shameful, as though suggesting that young people are unable or unwilling to work. Young people themselves expressed aspirations to having a good job and wanting to work for their own money. They expressed a desire to contribute to development needs in their own communities, and to be paid to do so rather than receiving cash transfers as ‘free money’.

In Lesotho, the CGP was viewed less favourably than the Old Age Pension by many in the studied village. It was even called seoa holimo, which means “money falling from the sky”. In Malawi, a proverb that says “free things kill” (mahala wipha) was attached to the cash transfers, suggesting that the ‘free’ money received could come back one day to bite recipients. Thus, the young people and the community in general were not as happy to receive the CGP.

Comments on the research findings of Malawi’s SCT programme

Concluding the webinar presentation, Andre Felipe Bongestabs commented on the research findings and the Malawian context. In general, the development needs in Malawi are greater than the reach of the SCTs programme, which currently covers only 10 per cent of the poorest people in the country, while 20 per cent are considered ultra-poor and 50 per cent are considered poor. Since poverty is dynamic and there is little difference between the fifth (poorest) decile of the population and the rest, people in communities do not understand who gets what and why. One of the reasons can be found in the PMT method, which is used as a resource-rationing tool to ensure that the most vulnerable among the vulnerable are reached. This situation creates a general perception of the existence of the ‘deserving poor’ and the ‘undeserving poor’, which results in overall frustration with the programme.

In addition, there are often expectations regarding the ‘graduation’ of beneficiaries: that, in time, people will be able to support themselves. This expectation is aligned with the aspirations of young people, as shown in the research. However, the SCT programme alone is not enough. Access to markets and decent work are necessary to create opportunities for fair wages. For graduation to happen, cash transfers need to be adequate and regular. In Malawi, the delivery of benefits is still problematic and beneficiary data is not collected regularly, leading to outdated PMT assessments that result in benefits going to the less poor of the poorest population.

Therefore, the research findings have been important to shed light on the various implementation issues at the community level. In terms of policy implications, messages that became clear due to the research include: