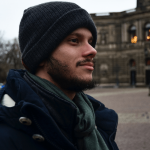 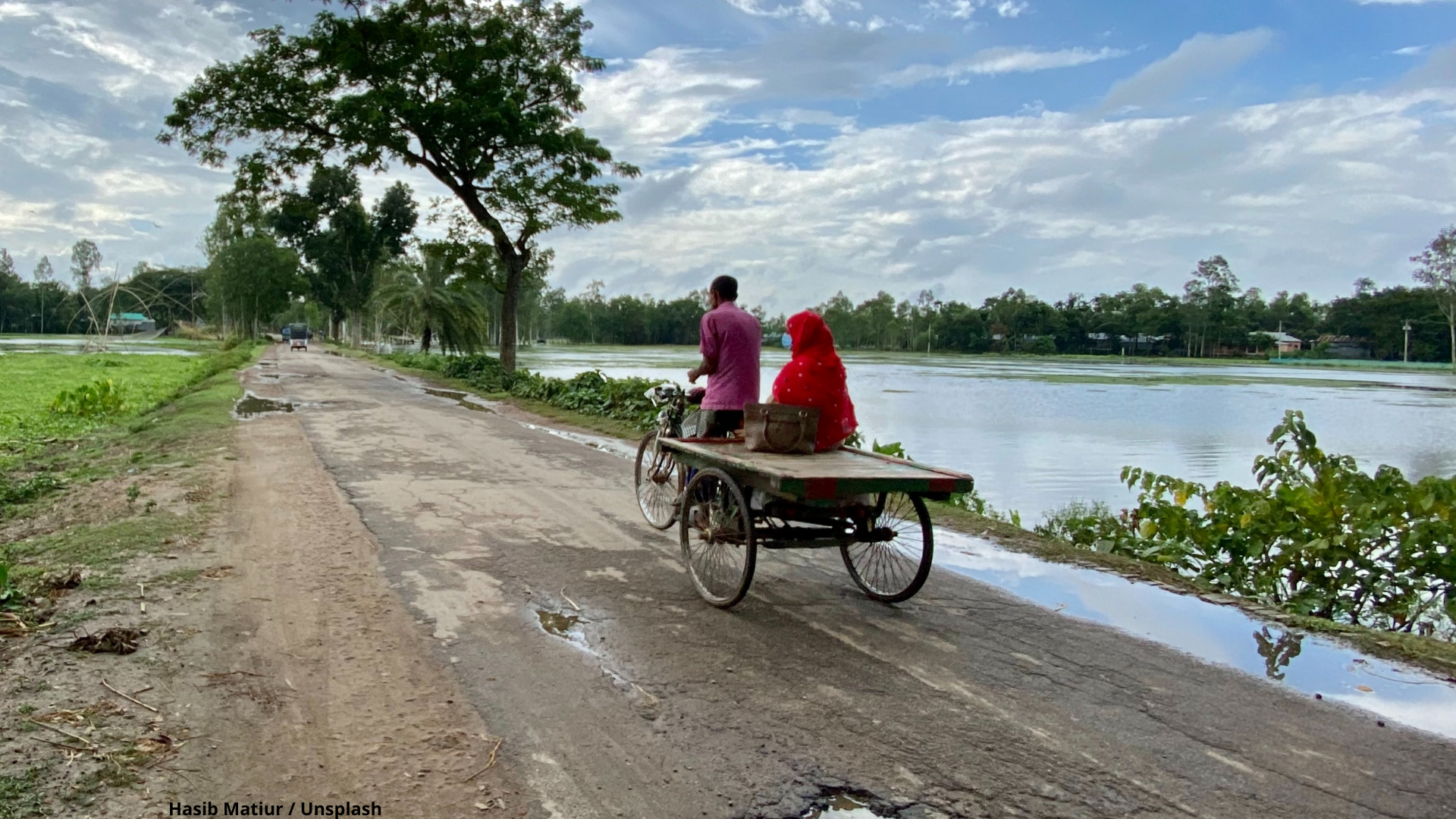 This blog draws from the findings and reflections discussed at the webinar “Resilience Building and Adaptability of Graduation Approach: Experience of and Evidence from BRAC Ultra-Poor Graduation Programme in responding to COVID-19 Shocks in Bangladesh”, held on 31 August 2021 and organised by BRAC and the Social Protection for Employment Community (SPEC).

This is the second webinar organised on the effectiveness of the Graduation Approach induced by the COVID-19 pandemic, following the webinar that was held on the Honduras Graduation programme.

The BRAC Institute is doing a relevant job of complementing the government of Bangladesh’s efforts to support the livelihoods and resilience of a vulnerable population. The focus of this webinar was to explore the improvements and adaptations implemented by BRAC in face of the 2020 pandemic context. A survey found that an amount of 14.8% was added in the already existing 20.5% of Bangladesh’s population living below the poverty line in March 2021. These so-called “new poor” are discussed in the webinar.

The webinar had contributions from the following panellists:

To further learn about these discussions, you can watch the webinar’s recording and see the displayed presentation slides.

Rozina Haque started her presentation by describing BRAC’s actions to reduce poverty worldwide. By creating opportunities for people to unlock their potentials, BRAC covered over 100 million people in Bangladesh and in other 11 countries. The following image presents an overview of what BRAC does: 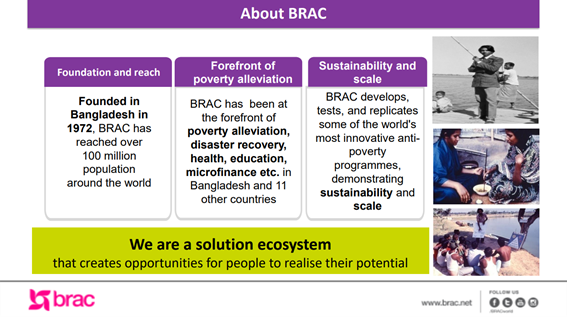 According to Ms Haque, it was noticeable in the 90s that Bangladesh’s existing poverty elimination programmes were not adequately reaching people who were facing extreme poverty, the so-called ultra-poor. She mentioned that this social class category faced three problems: (1) they were invisible to the government, as the latter lacked data about them and, consequently, could not provide the services; (2) the ultra-poor suffered from food insecurity, social stigma, and basic services such as health and education and (3) they did not have their own land or productive assets to rely on.

Considering this, BRAC designed a specific programme and implemented the graduation approach in Bangladesh in 2002. The Ultra-Poor Graduation Programme took effect from 2002 until 2020 and served more than 2.1 million entrepreneur households of 48 districts in Bangladesh.

As pointed out by Ms Haque, BRAC is proud to say that their approach has been successful. By creating a specific pathway out of poverty, the graduation approach has helped thousands of people to overcome hunger. The Ultra-Poor Graduation Programme scheme can be seen in the following image: 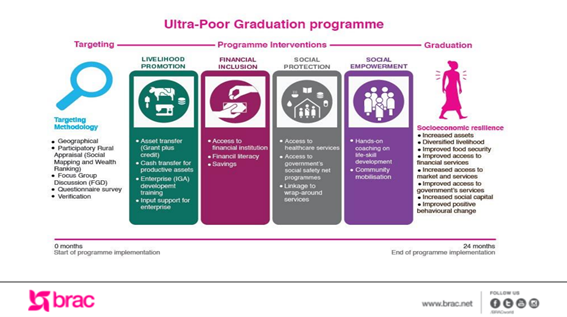 This approach was also evidence-based. Ms Haque presented the results of a randomized control trial conducted by the BRAC Institute of Governance and Development (BIGD) and the London School of Economics (LSE) on the participants from the 2007 programme cohort aiming to assess resilience and sustainability. The study’s timeframe was from 2007 until 2018. The conclusion is not only that the participants came out of poverty, but they also experienced significant improvements in a few indicators: 37% increase in annual income, 10% increase in consumption, they could save money up to 9 times more and doubled their increase for land access.

Ms Haque also addressed the Ultra-Poor Graduation Programme’s global adaptation. She mentioned that, by acknowledging BRAC’s work, the Consultative Group to Assist the Poor (CGAP) and the Ford Foundation piloted, in 2006, a graduation approach of this sort in 8 countries through 10 projects. This approach also gained recognition by different governments in nearly 50 countries through more than 100 projects and took out from ultra-poverty approximately 14 million individuals. The main indicators of success are income, self-employment, savings, consumption welfare, and psychological well-being.

One of the advantages associated with the graduation approach is how easily it can be adapted given different contexts. The following image displays an arrangement of how different backgrounds may be considered before implementing a specific programme: 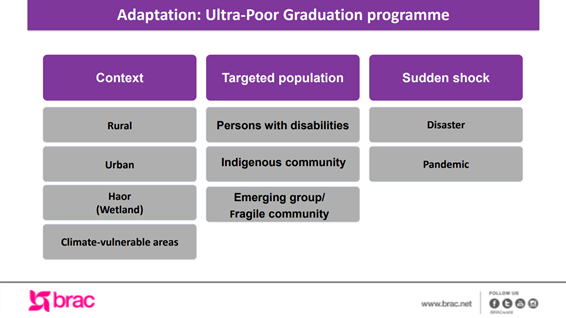 When COVID-19 hit, the case was the same. BRAC firstly analysed where social gatherings usually took place in Bangladesh, bearing in mind the social distancing restrictions. With this information, they tried offering the participants other options by creating an alternative livelihood and income generating activities at the household level. Accordingly, they provided them seed vegetables for gardening so that the participants could consume their own meal during the crisis and could also sell any excess food they might have had.

As mentioned above, Bangladesh faces a challenge of having a considerable amount of people who have reached the poverty line during the pandemic: the new poor. To address this, BRAC tried creating access for them to the microfinance. BRAC’s staff developed a business plan and provided the technical knowledge for many of the “new poor” to run their own businesses. BRAC also considered diversification by investing the provided loans in multiple income generating activities. Moreover, regarding engagement, BRAC made sure to include both men and women to be involved with these newly developed businesses.

The session was followed by a Q&A session, in which the other panellists could join the conversation. Following the evidence-based material that was presented, and according to BIGD and LSE’s research, Lisa Hanningan questioned what areas of focus should be prioritised to ensure that both the ultra-poor and the new poor could have less precarious livelihoods.

Imran Matin felt like the main challenge to this question would concern turning the BRAC graduation intervention in Bangladesh into a more secure process. Mr Matin mentioned the interaction of two processes that need to converge: the asset threshold that will eventually fade away combined with the occupational transformation on the individual level that must take place. Mr Matin is of the opinion that the interaction of these two processes creates resilience, which is what would ensure a more secure graduation process. He feels like actions such as experimentation and adaptation of the programme are well valued and should be the focus to lead the ultra-poor out of poverty.

As for an overview from the lens of a governmental body, Mr Mohammed Sarker was inquired about the importance of integrating the graduation approach and its learnings into government programmes and policies. He highlighted it as a governmental responsibility to ensure social protection for the people who are left behind. Moreover, he mentioned that the government of Bangladesh implemented 123 social protection programmes, and 25 of those are in line with the graduation approach. Mr Sarker further added that this approach has been recognised as a successful model and should be replicated in other sub-districts in Bangladesh. He indicated that almost 40% of those sub-districts are expected to be covered by this model.

When asked by Ms Hanningan about what could be done to better embed the graduation programme into the government’s set of social protection programmes, Palash Das explained that the main challenge is how to integrate the graduation approach into already existing social protection systems in Bangladesh and address the new poor at the same time. Mr Das emphasized that one of the biggest issues on these social protection projects are the mistakes in the targeting system, that end up leading to social exclusions. He also mentioned that it would be important to have a collaboration at the local level to discuss these problems.

In case you want to watch the Q&A session, you can follow this link.

This was the thirteenth webinar of the Linking Social Protection to Sustainable Employment webinar series, which was organized by GIZ and SPEC. Please join the Online Community Social Protection for Employment if you are interested in following more discussions on the topic.