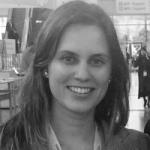 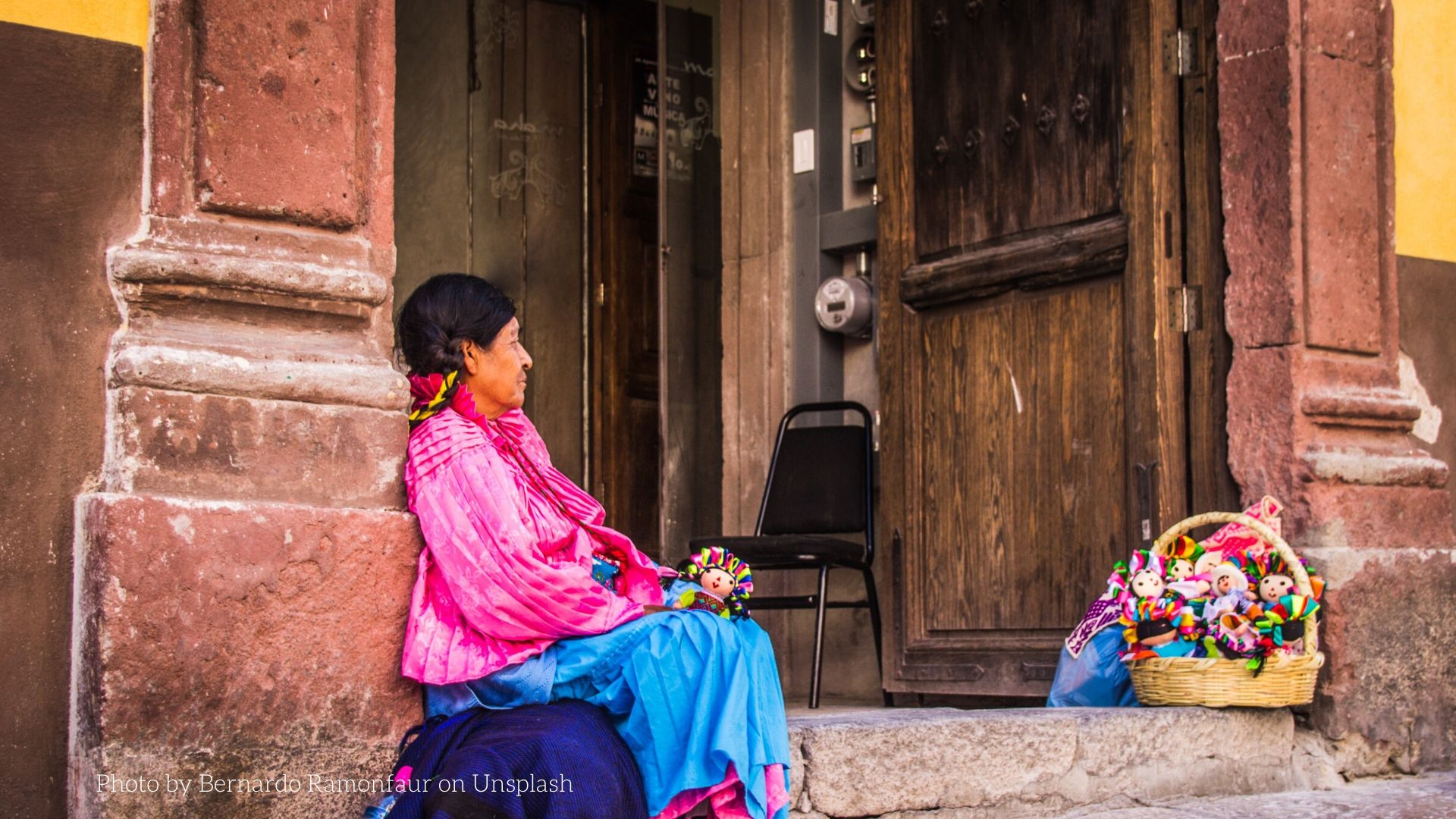 Challenging the narratives on gender: the power of assumptions behind policymaking

On 5th March, Development Pathways hosted a Pathways Perspectives webinar to challenge narratives in gender and social policy. We called on two advocates of gender equality - Maxine Molyneux, Professor of Sociology at UCL, London, and Juan Gonzalo Jaramillo Meija, Social Protection Officer at WFP, Rome – to share powerful arguments (and frustrations!) based on their experiences, debunking some of the common (mis)assumptions that are associated with gender. The webinar was moderated by Anasuya Sengupta, one of our Senior Social Policy Specialists, leading our work on women’s economic empowerment and gender analyses. 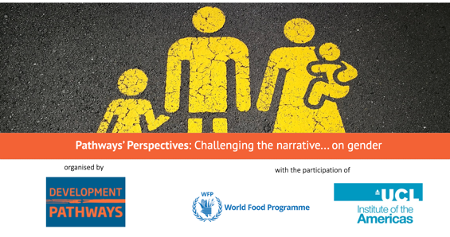 We are at the crossroads with a changing face of global geopolitics and rising inequality. It’s, therefore, crucial to ask: why are we consistently failing to change some of the pervasive policy narratives? In a lead up to International Women’s Day 2020, Pathways’ perspectives’ webinar focused on challenging underlying assumptions that have created misleading and even detrimental gender narratives in social protection. In fact, in the mainstreaming of gender, there has been a dilution of progressive approaches to achieving equity into more ‘digestible’ formats for policymakers, governments and implementers alike.

We asked Maxine Molyneux and Juan Gonzalo Jaramillo to share their thoughts on how development programming could take better account of gender relations by debunking some common assumptions.

Maxine:  The claim is often made that cash transfers (CTs) empower women because they give women control over how they spend the money. This is a fairly limited control since the cash is destined to be spent on the care and needs of children, and it is an amount set well below the minimum wage in order to discourage dependency.

Research that I and others have carried out on CTs in Latin America, Africa and the Middle East shows that women undoubtedly appreciate having the cash and the immediate relief that it provides. They gain self-respect and dignity from not being desperately poor and having to beg for loans in times of extreme hardship. However, are these subjective experiences, ones that may be transitory,  satisfactory evidence of empowerment?

In many evaluations that I have seen “empowerment” is seen as something that takes place largely at the micro, subjective level, involving attitudinal transformations such as a growing sense of self-esteem and status, rather than on acquiring the capabilities and material goods necessary to achieve sustainable security, control over their lives, and autonomy. While no one would deny that subjective and personal changes are important and necessary in any process by which individuals enlarge their opportunities, these changes can hardly constitute empowerment. If the concept of empowerment is to carry any analytic weight for policy purposes, it needs to be understood as a multi-dimensional, transformative process: one that enlarges women’s life chances and choices, assets and attributes, enabling them to escape insecurity and to secure equal opportunities and treatment.

If cash transfer programmes are to do more than just make use of women to secure their child welfare goals, and live up to the claim that they “empower women” then they need to do more than simply provide a subsistence allowance. They have to include other interventions that address women’s needs, with linkages to effective training and literacy, financial management, and comprehensive health services. For a start, they need at the very least include women in consultations over program effectiveness and objectives. When people get efficient and unhindered access to public services and share equitably in the benefits of economic growth, then we might say they are empowered.

Assumption #2 Being gender-aware is key to promoting gender equality. 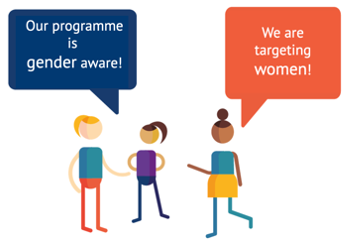 Maxine:  Gender awareness/gender sensitivity are fuzzy concepts - their meanings are unclear, and yet they are routinely used to signal virtuous conformity with progressive values, implying a commitment to gender equality. Some cash transfer programmes claim to be gender aware in targeting women as recipients of the transfer, and in recognising their value as mothers as they are uniquely placed to meet the needs of their children. Here gender-aware can too easily mean “making use of women”.

The main objective of CT programmes is to improve child-centric outcomes by promoting childcare practices. Mothers are the instrument or “conduit” for achieving these outcomes. They are, therefore, given training in infant and child’s health, and the cash is conditional on children attending school and health clinics regularly – designated as the sole responsibility of the mother. While these programmes claim to be gender-aware, little attention is paid to meeting the broad spectrum of the needs of mothers - other than those associated with childbearing and breastfeeding. In other words, it is assumed that women have no other work to do than to bear and care for children, while meeting the conditionalities imposed on them to prove their worth as carers. Meanwhile, men are completely sidelined from these programmes, as they are assumed to have no role in the care of the children – what Juan has called “free-riding men in the care economy”.

It is hard to see how this type of programme benefits women in any meaningful sense, let alone advances gender equality as it rests on and indeed reinforces traditional gender norms. A more demanding definition of “gender awareness” would recognise that gender refers to a set of social relations in which both men and women are involved, and which are governed by norms that tend to situate men in positions of power and advantage over women and children.

In short, gender equality commitments require transformative approaches to challenge the gendered divisions of labour and power in the domestic sphere, rather than reinforcing gender divisions of care.

Assumption # 3: Women are at the frontline of poverty” 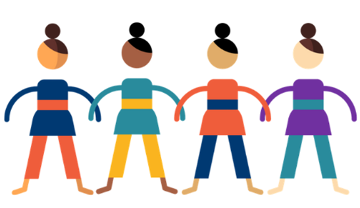 Juan Gonzalo: On a closer look, most cash transfer interventions clearly relied on a child-directed cash transfer, wherein women were yet again put at the service of social protection, instead of the contrary: making social protection programmes address their multi-dimensional needs, risks and vulnerabilities as women, and not just as carers of children.

So how is social protection failing women and girls in particular?

Evidence shows that gender risks are further amplified when other disadvantageous social identity markers are added to the equation, such as age, race, ethnicity and disability. These put women that are recipients at high risk of abuse and mistreatment by social service providers and implementers, especially given the absence of reliable complaints and redressal mechanisms.

Yet, many argue that these transfers are a symbol of gender justice that compensate women’s unpaid care and domestic work. Such claim and underlying assumptions can be dangerous when lacking evidence (and hence nuance): validating tokenistic “compensation” as sufficient recognition of a traditionally neglected feminised sector that is the backbone of an economy, even as these low transfer values fail to offer any real income security to mothers and carers.

Further, the compensation for women’s “traditional” roles only serves to narrowly commodify care, which has undesirable repercussions, such as transferring caregiving responsibilities from mothers to older daughters or grandmothers, or from wealthier, educated women onto poorer women by means of informal employment on very poor wages. It can also increase women’s confinement to the domestic sphere and incentivise their retraction from the formal labour market; subsidise the cost of developing state-regulated social care and social work sector; and finally exempt, deprive and perpetuate the “free-riding” of men in the care economy.

Assumption #4: Child’s wellbeing is heavily dependent on a mother’s wellbeing 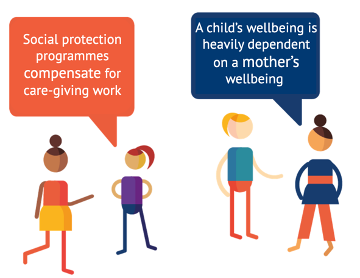 Juan Gonzalo: Mothers are seen as the most effective “development conduits” to ensure the rapid impact of targeted investments in nutritional, health and educational outcomes for children – all under the banner of social protection. Men are, on the other hand, entirely excluded on the premise they are always part of the problem and never (or rarely) part of the solution. Moreover, men are considered already empowered and undeserving of social assistance. Whereas when women are adversely affected by gender norms, for instance, in their role as breadwinners, then they can face a lack of job opportunities.

In my natal Colombia, the flagship conditional cash transfer Familias en Accion provides an excellent example: for almost two decades, the programme has heavily relied on locally elected “Mother Leaders” to support implementation, as well as enforcement and motivation through ”leading by example” – by fulfilling the conditionalities. They are gender-specific as they only target women, who are expected to shoulder a multitude of responsibilities on their own: ensuring children’s attendance to school and medical check-ups, enhanced entrepreneurship, savings and investments.

The narrative even manifests in standard datasets on child nutrition: where mother’s education is used as an indicator to establish causality, without any consideration of the father’s role and relation to such outcomes. Such narratives reinforce the gendered division of labour rather than challenge and change them, starting with the redistribution of unpaid care and domestic work (SDG 5.4).

But change can happen when gender is understood as a relational experience rather than specific to an individual. My research, in Mexico and Brazil, indicates that safe spaces for introspection and dialogue can lead to questioning of prevailing and pervasive social norms that offer privilege and provide a “patriarchal dividend”, but disempower other family members; thereby hampering the well-being of entire households and communities.

Men’s recognition of their own disadvantage - or of a loved one, rooted in those largely unexamined social norms that engender them as well - is the first step to “incentivising” more men to engage in responsible fatherhood and to be in favour of empowering women and girls”.

So what are the key takeaways?

Anasuya: All of these assumptions hold up the narrative or “fairytale” of gender, but especially two seem to reinforce the stereotyping of gender in social protection

As Juan and Maxine rightly pointed out, empowerment has been delineated from “entitlement” and rights, stopping at the subjective experience of “power within” rather than utilising this micro-level shifts to enable women to become “entitled”. By providing access to women to social security, appropriate services, equal wages, wealth and assets, and platforms for political representation, countries would fundamentally start to shift power dynamics in gender relations, even though still an uncomfortable thought for many including those sitting in positions of power.

To date, the most common format of “gender-aware” programming is to instrumentalise women for achieving child welfare outcomes, and stigmatising them if they fail to live up to the social expectations of being a mother. It further invisibilises men from the “family unit” and thus parenting and caregiving, or stigmatizes those who seek to become engaging and responsible fathers.

There is a need to move towards an understanding of gender as a relational concept, with intrinsic social norms and values that shape a gender hierarchy - which defines who is valued and how, whose time is valued, whose work is valued. Understanding these value-centric relations and structures would open up avenues for introducing change.

But, that is perhaps a bigger agenda, too big for social protection systems to carry on their own. Ultimately, when it comes to income transfers contributing to gender equality and women’s economic empowerment, are we constantly expecting too much?