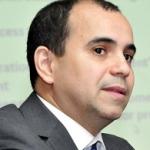 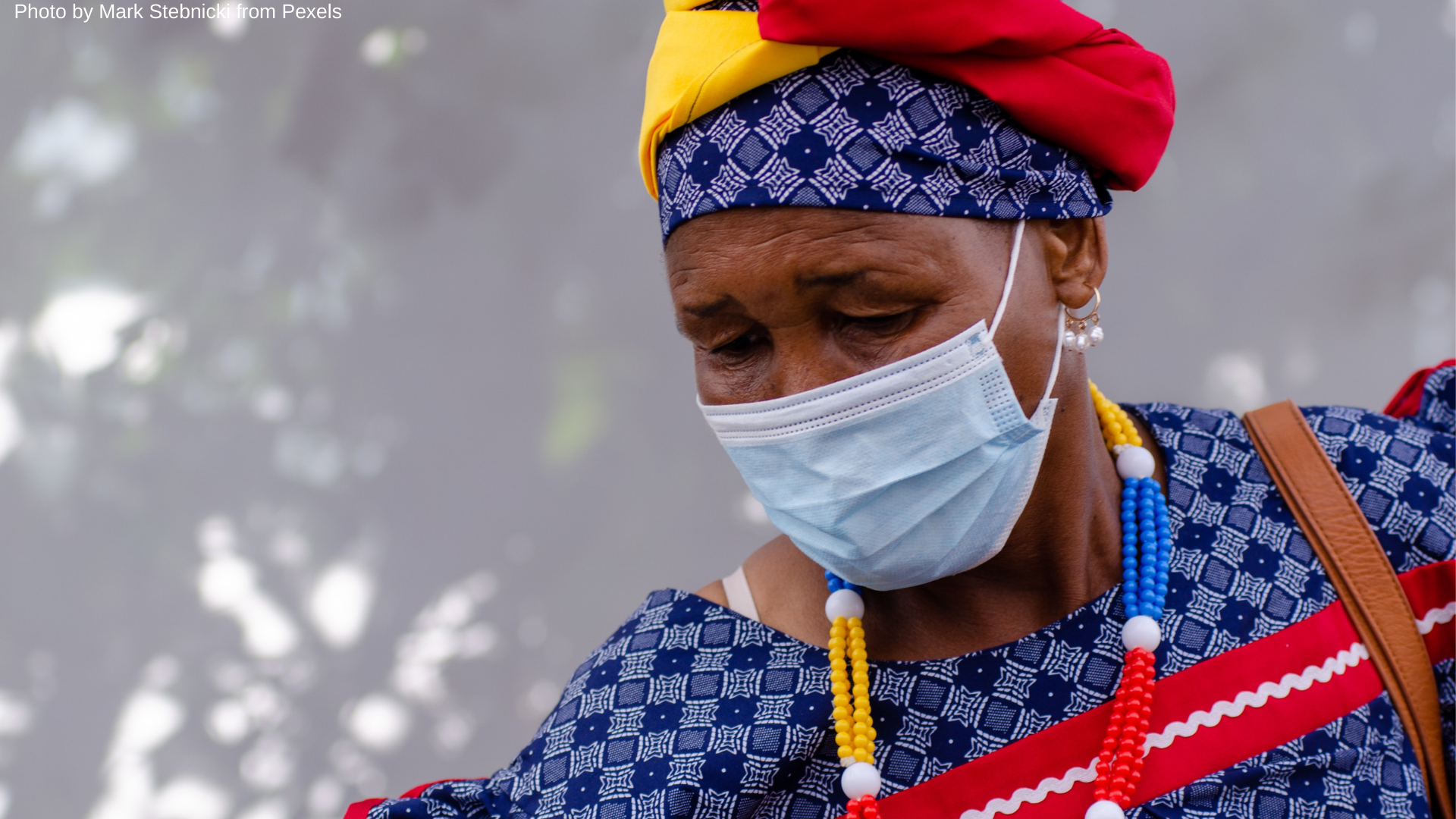 The unprecedented use of social protection instruments was a unique feature of the fiscal measures adopted by governments worldwide in response to the health and socioeconomic crises triggered by the COVID-19 pandemic. Even advanced economies with well-stablished welfare systems could not rely exclusively on the vertical and/or horizontal expansion of existing programmes. They were forced to quickly establish new (even if temporary) social protection measures to ensure income and job security for workers and families, as well as liquidity alleviation for firms and families.

In the global South—despite differences in the scale of fiscal packages—the expansion of existing programmes and the implementation of new social protection measures was also unprecedented. Therefore, the IPC-IG, in collaboration with SPACE, and with support from the Deutsche Gesellschaft für Internationale Zusammenarbeit (GIZ) GmbH on behalf of the German Federal Ministry for Economic Cooperation and Development (BMZ) and the UNDP, has developed a detailed database anchored in the conceptual framework of shock-responsive social protection to map COVID-19-related social protection responses in global South.

The database specifically looks at: a) the horizontal expansion of social protection through increased coverage of existing programmes and/or the adoption of new programmes; b) the vertical expansion of social protection through increases in the value of benefits, the extension of permanence in a programme beyond the normal duration, or addition of new components; and c) adaptations of existing programmes to make them resilient to COVID-19-related shocks.

The mapping covers the following regions: Latin America and the Caribbean; sub-Saharan Africa; the Middle East and North Africa; South Asia; and East Asia and the Pacific. In this blog article we explore this database to highlight differences in the main features of countries’ social protection responses across their income groups, rather than across global regions [1]. It is based on the section 3.2 of the Article “Fiscal Policy and Social Protection Response to COVID-19: from emergency response to economic recovery” that I co-authored with my Ipea colleague Rodrigo Orair and published in August 2021 in Revista Tempo do Mundo.(Orair and Soares 2021)

Table 2 shows the type of social protection support cutting across different components. Cash transfers corresponded to 45 per cent of the total number of measures and include: (i) adoption of emergency cash transfers, (ii) temporary expansion of pre-existing programmes; (iii) extension of unemployment insurance (social insurance); (iv) wage subsidies paid directly to employees, self-employed workers or indirectly to employers, on the condition that workers working reduced hours or under technical unemployment were not dismissed. Wage subsidies were usually implemented in the sectors that were most affected by containment measures, such as tourism and hospitality.

Liquidity alleviation measures comprised the second most important support category (33 per cent). They include subsidies for families and businesses, such as postponement of water and electricity bills and/or rent payments, and/or temporary reductions or waivers, as well as subsidies for workers and employers, including the postponement and/or temporary reduction or waiver of social security contributions, taxes or loans payments. Another important component was subsidised credit to finance the firms’ payrolls and/or support small and medium-sized enterprises, conditional on a moratorium on the dismissal of workers.

Liquidity alleviation measures were only more prevalent than cash transfers in low-income countries (41 per cent vs. 28 per cent, respectively). In-kind transfers were also a more common instrument (20 per cent) compared to other country income groups (e.g., 11 per cent for lower-middle income countries). Other types of support, such as temporary health insurance and/or wage incentives for healthcare workers as compensation or to attract more workers (resilience of healthcare sector) were used more sparingly and were possibly associated with the organisation of the provision of healthcare in some countries that required either supply- or demand-side subsidies for the health sector using social protection instruments. Finally, training was not very prevalent, possibly because it would be more suitable for the recovery phase rather than for emergency response.

Table 2. Type of social protection support by country income group (as a percentage)

Table 3 shows the different categories of income support provided across different social protection components. Overall, cash support based on social assistance benefits (emergency cash transfers, unconditional and conditional cash transfers) comprise 45 per cent of the 471 measures related to cash support, with a higher prevalence of new emergency cash transfers (28 per cent) compared to pre-existing non-contributory conditional (5 per cent) and unconditional (12 per cent) cash transfers. After the aggregate cash transfer category, wage subsidies accounted for 33 per cent of all cash support measures. A striking feature of the distribution of cash support is the low prevalence of unemployment insurance measures (4 per cent of the total) as an instrument to alleviate the effects of the COVID-19 crisis. This is true even for high-income countries in the global South, where it amounts to just 7 per cent of all income support measures. In these countries, wage subsidies played a much stronger role in providing income security to workers (44 per cent), which may have rendered unemployment insurance-related measures redundant. A possible explanation for these figures was the nature of the crises caused by the pandemic, leading governments to prioritise the preservation of job matching to reduce transaction costs and ensure a quick recovery over simply ensuring a minimum income. In this context, wage subsidies were much more attractive than supporting workers after dismissal. Even in upper-middle-income and lower-middle-income countries, wage subsidies were responsible for about 1/3 of the income support measures. However, in low-income countries, unemployment insurance measures were completely non-existent—reflecting the absence of this instrument as part of broader social protection systems—and wage subsides (11 per cent) were less prevalent than public works measures (19 per cent). Public works measures consisted mostly in adaptations to the containment measures, with payments being guaranteed even if work sites were closed, thus working as a de facto wage subsidy.

Table 3. Types of income support by country income group (as a percentage)

Table 4 shows that 40 per cent of the 155 wage subsidy interventions mapped in countries of the global South were paid directly to employees (wage workers) and just 23 per cent were paid through the intermediation of employers. In high-income countries, wage subsidy measures were mostly channelled through employers (43 per cent of the 37 wage subsidy schemes mapped in these countries). However, in middle-income countries (both upper-middle and lower-middle), most wage subsidies were paid directly to workers—42 per cent and 55 per cent, respectively. Even though wage subsidies in these countries could be confounded with non-contributory social assistance cash transfers, the fact that workers (or their employers) were required to submit documentation stating or proving that workers were working reduced hours, clearly places this type of intervention under the wage subsidy category.

Wage subsidy interventions targeting both employees and self-employed workers through the same scheme were the preferred option (67 per cent) in low-income countries where no wage subsidy intervention channelling resources through employers was mapped. Most wage subsidies in low-income countries targeted workers (both salaried and self-employed) in high-contact services such as tourism, restaurants and markets, conditional on proof of occupation and/or sector of activity, leading to a relative low coverage of the total workforce.

Finally, it is important to mention that 15 per cent of all wage subsidies covered self-employed workers exclusively, in addition to another 15 per cent that covered both employees and self-employed workers. Although this type of intervention is traditionally linked to formal workers, the COVID-19 response seems to have innovated in reaching out to informal workers through wage subsidies and not simply by expanding social assistance interventions. Thus, even though informal workers are usually identified as part of the so-called ‘missing middle’—i.e., covered neither by social insurance nor social assistance—innovative wage subsidies requiring some occupation/business certification were quickly implemented to ensure their livelihoods and income security. This feature of the COVID-19 response suggests that there is room to adapt standard forms of social insurance to also cover informal workers and that their identification does not seem to pose a major challenge—or, at least, one that is not as unsurmountable as previously thought. 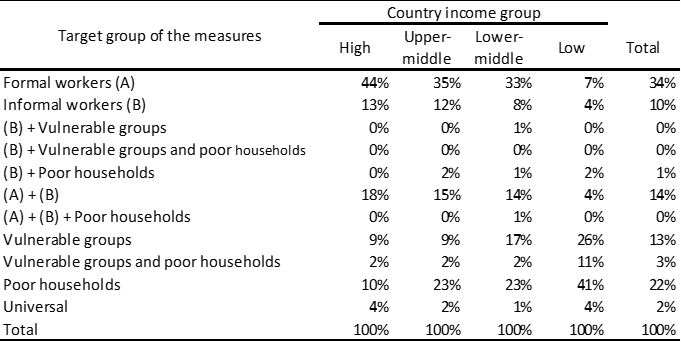 As shown in Table 2, liquidity alleviation measures were the second most used instrument (after cash support). They were intended to take financial pressure off from families, workers and (small) businesses through different types of subsidies as well as taxes, public utility bills, rents, loans, and social security deferrals, waivers, and reductions. Of the 358 liquidity alleviation measures, 49 per cent were subsidies, 18 per cent were linked to the flexibilisation of financial commitments of families, workers and small businesses, and 17 per cent correspond to flexibilisation of social security contributions for workers—both employees and self-employed workers—as well as for employers. Other measures included subsidised credit for payrolls and subsidised credit for workers and small businesses. Subsidies were even more prevalent in low-income countries, corresponding to 86 per of all liquidity alleviation measures. 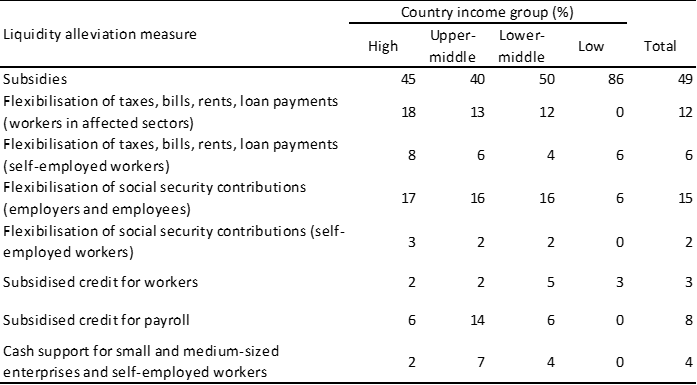 Table 8. Distribution of subsidies by country income group (as a percentage)

This article aimed to highlight differences in the social protection instruments adopted by countries of different income groups. The data show that low-income countries adopted fewer measures compared to high- and upper-middle income countries, the former had to rely mostly on social assistance measures, with a strong prevalence of emergency cash transfers and subsidies in their response.

Although many analyses of the social protection responses to COVID-19 have focused mostly on cash transfers, subsidies not only had a key role in attenuating the impact of the resulting crises in low-income countries by alleviating the financial burden of certain fixed expenses and obligations, but they also ensured that those most in need had access to digital technologies that would allow them to enrol in emergency cash transfers and also receive benefits, for example, via mobile transfers—as highlighted by Gronbach (2021). High- and upper-middle--income countries had a much more diversified menu of social protection responses, featuring not only social assistance cash transfers, but also wage subsidies, both of which played a very important role in securing jobs and income.

The responses to the pandemic demonstrated the potential of social protection instruments to quickly react to covariate shocks, not only by expanding coverage and benefit levels, but also adapting existing programmes and tools to address the needs of the most affected and most vulnerable populations. Challenges ahead include building on these innovations to improve social protection coverage, adequacy, and comprehensiveness during normal times, as well as preparedness for times of crisis.

[1] For an analysis using the same database, but focusing more on differences across regions, see Section 2 in Hammad et al. (2021). Next Practices—Innovations in the COVID-19 social protection responses and beyond. <https://socialprotection.org/discover/publications/next-practices-innovations-covid-19-social-protection-responses-and-beyond>

This post is part of the ‘COVID-19 Social Protection response series’, a 12-piece blog series featuring discussions based on data and evidence from the interactive dashboard ‘Social protection responses to COVID-19 in the Global South’, developed by the International Policy Centre for Inclusive Growth (IPC-IG) in partnership with SPACE and sponsored by Deutsche Gesellschaft für Internationale Zusammenarbeit (GIZ) GmbH, on behalf of the German Federal Ministry for Economic Cooperation and Development (BMZ) and UNDP Brazil. The dashboard illustrates part of the data compiled in the COVID-19 tracking matrix and provides detailed insights into countries’ social protection responses to the crisis, working as a repository of experiences and government practices in shock-responsive social protection taking place in developing countries worldwide. Its indicators are divided into seven thematic sections: overview of responses, type of adaptation, timeliness, identification of beneficiaries and application tools; delivery mechanisms; coverage; and adequacy of benefits. This blog series is supported by the Department of Foreign Affairs and Trade (DFAT) of Australia.