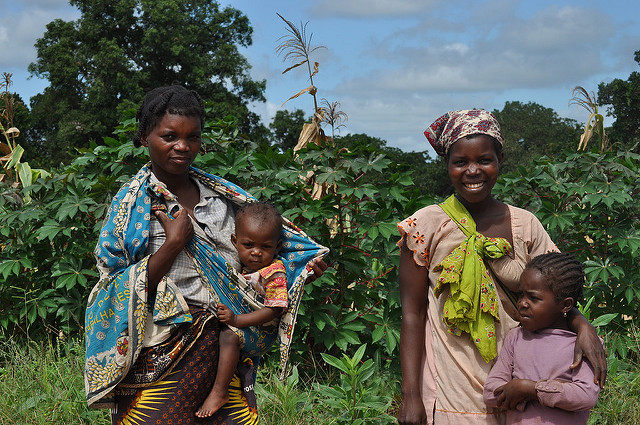 The exchanges in the field of food and nutritional security among governments and civil society organizations from the Portuguese speaking counties have intensified during the last decade with a visible increase in international efforts to achieve the Millennium Development Goals. In this scenario, the Food and Agriculture Organizations of the United Nations (FAO) has  been engaged in several initiatives and projects for South-South and multilateral cooperation.

After the establishment of the Zero Hungry Program, Brazil became an international reference for food and nutritional security institutional building and started to actively develop partnerships with developing countries, many of them in cooperation with FAO. During this time, exchanges among civil society organizations also increased. These contacts made possible the formation of the Portuguese Speaking African Counties Food and Nutritional Security Network (REDSAN-PALOP in Portuguese), established in 2007 with the support of the International Food Security Network[1]. The African network evolved into the Community of Portuguese Speaking Countries Network (REDSAN-CPLP in Portuguese) with the formal integration of Brazil, Portugal and East Timor national forums[2]. Since the Network’s first steps, family farming has been a central issue. In this context, experience sharing within African countries and Brazilian support to the regional discussions were main influences of this process.

Besides the civil society contacts and the country-based projects in which institutional knowledge was exchanged, CPLP Heads of State formally launched a regional Strategy for Food and Nutritional Security in 2012. The Strategy, strongly supported by FAO, aims to contribute to the eradication of hunger and poverty, taking into account the human right to adequate food. This is hoped to be achieved through strengthening co-ordination amongst Member States and improving food and nutrition security policies and program governance. For this purpose, Member States have adopted common principles of their individual and collective action in the construction and reinforcement of legal and institutional frameworks, public policy building and strengthening, and the reinforcement of the need for strong budgetary frameworks.

The regional action is based on three axes: 1) strengthening the governing sector for food security and nutrition; 2) promoting access to food and improving the livelihoods   of the most vulnerable groups and 3) iIncreasing internal food availability based on small producers. For this purpose, a Food and Nutritional Security Council (CONSAN-CPLP) was created as a cooperation mechanism, a ministerial and multi-stakeholder platform set up to coordinate policies and programs and to advise the CPLP Conference of Heads of State and Government[3]. Among the Strategy´s main achievements has been the creation of national food security councils in Cape Verde, Sao Tome and Prince and Guinea Bissau, the reform of the exiting Council in East Timor and the recent mobilization for the creation of national councils in Angola and Mozambique.

Another relevant achievement was the launch of the Community Guidelines for Support and Promotion of Family Farming in the Member States. The document produced under CONSAN´s Working Group on family farming with stakeholders’ contributions from governments, universities, civil society organizations, private sector stakeholders and virtual consultations was ratified in the Second Extraordinary CONSAN Meeting, on June 8th 2017 in Brasilia.

The Guidelines correspond to a set of common priorities and principals to support CPLP Member States in the development of sustainable agricultural policies for the eradication of hunger and poverty. The themes covered by the document are closely linked to the Sustainable Development Goals (SDGs). In this document, general guidelines are set for recognition, identification and the promotion of family farming. Other relevant topics covered in the Guidelines are the composition of political, legal and institutional frameworks for consolidating an inclusive food security governance; the access to means of production, with an emphasis on access to land, water and other natural resources; access to markets and guaranteed income; social protection and access to rights, preservation of biodiversity, the economic autonomy of rural women and the inclusion of youth.

During the Guidelines elaboration process, the World Rural Forum recognized the importance of this initiative and stakeholders involved in the MERCOSUR´s Special Meeting of Family Agriculture (REAF in Portuguese)[4] - a forum that inspired CPLP in the initiative of family farming identification for designing and implementing specific policies for vulnerable groups - declared interest in developing public policy guidelines for family agriculture as well. In addition, other regions have shown an interest in developing similar documents, such as the Regional Rural Dialogue Program for Central America and the Dominican Republic (DRRP in Spanish) and the Pacific Island Farmers Organisation Network (PIFON)[5].

The Guidelines are inserted in the global movement for the construction of institutional capacities presented in the Voluntary Guidelines to Support the Progressive Realization of the Right to Adequate Food and the Voluntary Guidelines on the Responsible Governance of Tenure of Land, Fisheries and Forests, both developed by FAO in the context of national food security. During the Second CPLP Family Farming, Food and Nutritional Security Forum[6], held in Lisbon, in 2016, land governance arose as a central discussion topic. As a result of these discussions, a multi-stakeholders Pact for Sustainable Governance of Land was proposed in order to highlight the emergencies claim of this issue among the Guideline priorities. Besides that, the creation of an Observatory for Monitoring the Implementation of the Voluntary Guidelines on Land Governance was reaffirmed as a relevant step towards the implementation of this Pact in the 2017 CONSAN-CPLP Meeting Final Declaration[7].

The Guidelines central proposal is to serve as a basis for the development of national policies through concept appropriation by the different stakeholders in each country. As an example of the ongoing mobilization for national use of the Guidelines, in June 2017, the National Agriculture Confederation of Portugal (CAN in Portuguese) held a national conference to discuss the proposition of a Family Farming Statute in Portugal.

Although this regional initiative was celebrated as an important political achievement   by stakeholders engaged in rural development and social protection, it is crucial to highlight that the Guidelines will have a rational use only if actively supported by national authorities. Therefore, the impacts of this regional construction are still uncertain. Despite future uncertainty of actual implementation, a positive outcome to be highlighted was that throughout this process, some contestation towards blind spots in national policies were pointed out and with that, some space for political debate was opened.