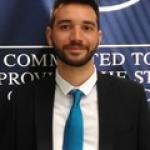 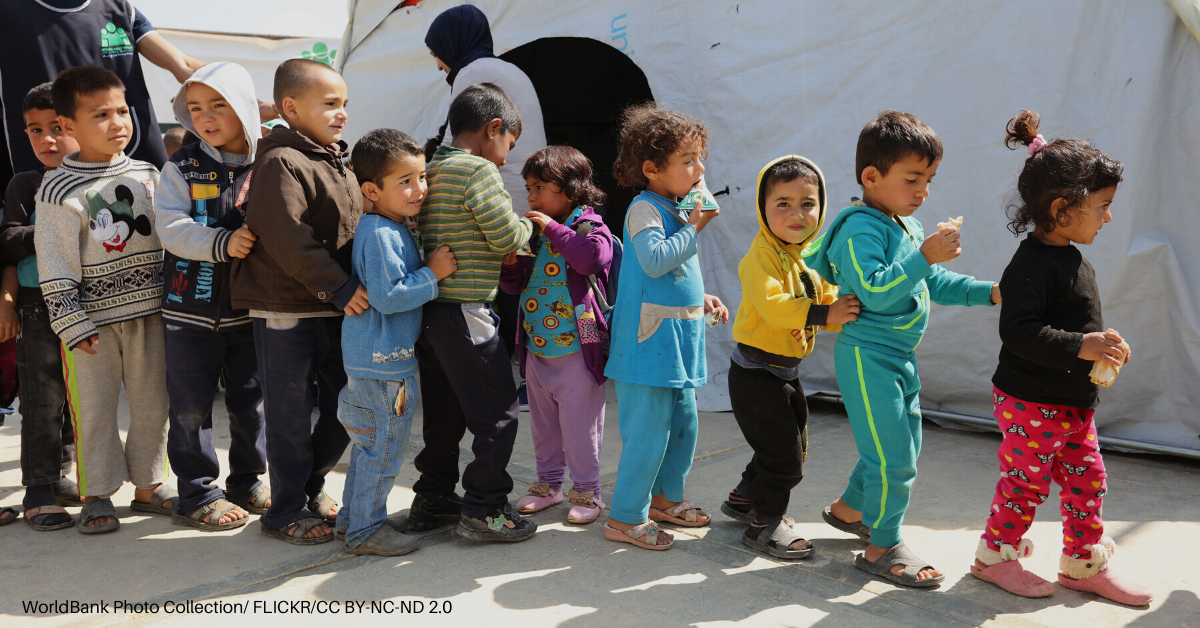 Since 2011, many Middle East and North Africa (MENA) countries have been experiencing uprising conflicts, humanitarian, economic and political crises. In this context, many governments sought to increase their social protection expenditures to address pressing population demands.

Children represent more than a third of the region’s population and will soon transition into working age. Despite significant progress in reducing extreme poverty and improving health, education and child survival rates, multidimensional child poverty remains a concern in the region.

While social protection is key to ensure children’s well-being, MENA countries currently spend only 0.1% of their GDP on social protection for children.  The need for expanding the coverage of social protection systems (and particularly child-sensitive programmes) is undeniable. The existing social protection programmes in the region rely excessively on universal subsidies and contributory insurance schemes, providing limited coverage for families outside formal labour market and lack adequate financing.

The study promoted by IPC-IG focused on analysing the current state of fiscal spaces and explored ways to free up resources, aiming to increase social protection expenditures and ensure the sustainability of the programmes. 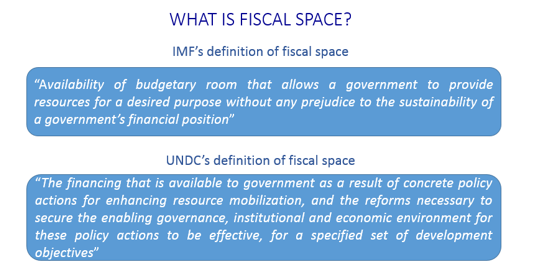 The framework of analyses for the study was based on the fiscal space diamond, developed by Roy et al. (2007), which consists in a tool for mapping different fiscal instruments to finance a development strategy. An adaptation of the diamond was used in order to capture internal sources of fiscal space, excluding the original Official Development Assistance (ODA) dimension.

Hence, a fiscal space triangle was used to analyse all MENA countries except Palestine, Syria and Libya. Each dimension of the triangle received a score from 0 to 1, synthesizing a country’s potential to increase fiscal space trough that specific dimension.

The arrow represents the path for the country to take to create fiscal space. It is set by adding the three vectors of the triangle, which means that one dimension can offset another. A larger arrow indicates a clearer path, whereas a small arrow indicates a less clear solution (which can mean that the country has many options to create FS). 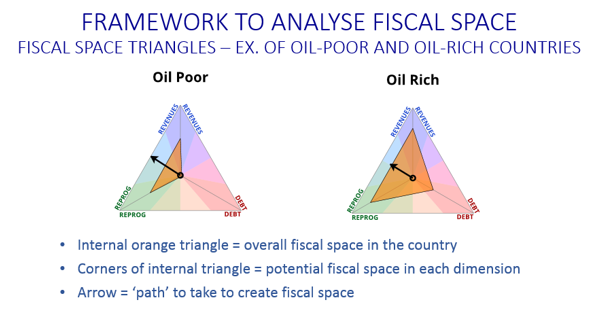 It is important that social protection for children has stable sources of financing. Domestic Resource Mobilization (DRM) may be the best option for MENA countries to expand their fiscal space. These nations should consider increasing their budgetary room trough improving revenues mobilization. Scaling up tax revenues could be achieved by relying more on direct taxation, increasing progressivity and improving enforcement and compliance. Other options can also be considered as creating revenue from natural resources.

Reprogramming of expenditures can also be a viable option. In this case, governments should systematically assess their budgets and evaluate policies in order to identify inefficiencies and create fiscal space for higher-impact policies. Excessive spending on high-cost and low-impact policies is a problem for all MENA countries. In these countries, energy subsidies consume great part of the budget for social expenditure and are proved to be costly and regressive.

As for a deficit financing option, there is no fixed rule on what an acceptable amount of debt would be. Higher debts can create high fiscal spaces imbalances and reduce capacity of countries to expand their social protection coverage. This option can find their place in countries which the debt-to-GDP ratio is low, but there is a need to prioritize debt management and improvements in macro-fiscal conditions.

In nations afflicted by crises, options to increase fiscal space face restraints and DRM can be challenging. In these cases, Official Development Assistance (ODA) represent a better option to finance social protection as part of emergency response. In the long term, however, countries should note rely on ODA, since funds are usually insufficient and unstable.

Given the specificities and diversity of macro-fiscal contexts, some countries might rely more on one option than others. Usually, resources mobilization varies for each country, since social protection programmes differ in design and scale.

UN-ESCWA have recently launched a new report about rethinking inequalities in the Arabic states. The report addresses inequalities beyond non-income dimensions, such as health, education and living conditions. The region made significant progress throughout the years with improvements in most indicators. 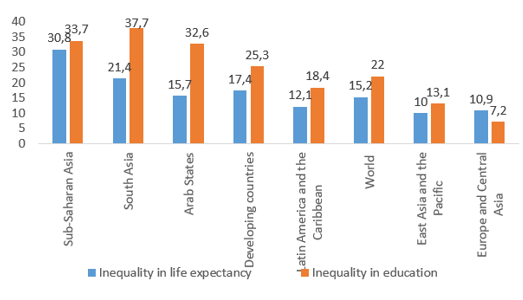 Inequality gaps are greater among vulnerable groups, such as rural communities. Inequality of opportunities have also remained high, especially in secondary education. A more in depth look at the indicators reveals that family wealth and the level of education of the head of the household have a great impact on this matter.

Although the region has reduced income inequalities and Arab children and youth have achieved progress in basic health and education, the report does not measure the quality of the public services offered and inequalities rates in the MENA region are still among the world’s highest.

Fiscal space in the Arab region with a focus on mobilizing domestic public resources.

Arab oil-rich countries noted a significant decline in revenues in recent years. While oil-rich countries rely heavily on oil and gas rents to finance its fiscal space, oil-poor countries use tax revenues for financing public budget. Mobilization of resources in this context remains inequitable among countries.

The room for raising direct taxation is limited – usually the mobilization or expansion of resources is drawn from tax reforms in goods and services products, in addition to imposing a burden on the poor and middle-classes. A possible alternative would be to create added valued tax.

In short, the expansion of fiscal space depends on systematic efforts on raising tax revenues. Harnessing the potential of tax revenues is key to mobilization of domestic resources, but short- and medium-term fiscal rules may already help. 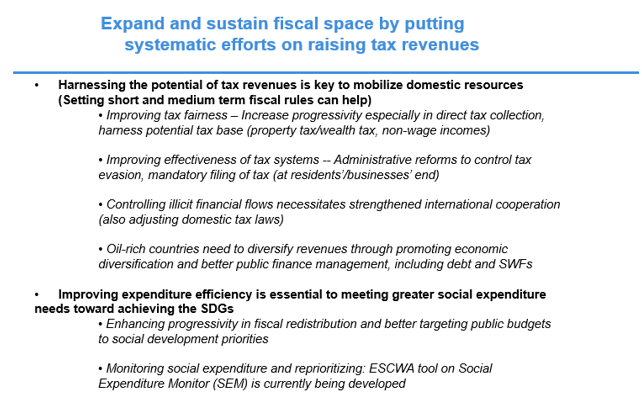 Despite progress in human development levels in Tunisia, children remains one of the most vulnerable groups in the country. Children represent 21% of the poor population and only 38% percent of children receive allowances from the country’s contributory system.

The TUCB programme seeks to target the poorest households as a result of the high levels of children living in poverty. The programme is considered efficient in targeting and administratively simple to implement, with lower costs than the ones involving subsidies. The programme is estimated to increase consumption of the poorest in 11.3% and reduce incidence of poverty by 2.4 percentage.

The higher concentration of children among the poorest population reveal a strong need for a social protection instruments capable of addressing child poverty and vulnerability. The high level of cost-effectiveness of the TUCB reinforces the justification for this type of benefit.

Fiscal space expansion for this programme would depend on increasing government revenues and on reallocation of public expenditure.

Providing adequate social protection to children is essential to ensure their well-being and increase human capital, particularly for the MENA region, in which they compose a large part of the population and rank among the world’s poorest. In order to ensure coverage and the sustainability of programmes, particularly in crisis contexts, countries must find the fiscal space to develop, maintain and expand their social protection systems.

You can watch the Q&A session from this webinar session here.

This blog is part of the Social Protection in the MENA region webinar series, which brings together the summaries of webinars organised by the International Policy Centre for Inclusive Growth (IPC-IG) and UNICEF MENA Regional Office. Please join the Online Community Social Protection in MENA if you are interested in following the most recent discussions on the topic. If you have any thoughts on this webinar summary, we would love to hear from you. Please add your comments below!