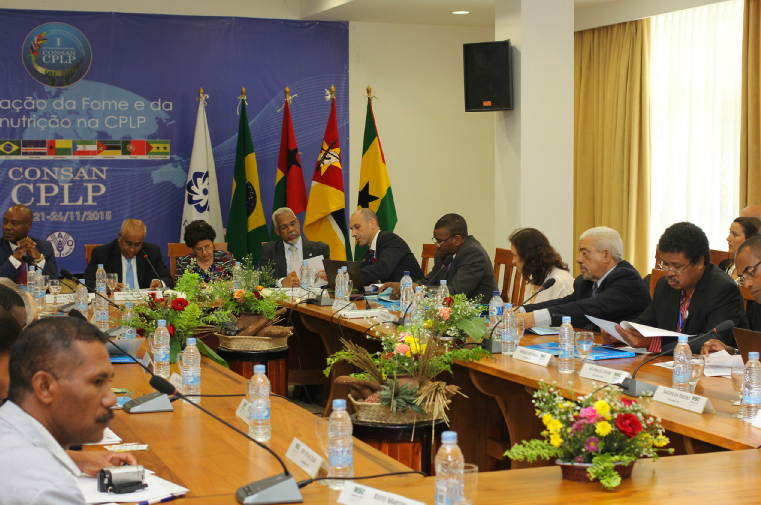 The Community of Portuguese Speaking Counties (CPLP) is an International Organization created in 1996, formed by Angola, Brazil, Cape Verde, Guinea Bissau, Mozambique, Portugal and Sao Tome e Prince in order to promote political and diplomatic agreement, the Portuguese Language, and cooperation in diverse areas. EastTimor and Equatorial Guinea Joint CPLP in 2002 and 2014, respectively.

Cooperation in Development is one of CPLP´s main activities, and food and nutritional security issues have been present in the organization´s agenda since its early age. Specially from 2005 onwards, the commitment of individual and collective actors, such as nongovernmental organizations, civil society networks, United Nations agencies, donors, as well as key actors in some Community countries, have made food and nutrition security a central topic in the Member´s agendas and  for the Community as a whole.

In fact, the Strategy formulation and approval represents a cumulative process that resulted from the combination of the following factors: (i) civil society mobilization and the personal commitment of some actors with political capital within Member States, Civil society and FAO; (Ii) the growing political recognition of problems related to poverty, such as hunger, on the national and international level; (Iii) the increasing Knowledge sharing and mutual learning in recent years in the area, facilitated by the existence of a common language, both at the level of governments and civil society, as well as the encouragement of consultants from different Community countries who work in conjunction with decision-makers in the Member States and the Organization; (Iv) the UN World Food Security Committee reform process and the strong recommendation for strengthening governance in the fight against hunger; V) Brazil´s  international visibility in the fight against hunger was also relevant (Sarmento and Pinto, 2015).

The launch of a regional Strategy for Food and Nutritional Security was formally approved by the Member States in 2012. The Strategy, strongly supported by FAO, has as its overall goal to contribute to the eradication of hunger and poverty  taking into account a Human Right to Adequate Food approach by strengthening co-ordination among Member States and improving food and nutrition security policies and program governance. For this purpose, Member States have adopted as common principles of their individual and collective action the construction and reinforcement of legal and institutional frameworks, public policy building and strengthening, and the reinforcement of the need for strong budgetary frameworks.

The regional action is based on three axes:

1 - Strengthen food security and nutrition governance – Covers the creation and improvement of the existing multi-actor dialogue structures in each country, as well as the development of governance structures at the Community level.

Axis 3 - Increasing the internal food availability  based on small producers – The goal is to stimulate small farmers and fishermen to promote sustainable production models and increase the importance of local diets .

In despite of financing difficulties, political changes and instability in the Member States, which caused delay in projects implementation and general policy discussions, the Strategy had some achievements specially in the structuring of a regional platform for multi-stakeholder dialogue: the CPLP Food and Nutritional Security Council (CONSAN – CPLP in Portuguese).

The CPLP Food and Nutritional Security Council: A Multi-stakeholder Platform for regional dialogue

In terms of governance, two bodies linked to CPLP were established: the Food and Nutrition Security Council, and the Permanent Technical Secretariat (STP). CONSAN mirrors the World Food Council, which, in turn, in its reform process was inspired by the Brazilian National Food and Nutritional Security Council (CONSEA in Portuguese)[1]. The main objective of these structures is to seek chain alignment from the local to the global level with regards to the Voluntary Guidelines to support the progressive realization of the Right to Adequate Food in the context of national food security.

For this purpose, CONSAN is characterized as a cooperation mechanism, a ministerial and multi-stakeholder platform set up to coordinate policies and programs and to advise the CPLP Conference of Heads of State and Government. CONSAN has a Plenary Meeting, the maximum deliberative structure, held ordinarily at the CPLP Conference of Heads of State and Government or extraordinarily when approved by at least two-thirds of the Member States. The Presidency, the Working Groups and the Permanent Technical Secretariat managed by CPLP are also linked to  this Council. One third of the Plenary is composed by government representatives - Ministers of State and equivalent- and two thirds of representatives from other specific sectors Participation Mechanisms like Civil Society, Private Sector, Universities and Parliaments.

Each one of the above mentioned Mechanisms has it is own formation process according to the integration path built by its members. The most active and wellstructured so far is the Civil Society.

In fact, civil society representatives engaged in food and nutritional security actions in CPLP have been holding regular exchanges especially since 2007, when a regional network for food and nutritional security was officially formed in 2007 by the African Portuguese Seeking Countries (REDSAN-PALOP). The regional network was supported by the International Food and Nutritional Security Network, a project financed by the European Union and managed by Action Aid. Afterwards, Brazil, East Timor and Portugal joined the network and formed the CPLP Food and Nutritional Security Network (REDSAN-CPLP). In 2012, during Rio+20, the CPLP Peasants' Platform was launched. Therefore, representatives from these organizations participate in the Civil Society  Participation Mechanism.

The Civil Society Mechanism has been promoting advocacy work and is engaged in experience exchange with other CONSAN´s Mechanisms. It´s main demands are related to support for family farming and agroecology, social protection policies for vulnerable groups, topics which are strongly related to natural resources management, such as land governance.

As other main achievements, one should mention the creation of National Food and Nutritional Security Councils in Cape Verde, Guinea Bissau and Sao Tome, as well as the discussion for reforming the existing Council in East Timor. Currently, discussion in Angola and Mozambique are being held for creating national councils in these countries as well.

Besides the council´s creation, family farming became a central topic in CONSAN´s discussions. Therefore, a Family Farming Work Group was created. This work group is in charge of elaborating   a document with guidelines for supporting family farming in CPLP. The document received contributions of several stakeholders and is to be approved in the next CONSAN meeting scheduled for May 2017.

CPLP has held two editions of the Family Farming and Food Security Forum, the first in Sao Tome, in 2015, and the second in Lisbon, in the following year, with the participation of private sector and academia representatives from CONSAN´s Participation Mechanisms.

From the second Forum, besides the ongoing discussion on family farming identification[2] and on public purchase for school feeding programs, land governance gained attention and a discussion for approving a CPLP Pact for Improving Land Governance was initiated.

Although the institutionalization of a governance structure for food and nutritional security governance is to be considered a significant step for the Community, the Strategy suffers from lack of continuous financing and of political commitment to implement decisions agreed in CONSAN. The political instability in Brazil, one of the key contributors, is also a main concern presented in the Family Farming Forum.

Other challenges can be related to the newly created national council´s actual operational work and the promotion of social participation in these councils, as established. At the same time, it is important to consider how the Guidelines for Supporting Family Farming and the upcoming Pact on Land Governance can be useful for policy building and implementation in each country.