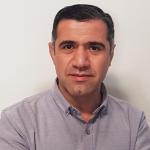 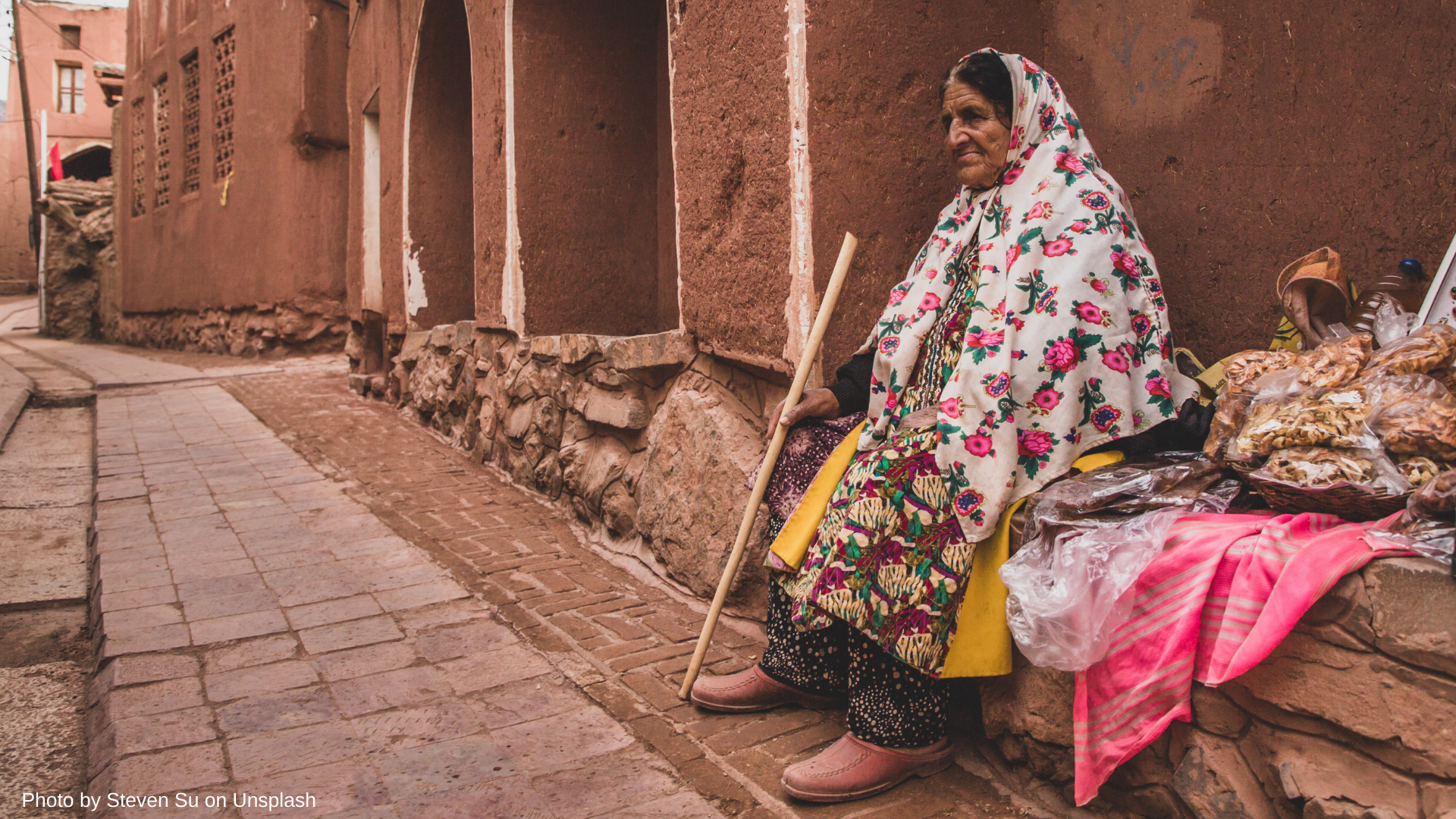 Firstly, it should be understood that decision making is a key element that can significantly change the ground. Decisions should not be based on policy makers’ personal perceptions, but reliable on evidences, that are a result of acceptable studies and proper methods. Policy makers need to be aware that decisions about social protection must be evidence-based, otherwise the effectiveness of the measures might be questionable. Therefore, it seems the process of decision-making needs to integrate accurate, processed and updated data, proper knowledge, and, more importantly, proportionate insight with a suitable approach to find the solution.

Given this context, the Saba Pension Strategies Institute (SPSI), a research body affiliated to Civil Servants Pension Fund (CSPF) in Iran, have been working towards studying and communicating its learnings to policy makers, advising them on possibilities for adapting the strategic direction of pension funds’ management in the country.

SPSI has conducted several research studies in the last five years, and has identified points for improvements in Iran’s pension system. However, this perception is not supported across the board by managers and policy makers, therefore, SPSI faces the challenge of communicating the issues and how to advocate for change. In the next sections, an overview of Iran’s pension system is presented, then we dive into its main challenges and finally, summarize the SPSI experience on researching and advocating for a new agenda.

Overview of the Iranian Pension System

Comprehensive social welfare system of Iran comprises three main schemes: social insurance, social assistance and relief. The Social insurance is a contributory scheme, hence it is financed by contribution paid by employees, employers and the government.  The main services are pensions (retirement, survivors, and disabled), which cover those who contribute in the scheme based on employment records (paid work or self-working). The second scheme, social assistance, is non-contributory and totally financed by government. It offers allowances for disabled people, orphans, widows and the unattended. Finally, the third scheme is mandated for rescuing and reliving the people who suffers from natural disasters.

In the mentioned system, 18 funds/organizations work as pension fund (Table 1), 12 organizations and foundations are active in the second scheme and 6 organizations are responsible for the relieving scheme. Moreover, it’s relevant to note that all organizations work along with government, who appoints the head persons directly and provides their partial or total budget. As SPSI focuses on pension schemes, the list of organizations which fund pension in the Iranian context are the following: 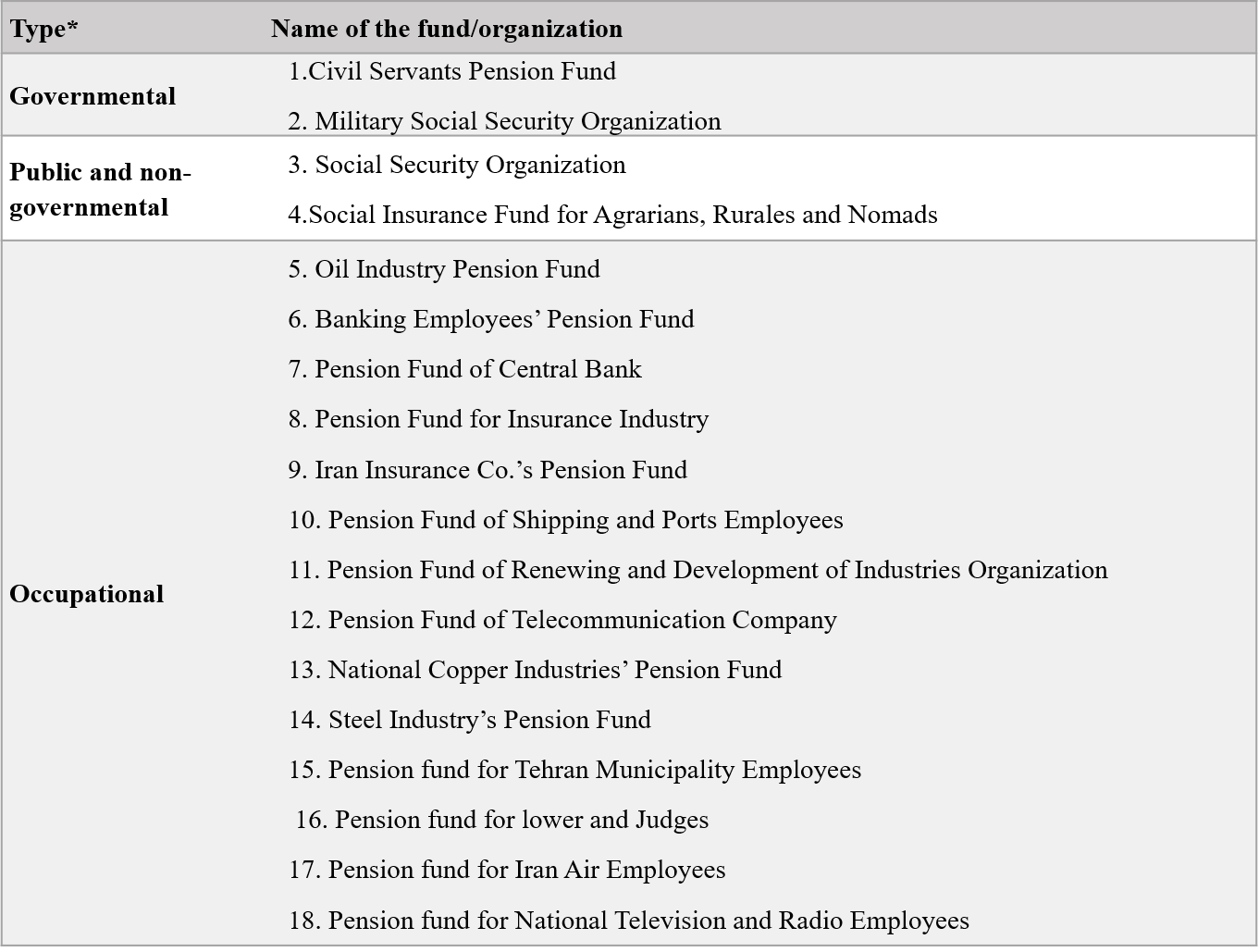 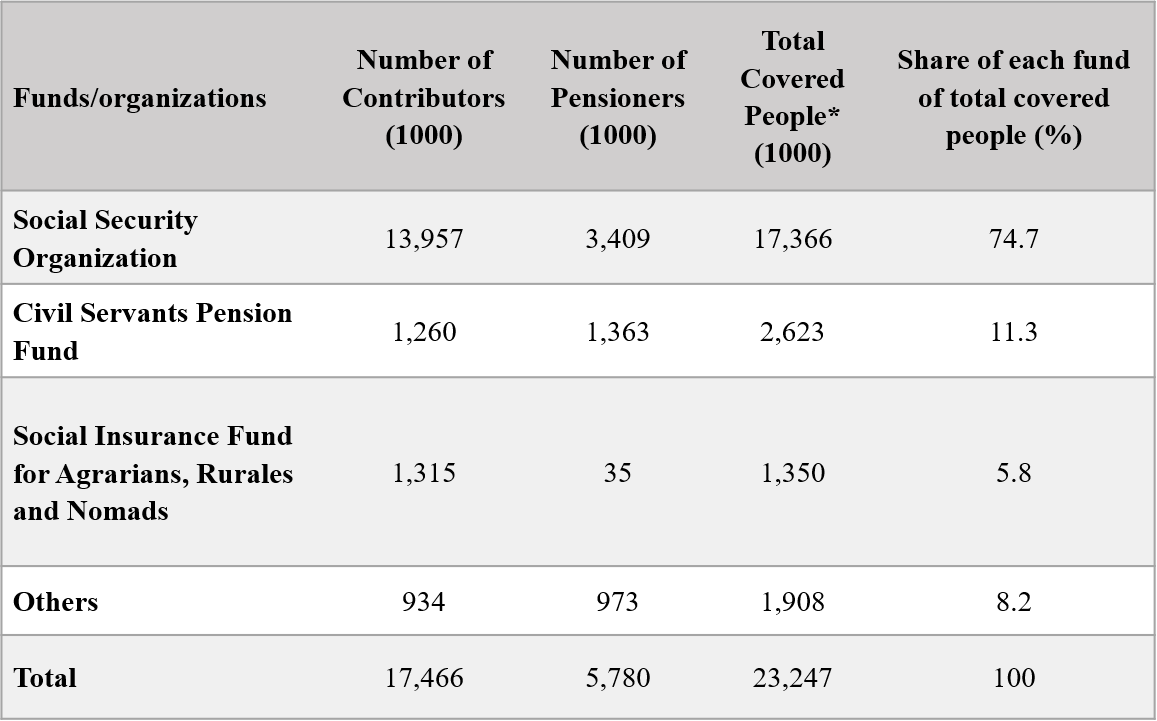 Source: Office of Board of Trustee of Pension Funds (2019); *Note: The Total Covered People refers to the sum of Contributors and Pensioners.

When it comes to numbers regarding the three schemes (table 2), it’s clear that the public and non-governmental organizations are responsible for financing the social protection coverage of most of the Iranian population[1] (85 million persons).

Legislation and challenges of Pension System

To understand the goals of the welfare system in Iran it is better to refer to the constitution of the country. There are seven articles among 177 that are related to welfare system. Although the most important article is No. 29[2], according to article No. 3[3] , the state of Iran is mandated to mobilize all resources to fulfill 16 goals, and the fourth one mentions access to free education (which is more emphasized in articles 30 and 31 respectively). Also, article No. 12 clearly notes at eradication of poverty and removing any kind of deprivation regarding to nutrition, housing, health and “expansion of [social] insurance”. This issue is more expanded in articles No. 43 and 45. Besides, article No. 21, the second phase, mentions to the right of mothers to have protection specially during pregnancy and after delivering the baby (Islamic Republic of Iran, 1979).

However, as noted before, the most important article in terms of welfare system, is No. 29. According to the article:

“(1) To benefit from social security with respect to retirement٫ unemployment٫ old age٫ disability٫ absence of a guardian٫ and benefits relating to being stranded٫ accidents٫ health services٫ and medical care and treatment٫ provided through insurance or other means٫ is accepted as a universal right. (2) The government must provide the foregoing services and financial support for every individual citizen by drawing٫ in accordance with the law٫ on the national revenues and funds obtained through public contributions.”

Therefore, it could be said that according to the constitution, the goal and objective of welfare system (including the pension benefit) is providing a “safety net” for all citizens by utilizing public resources. At the result, the benefits have to be: 1. Comprehensive, 2. Inclusive and 3. Adequate. But, in terms of pension funds, one more indicator has to be considered: sustainability.

Based on data, total coverage in Iran has increased from 29 per cent in 1971 to 65 percent in 2019 (in terms of working people). Also pension funds are providing vast types of benefits, which have positive results in terms of comprehensiveness of services. However, the big challenge is the lack of coverage among old-age people since, despite the progress, more than 50 per cent of the group still has no pension. Besides, inadequate pension benefit makes the situation harsher, because, in average, adequacy rate is less than 50 per cent. Almost all pension funds are ‘un-sustained’ financially since they rely on external sources to fix financial deficit, which is a national budget in terms of 4 major-big funds: Social Security Organization, Civil Servants Pension Fund, Military social Security Organization and Social Insurance Fund for Agrarians, Rurales and Nomads.

The SPSI was established as a research-based force for Civil Servants Pension Fund (CSPF) in February, 2017. The major focus of the institute is meant to be carrying out research studies and educational activities required by CSPF and its subsidiary corporations. To follow the defined mission, SPSI considers following strategies (Saba Pension Strategies Institute 2018a, 2018b, 2019, 2020a, 2020b, 2021):

Although SPSI has been trying to focus on the issues that offered by CSPF and be research body of the fund, a specific view within SPSI led to wider scope since SPSI believes that the problems of CSPF could not be understood and recognized well without a clear and deep cognition of a bigger picture which includes different strategies of ‘social protection system’. In other words, to think about a specific pension fund and find the way to improve the situation, a look at neighboring concepts is a must. In context, SPSI have been conducting more than 70 research studies (by outsourcing) and prepared more than 110 working papers. Besides, SPSI have published more than 60 books and held more than 30 discussion meeting. It is worth to mention all resources are available on the website full and free (https://saba-psi.ir/).

Based on studies done in/within SPSI, gradually a consensus is reached among the researchers (not including the managers and policy makers) that leads to an approach that differs from the one in the current in place in the pension system.

To sum it up, as mentioned above, researchers understand that the final goal of the entire system is providing comprehensive coverage with financial sustainability and adequate benefits. However:

Fortunately, the problem is considered not only by government, but also by parliament. Even more, the issue of the unsustainability of pension funds is announced publicly by the statesmen. Moreover, the issue named as one of the super challenges in sixth five years development plan.

In responding to the tough situation of pension system, a wide-range debate has been raised among experts and managers. Their recommendations (Saba Pension Strategies Institute 2018a, 2018b, 2019, 2020a, 2020b, 2021):could be categorized as follows:

Contrary to the above-mentioned recommendations, SPSI understand that none of them are enough to make the system sustainable. Although they are generally supported, two important subjects determine which one could be implemented: 1. Possibility of recommendation and 2. Impact on Sustainability. The first one is question of legal, political, social and economic situation, while the second is question of actuarial calculation. Therefore, when financial sustainability selected as the core goal of reform, any suggestion would be accepted and considered as a valid one when actuarial calculation prove the potential to make the fund (system) sustain. Concerning this base, in the case of CSPF (the oldest pension fund in Iran and the second biggest one), SPSI’s studies show that a parametric reform which change main parameters and last for 15 years in three phases just reduces 66 per cent of actuarial liability of the fund and 34% of actuarial deficit remains.

Also, policy makers state that pension funds have to improve the quality of investment to meet the deficit. But this approach also cannot be considered as a reform since investment improvement measures is not able to cover the deficit of liability. For instance, in the case of CSPF, the value of portfolio is just 2.5 per cent of actuarial liability. Besides, it should be noted that the economy suffers from chronic hyper-inflation for more than two decades which makes the situation much more difficult. Even if investment managers could improve the value of portfolio by 10 times still more that 70% of liability will remain.

When SPSI reached a consensus, they decided to promote the idea generally among the public and specifically among policy makers. Therefore, the Institute has focused on three major activities:

Although SPSI today is known as an institute focused on the field and has research-based approach to pension reform, there are also other challenges to be considered while promoting the Institute’s agenda.

At first, conventional approach to pension reform is not somehow fact based. It mainly repeats the literature without considering the capability of implementation, so convincing experts and managers to support the unusual idea is not easy.

The second challenge is fighting the discredit by some institutions with studies and precise research, as, in the past, pension funds have experienced several mismanagements, especially in investment.

The third challenge is explaining the ideas to the general public. SPSI believes that a public pension fund is a social-public issue so it has to be managed transparently. If the pension reform needs to change direction/approach, it has to be decided through a public debate. In that sense, SPSI has developed its website and social media channels to promote and disseminate an open discussion and also publishes related research results through infographics and motion graphics to make date more intelligible for the public.

[1]. It could be useful to note that the average family size is 3.3, so when 2.3247.000 people are covered, it could be considered that 76.7 million people are somehow under protection. It means almost 90 per cent of population is covered by at least one service. But immediately it has to be added that the percentage declines dramatically in terms of old aged and working people, 45 and 65 per cent respectively.

[2]. Article 29 is regulated by “the structure of welfare and social security act” which is passed by parliament in 2004.

[3]. Article No.3 of the Constitution mentions that “In order to attain the objectives specified in Article 2٫ the government of the Islamic Republic of Iran has the duty of directing all its resources to the following goals: (…)  3) free education and physical training for everyone at all levels٫ and the facilitation and expansion of higher education; (…) 12) the planning of a correct and just economic system٫ in accordance with Islamic criteria٫ in order to create welfare٫ eliminate poverty٫ and abolish all forms of deprivation with respect to food٫ housing٫ work٫ health care٫ and the provision of social insurance for all" (Islamic Republic of Iran, 1979).