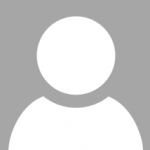 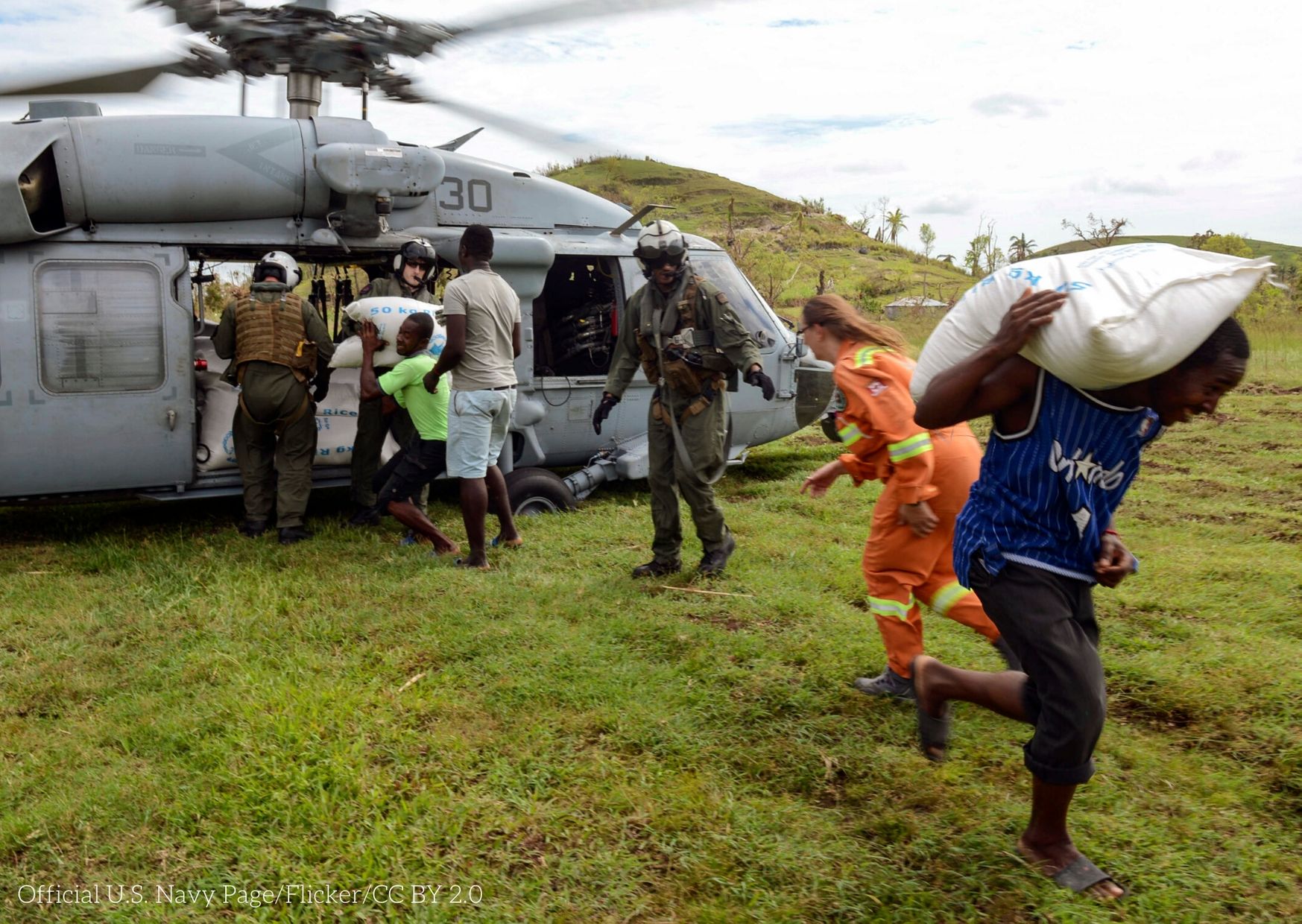 This blog is also available in French, please access the translated version here.

The increase in protracted crises, and the blurring of lines between humanitarian and development needs, is creating an imperative for humanitarian assistance to link to social protection (SP) systems. In fragile contexts, where SP systems are nascent or non-existent, humanitarian actors, alongside development actors, have a significant role to play in delivering Cash and Voucher Assistance (CVA) to meet a range of needs, and simultaneously have an opportunity and a responsibility to lay the foundations for national SP systems.

Structured around experiences in Haiti and Mali, the over-arching messages of the webinar were that humanitarian actors working on CVA should seize windows of opportunity to strengthen SP building blocks, but that addressing the fragmentation and complexity of SP service provision takes time and requires deep collaboration with a range of stakeholders, particularly in conflict environments. The case study presentations were structured around these guiding questions.

Clément Rouquette set the scene by introducing the Haiti context, which is characterized by high vulnerability to a multiplicity of shocks in against a background of chronic poverty and vulnerability. SP provision and coverage is weak, fragmented and under-funded, and safety nets are rare and yet to be institutionalized. Therefore, humanitarian and development actors play a key role in meeting chronic and crisis-related needs, and have a responsibility to coordinate amongst themselves and with the government.

Laurore Antoine explained how this context of chronic needs requires longer-term safety-net based assistance. He outlined how Kore Lavi, the SSN led by CARE between 2015 and 2019, emerged from experiences of providing CVA in response to the 2010 Earthquake and Hurricane Thomas. Kore Lavi’s safety net model was based on voucher-based food assistance at scale (18,000 households across five geographic departments of Haiti), using innovative measures, including collaboration with Digicel, one of Haiti’s largest telecommunications company, and strengthening local microfinance institutions and food vendors, resulting in a stronger and more resilient market system. This safety net was used for both horizontal and vertical expansion to respond to needs resulting from Hurricane Matthew (2016) and a 2015 drought.

Laurore summarized some of the operational advantages and drawbacks of the SSN model. 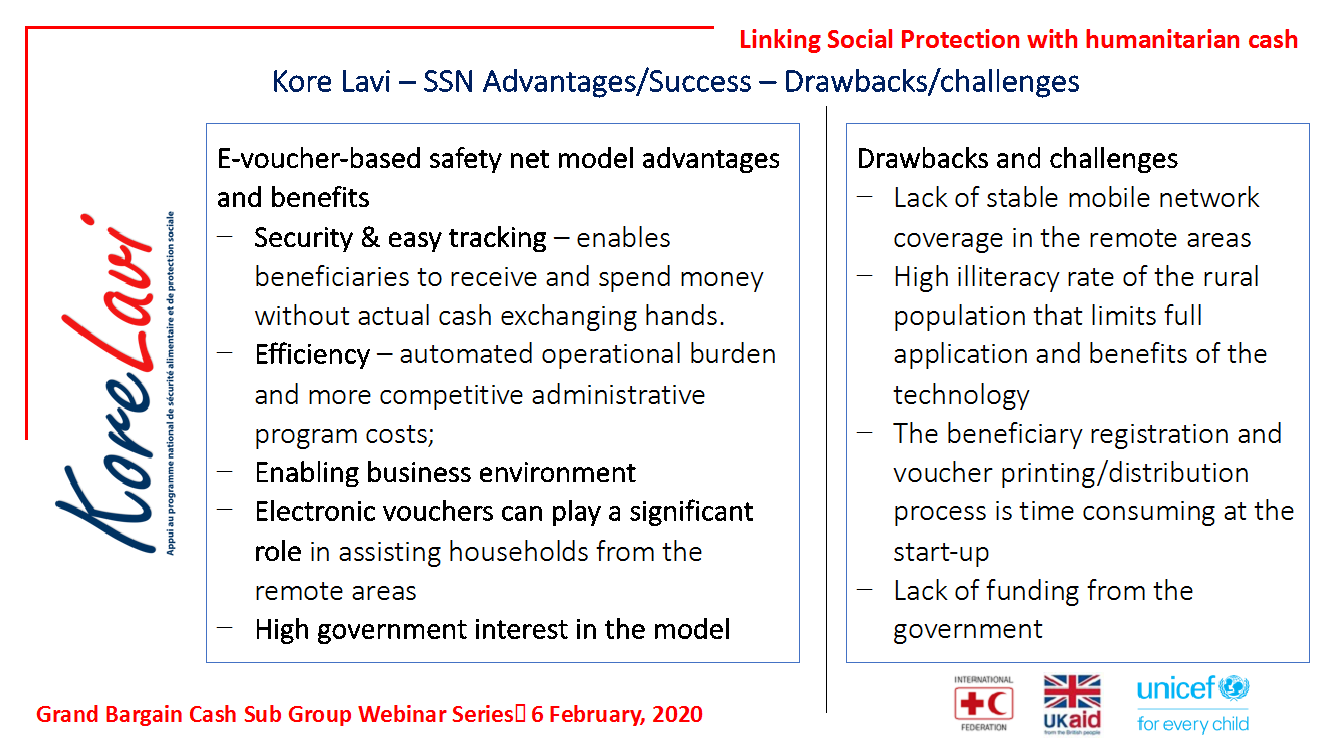 Of particular note, whilst there was government interest in the model and important progress in institutionalization, there was a lack of high-level policy commitment and associated funding from the government.

Institutionalization, including the development and usages of the SIMAST (vulnerability database)

As a component of the Kore Lavi program, WFP developed a tool (summarised below) to assess government institutionalization and identify and address capacity gaps. 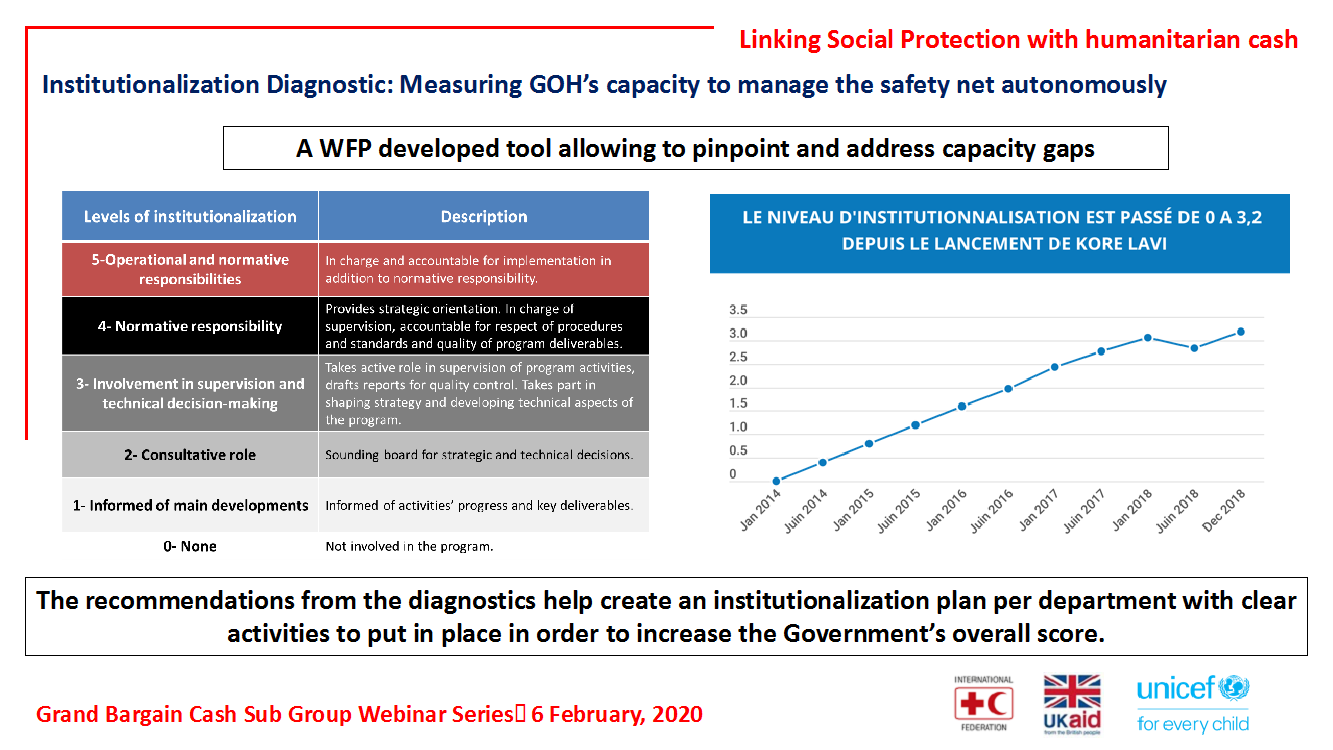 Another legacy of Kore Lavi is the Information System of the Ministry of Social Affairs and Labour (SIMAST), which builds on the vulnerability assessment and targeting process used for the voucher-based SSN. By mid-2020, with significant technical support from WFP,  its anticipated coverage will be 530,000 households, i.e. 23% of the population. This gives it the potential to be used as a national social registry, and for piggy-backing by humanitarian and development agencies.

The social protection policy: a common programmatic framework between the government and its partners

Kore Lavi has also been the entry point for WFP and CARE (on behalf of other humanitarian and development actors) to work with the government on the content and process to develop the national social protection and promotion policy. The policy provides a common programmatic framework between the government and its partners for the provision of short and long-term assistance. The diagram below presents where social transfers are included across the policy, and hence where the potential synergies with CVA are.

Clément concluded by stating that ‘business as usual’ (i.e. silos between humanitarian, development, and government-led assistance) is no longer an option. With the policy in place, the national government and its systems should be the entry point for assistance. Where this isn’t possible, humanitarian and development actors must invest in the development and roll-out of safety nets (such as Kore Lavi) while further strengthening and developing technical and analytical capacity at national and sub-national levels. Humanitarian donors and International Financial Institutions (IFIs) have a key role in supporting these investments.

Sigrid Kühlke introduced the Mali context, which is characterized by recurrent covariate shocks, including recurrent droughts since the 1980s, sudden-onset flooding and epidemics such as measles. These have been compounded by conflict since the 2012 coup d’état, resulting in forced displacement (internal and external). These vulnerabilities are aggravated by structural poor governance and major inequalities, with Northern pastoral areas being the most neglected. This combination of factors has resulted in catastrophic human(itarian) indicators, requiring strong investments from the humanitarian side to ensure minimum service delivery

SP thinking in Mali emerged from responding to increasingly recurrent food and nutrition crises since the 1980s’ droughts. Social protection was initially predominantly focused on contributory health insurance.  In terms of non-contributory cash transfer programmes, it was only from 2013 onwards that the World Bank (WB) supported the government to develop the ‘Jigisemejiri’ programme, by setting up a Project Implementation Unit (PIU) within the Finance Ministry. 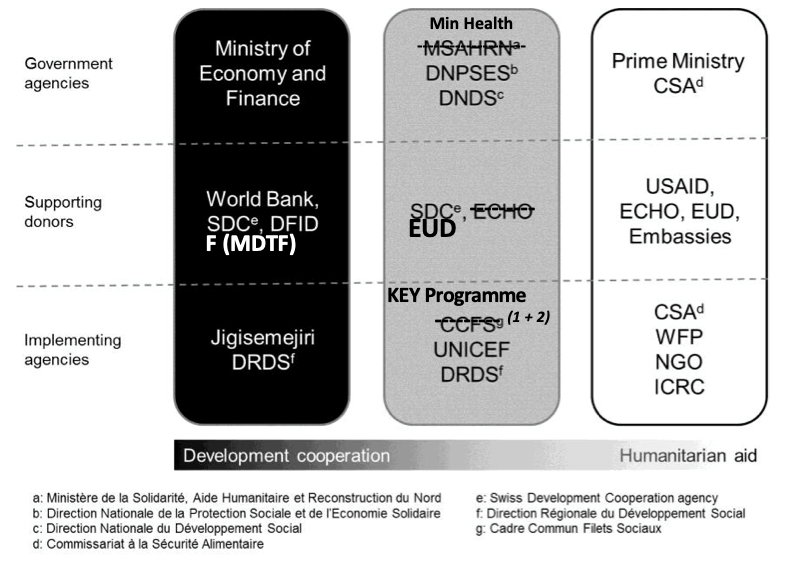 Overall, the SP system is rather fragmented, with different social transfer mechanisms established and anchored in different ministries, supported by different donors. This underscores the importance for humanitarians of understanding the political economy related to SP, i.e. mapping the stakeholders and their interests, with a view to identifying possible ‘shared space’.

Sigrid presented the investments made on the humanitarian side over the past years, structured around the building blocks of SP systems. 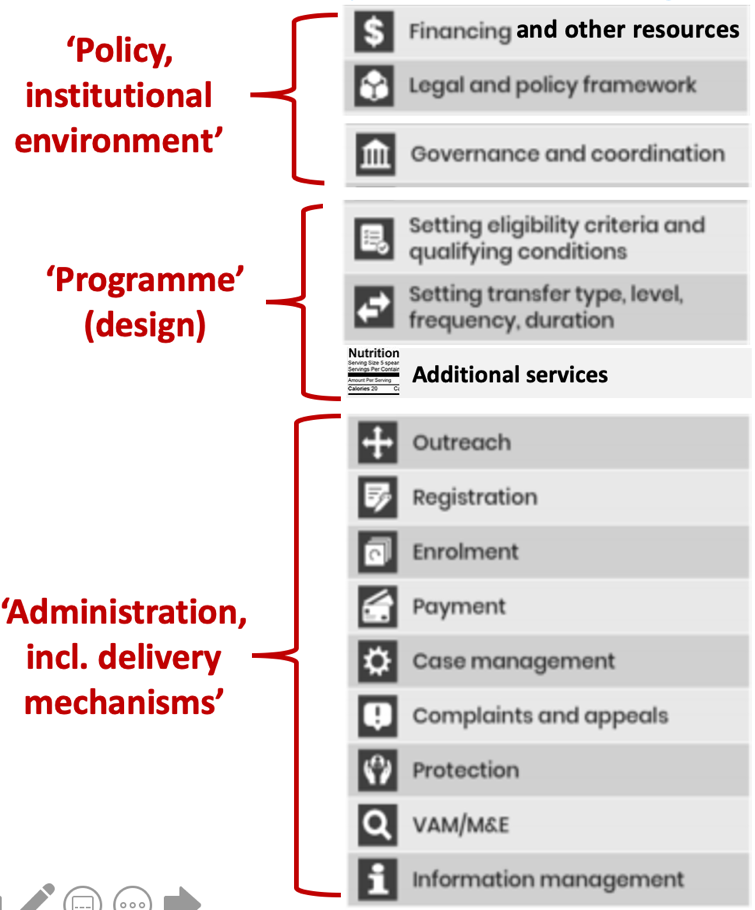 On the policy side, there has been a clear role for humanitarians in the elaboration of the national social protection policy and action plan, and the national food security policy.

Related to resources, humanitarians were guided by humanitarian principles. They used parallel systems and direct delivery in acute conflict-areas, and support to government structures in the area of human resources and logistics (e.g. on targeting)  in calmer areas with technical staff presence. Humanitarian funding has remained parallel, as there was a lack of convergence and coverage of programmes and no reliable funding channels in place.

On the programme design side, humanitarians invested heavily in dialogue with the National Food Security Commission and the Jigisemejiri programme on standards for targeting, transfer value and frequency; coverage especially in conflict-affected areas; as well as the provision of additional complementary services (e.g. nutritional screening).

In terms of administration/delivery systems, there was a commitment from the WB-side to build a social registry that could be used by humanitarians as well, avoiding the need to retarget every year and reducing inclusion/exclusion errors. Joint work was carried out on the legislative framework, on a ‘unified questionnaire’, and on data collection, with humanitarian funding enabling data collection from over 1 million individuals, based on a complete household census across the northern regions. Data protection was a key concern which humanitarians managed to influence.

Marion Saurel built on Sigrid’s overview to reflect on the progress made 5 years on from these significant investments, in a context of worsening conflict and other shocks such as frequent localized droughts. Overall there has been a real slow down in investment in national social protection systems from the government-side, be it in response to food crises or to structural poverty, leaving larger gaps than before, which can only be partially filled by international actors.

On the policy front, whilst there are multiple documents and commitments, these are not systematically disseminated and applied. Coordination groups are not working as effectively as before. Humanitarian CVA interventions are now focusing on high-risk areas and acute humanitarian needs, without linkages to local government structures in line with humanitarian principles. On a positive note, since 2016 humanitarian CVA has started to be taken over by some development donors, providing longer-term safety nets for populations and more predictable funding for NGOs.

In terms of programme design, no harmonization was reached between humanitarian CVA and Jigisemejiri programme, partly due to different objectives, but also to the lack of flexibility of WB procedures. The government social safety net division could play a greater role in harmonization.

Related to shock-response, there are improvements regarding the early-warning system, including a more diversified set of indicators and more robust baseline information. A complementary Rapid Response Mechanism (RRM) has been set up under humanitarian leadership for rapid onset, conflict-related shocks.

Alignment on administration also remains challenging. The unified questionnaire was approved in 2017 and the Social Registry (SR) finally launched end 2019, but access to population data is still not effective, and the registry is not universal. The data collected by humanitarian actors in the past was eventually not used by the SR Unit. On a positive note, other development actors, beyond the WB, are now supporting the data collection, such as EUDEL. The payment methods of the Jigisemejiri programme are still not flexible enough to allow the programme to extend to conflict- or sensitive areas in which mobile money or even other modalities would be more adapted (and are used by humanitarians). Data protection remains a challenge, as there are still uncertainties in the application of the data protection protocol.

On balance, progress has been slow and challenging on common technical standards and long-term national financial commitments to develop a cohesive shock-responsive SP system.

The challenge of the nexus and the implications for humanitarian actors

Marion reflected on the possibility of finding a shared space between humanitarian, development and government actors in support of a national SP system. This is essential in a protracted crisis where there is no linearity from humanitarian assistance to development interventions. This requires common sectorial analyses, commitment to build on existing investments, as well as flexibility and pragmatism in financing modalities. 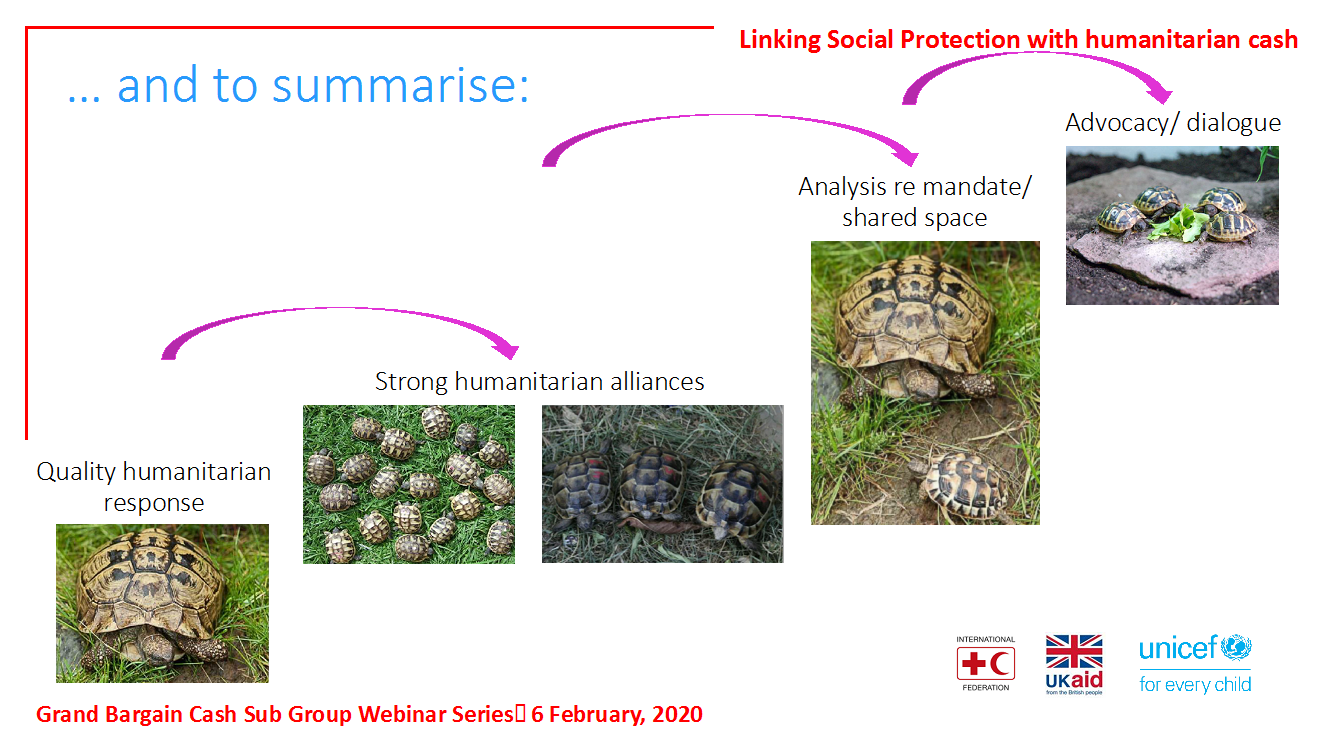 Sigrid wrapped up by suggesting key steps to follow for humanitarians.

The context-specific resources referenced in the presentation are the following:

This blog post is part of the Linking Social Protection with humanitarian cash webinar series, which brings together the summaries of webinars organized by IFRC, UNICEF and DFID on the topic. To set the scene, don’t forget to watch the foundational webinar on this topic: Demystifying the entry points for humanitarians. If you have any thoughts on this webinar summary or the whole series, we would love to hear from you. Please add your comments below!