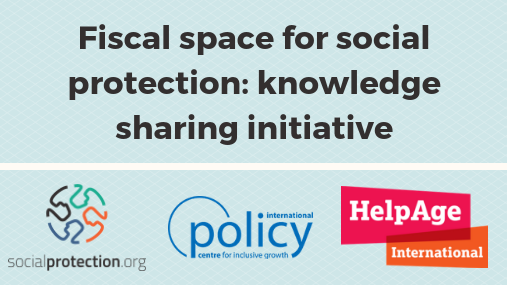 In the developing world, impetus towards expanding social protection over the last twenty years has also generated concern over the sustainable financing of these programmes and systems. Though social protection spending in Low and Middle income countries has increased in the period, these countries still have space for increasing this expenditure and their revenues through taxation. [1]

International development agencies are also putting financing at the center of the debates. At the 7th Social Protection Inter-agency Cooperation Board (November 2015) Financing for Development was one of the main issues in the agenda: “fiscal sustainability grounded on effective and sustainable domestic resources mobilization strategies should be at the core of the social protection policy design”. [2]

END_OF_DOCUMENT_TOKEN_TO_BE_REPLACED

Thank you to all of those who joined the webinar "Inequality and Redistribution: Taxes and Transfers"! Here is a summary of the questions raised during the webinar and some insights from the webinar's organization team.

1. Q: Could you please tell us more about the experience in Mexico and Chile? How is their tax structure?

2. Q: Must taxes be higher for quality public services? How is this measured in terms of how the majority of the poor population are mutually integrated?

3. Q: What are pensions’ impact in inequality reduction?

This is a very good question, and needs to be put into context. First, pensions as we typically refer to them are often contributory pensions, wherein individuals delay using their income earnings and instead defer them into an account which public or private providers of pensions services then invest to bring in a return to fund pension obligations. This is the case of consumption smoothing. It is essentially moving the wealth in the higher income part of one’s life to the low income portion of one’s life to reduce individual temporal inequality. On the other hand, and specifically for defined benefit schemes, the effect is such that a floor is created wherein some contributors who will pay in the minimum amount of contributions to the scheme will receive the same (or relatively so) amount of annuity as those who pay in more – thus equalizing to a degree their income inequality. Social pensions, on the other hand, are often not considered as traditional pensions because they are financed and funded through general taxation and not conditioned on contribution histories – at least not in the formal sense of direct linkages; it could be argued that taxes paid over the course of one’s life and non-financial contributions to society should also merit consideration for eligibility. In addition, many government employees across the world do not contribute directly to their pensions – e.g. some judges and armed forces personnel. The redistributional impact of social pensions are well documented and their impacts on inequality are becoming more and more understood as the debate opens up and new research investigates these forms of income transfer. In Georgia, for instance, the country’s universal social pension was shown to be much more effective at reducing income inequality in houses with children than the child transfer – indicating that the transitive benefits of interceding at old ages has significant spillover effects which other forms of transfers may not. However, the redistributional power of social pensions lies in how the scheme is designed to work within the overall pension [system], and this needs to be emphasized. Social pensions are not the silver bullet, but they are a fundamental component to the solution of effective social protection systems.

4. Q: Could you elaborate a bit on the role of the informal economy (very often poor) and if that is considered tax evasion? Are there mechanisms for mainstreaming the informal sector into the formal sector for the attainment of equity?

The matter of informality is possibly one of the major issues of the time. We must keep in mind that informality is not necessarily tax evasion, though it may travel with tax evasion. Informality must itself be understood as it is not just a state of not paying taxes, it is also a state of not being regulated or protected by the government. Thus, informality is a function of gaps in governance and regulation; as such we must be careful to not lump informal workers into a simplified category of tax evaders. Additionally, as has been seen across Latin America, the burden of resolution may fall on the tax systems themselves, instead of the individual or firms. Making taxes easier to pay and more transparent in their return to payers is one route out of the informality puzzle – as we have seen with the monotax scheme in Uruguay. As WIEGO and others have shown, successful incorporation of informal workers is a process that needs to incorporate what workers want in order to agree to comply with trusting the state with their incomes, and take into account what the state (i.e. the collective population of workers and non-workers) requires from those it wishes to tax. This has been repeated in calls reusing the slogan “nothing about us without us” – that is, governments cannot make laws without taking into account the views and demands of workers themselves, and this is a partnership that has worked historically well in such places such as the Scandinavian countries where workers representation helps to underpin universal social protection and adequate employment levels – to various degrees. For the case of older age income security, this is a major issue as much of the disadvantage faced in later life is predicated on the failure of the state to have incorporated workers in ways that benefits current and future generations.